Research Roundup: Why Kids Have More Protection Against COVID-19 & More 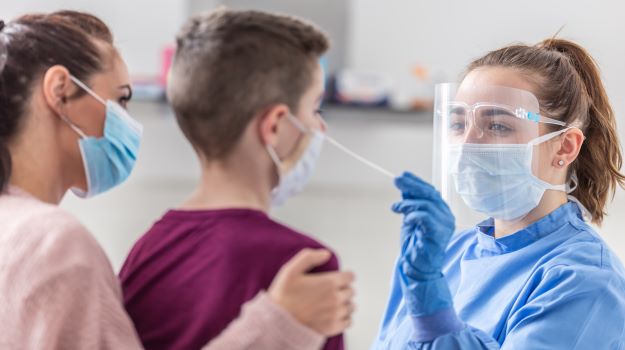 COVID-19 came with plenty of mysteries, some of which have been resolved, and many that haven't. One mystery since the beginning of the pandemic was why children seemed much less susceptible to the virus than adults. For that and more research news, continue reading.

Why Kids May Have More Protection Against COVID-19

Generally, children are less at risk of COVID-19 infection than adults - not immune, but less likely to be infected and less likely to have severe disease. But why?

Researchers at the University of Queensland, Australia, suggest that children's nasal lining, or the nasal epithelium, inhibits infection and replication, particularly of the original Wuhan wild-type strain of SARS-CoV-2 and the Delta variant. However, the Omicron variant and its subvariants do not seem to have the same issue. They published their research in PLOS Biology.

"We have provided the first experimental evidence that the pediatric nasal epithelium may play an important role in reducing the susceptibility of children to SARS-CoV-2," the authors wrote. "The data strongly suggest that the nasal epithelium of children is distinct and that it may afford children some level of protection from ancestral SARS-CoV-2."

They found that the wild-type virus replicated less efficiently and was linked to an increased antiviral response in the nasal epithelial cells of children. The effect was also seen with the Delta variant, but not with the Omicron. They also found that Omicron replicated better in pediatric nasal epithelial cells than the wildtype or Delta, although they caution that this was a small study and may reflect how the virus is evolving.

Researchers at the Hebrew University of Jerusalem have identified a group of molecules that help cells repair damaged components. Impaired mitophagy is associated with various aging-associated diseases, such as Alzheimer's and Parkinson's, as well as sarcopenia.

Augmenting mitophagy, where defective mitochondria are removed and replaced by new ones, is an emerging strategy for treating the elderly. The researchers designed and tested a family of compounds related to spermidine, a known mitophagy-promoting agent. A prototype, 1,8-diaminooctane (VL-004), was better than spermidine in its ability to induce mitophagy and protect against oxidative stress.

The research was published in the journal Autophagy. The researchers founded a biotech company, Vitalunga, that is working to develop the drug.

A study from the University of Pittsburg found a subset of white blood cells, a novel subset of CD8+ regulatory-like T cells (CD8+TRLs), that appear to confer fast-acting and lasting protection against ischemic stroke in mice.

These cells were attracted to the site of ischemic injury by a unique "homing" signal produced by the damaged brain cells. The CD8+TRLs reached the brain 24 hours after the stroke, then released molecules that provide direct neuroprotective effects and knock down inflammation and secondary brain damage.

In the mice studies, the animals who received a transfusion of purified CD8+TRLs did better and recovered faster than the untreated mice over five weeks. The CD8+TRLs appear to act as early responders to alert and recruit defenses after a stroke.

Researchers at the University of California San Diego School of Medicine report that gene therapy in animal models of ALS measurably delayed disease onset. Although most ALS cases are of unknown cause, the mouse and rat models were of an inherited form of ALS.

The therapy involved an AAV-vector carrying synapsin-Caveolin-1 cDNA into the spinal cords of the mice. The SynCav1 protected and preserved spinal cord motor neurons and added to the mice's longevity. They speculate that SynCav1 might serve as novel gene therapy for ALS and other forms of CNS disease.

Amyotrophic lateral sclerosis (ALS) is a neurodegenerative disease marked by progressive loss of motor neurons in the brain and spinal cord. It is fatal, and there are no cures.

Researchers at the Tokyo University of Science identified a potential new therapeutic target for colorectal tumors.

Inflammatory bowel disease (IBD), which includes Crohn's disease and ulcerative colitis, can often lead to colorectal tumors. Innate immune receptors, such as C-type lectin receptors (CLRs), are responsible for the development of IBD. But they also play a key role in regulating gut microbiota and defending against pathogens.

One of those CLRs is a dendritic cell immunoreceptor (DCIR), responsible for maintaining the homeostasis of the immune and skeletal systems. Working with mice, the researchers found that mice without DCIR had less colitis severity and AOM-DSS-induced colorectal tumor growth. They found that using an antibody called anti-NA2 against asialo-biantennary-N-glycans (NA2), which binds to DCIR, decreased colitis symptoms and prevented colorectal tumor growth.

A study out of Tufts University and the University of Oxford strengthened the association between specific viral infections and Alzheimer's disease. Two common viruses can lie dormant in brain cells — herpes simplex virus (HSV) and varicella-zoster virus (VZV); the latter is associated with shingles and chickenpox.

Researchers leveraged 3D human tissue culture models to mimic the brain and demonstrated that VZV may activate HSV to lay the groundwork for the early stages of Alzheimer's disease. HSV-1, the primary variant of HSV, when activated, leads to the accumulation of tau and amyloid-beta proteins, which are implicated in Alzheimer's disease. They published their research in the Journal of Alzheimer's Disease.

"Our results suggest one pathway to Alzheimer's disease, caused by a VZV infection which creates inflammatory triggers that awaken HSV in the brain," Dana Cairns, Ph.D., GBS12, a research associate in the Biomedical Engineering Department at Tufts, said. "While we demonstrated a link between VZV and HSV-1 activation, it's possible that other inflammatory events in the brain could also awaken HSV-1 and lead to Alzheimer's Disease."