NeuroRx on the Move: An Interview with Founder and CEO Jonathan Javitt 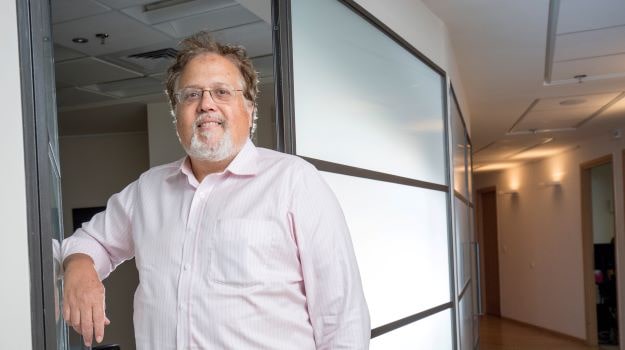 Like many biopharma companies, the global COVID-19 pandemic has caused delays while also offering opportunities for NeuroRx. The company is based in Radnor, Pennsylvania, and typically is focused on the central nervous system space, developing NRX-100/NRX-101, for suicidal bipolar depression and other neurological disorders.

Those trials, however, were suspended because of the pandemic. But, during the pandemic, NeuroRx partnered with Relief Therapeutics to develop RLF-100 (aviptadil) to treat respiratory failure in patients with critical COVID-19.

Jonathan Javitt, founder and chief executive officer of NeuroRx, took time out to speak with BioSpace from Israel, where he has been since lockdown. The new year is likely to be a big one for the company, with promising data for aviptadil, a return to trials for NRX-101 and an announced merger with Big Rock Partners.

The company’s focus, as mentioned above, was on NRX-100 and NRX-101. NRX-101 is a proprietary, oral fixed-dose combination of two FDA-approved drugs, D-cycloserine, an NMDA receptor modulator, and Lurasidone (Latuda), a 5-HT2a receptor antagonist. NRX-100 is ketamine, an anesthetic approved for surgical procedures, but not approved for psychiatric indications.

The two drugs are used together beginning with a single infusion of ketamine followed at approximately six weeks by daily oral NRX-101. “We hope,” Javitt said, “they will be effective for bipolar depression, major depression disorder and post-traumatic stress disorder (PTSD), especially in people who have suicidal ideation. We’ve received Breakthrough Therapy Designation and Fast Track Designation by the FDA. We’ve also received a Biomarker Letter of Support from the FDA.”

This letter documented that NeuroRx had shared evidence of increased glutamine and glutamate (Glx) levels associated with oral dosing of D-cycloserine, which has not been seen with serotonin-targeted therapies (SSRI) used for depression.

The company initiated a Phase IIb/III trial for the drug in July 2019 at JPS Health Network (JPS) in Fort Worth, Texas. Unfortunately, Javitt said, “We determined that it’s not possible to meet our safety obligations to patients who have suicidal depression in the midst of a lockdown. These are people who we need to be able to reach out and touch at a moment’s notice if they have a crisis. So we suspended enrollment in the trial until the pandemic subsides a bit. We hope to be able to get to the data readout by the end of this year.”

In March 2020, NeuroRx partnered with Relief Therapeutics for a Phase II trial of aviptadil to treat acute and moderate respiratory distress in COVID-19 patients. Aviptadil is a synthetic form of Vasoactive Intestinal Peptide (VIP) made up of 28 amino acids, with the brand name Zyesami. It was first discovered in 1970 and has a 20-year history of safe use in humans in multiple clinical trials for sarcoidosis, pulmonary fibrosis, asthma/allergy, and pulmonary hypertension. In the context of treating COVID-19, it has documented potent anti-inflammatory and anti-cytokine activity in animal models of respiratory distress, acute lung injury and inflammation.

The trial’s Data Safety Monitoring Board has reviewed the trial data twice and both times declared it safe to continue. Javitt says, “We expect topline data at the end of the month and that may well trigger regulatory action if we have a positive readout.”

While the drug is being studied, it has been granted use of Expanded Access Programs (EAPs), also known as Compassionate Use. Of 319 companies developing COVID-19 treatments, only 20 have created EAPs to treat the sickest patients, and NeuroRx is one of them.

On October 13, 2020, Relief Therapeutics and NeuroRx announced topline data from 45 patients assessed in an open-label trial of 21 patients in ICU with critical COVID-19 and respiratory failure. They were treated with aviptadil and compared to 24 control patients in the same setting. Overall, 81% of the patients receiving aviptadil survived beyond 60 days, compared to 17% of control patients. Patient receiving the drug demonstrated a 9-fold increased probability of survival and recovery from respiratory failure, with a high degree of statistical significance.

A clinical trial is expected to start this month at Cantonal Hospital, Baselland (Switzerland) with an inhaled formulation to prevent COVID-19-related ARDS. They are also in talks with the Department of Health and Human Services and BARDA to supply the drug for studies of inhaled aviptadil compared to other drugs in COVID-19.

Also, on December 14, 2020, Big Rock Partners Acquisition Corp. and NeuroRx entered into a merger agreement. The two companies plan to merge and trade on the Nasdaq Stock Market under the NRXP ticker symbol.

“The advantage of the merger,” Javitt says, “is that it enables their shareholders to participate in our company, and it gives us a public listing for our shareholders and others who would like to be part of our company.”

Aviptadil was never approved in the U.S. It was discovered by Sami Said and Viktor Mutt in 1970. After some initial successes in the early 2000s for hypertension and ARDS that were not duplicated, the drug has languished. Nonclinical studies show that VIP is highly concentrated in the lung and specifically binds to the ATII cell, where it prevents NMDA-induced caspase-3 activation in the lung, inhibits IL6 and TNFalpha production. All of these suggest it could demonstrate benefit in COVID-19. Because it is naturally found in the lung and other parts of the body, it does not appear to have any human toxicity. It would also have a very lost cost of manufacture compared to proprietary biologics.

Javitt says, “I think we built a team of people who are extraordinarily good at taking assets that big pharma has not been willing to develop. In the case of aviptadil, it is a generic molecule that had potentially great medical value but limited commercial value.” I think we’ve found a path to take this kind of known asset to patients and potentially to the marketplace in a highly cost-efficient manner that could change the pharmaceutical paradigm of a billion-dollar development program.”