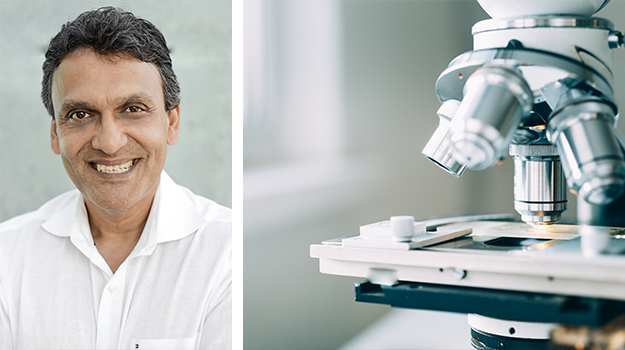 Fueled by $37 million in Series A financing, N.C.-based Inceptor Bio is advancing three next-generation approaches to immuno-oncology, including a CAR-T program that is expected to be in the clinic next year.

Inceptor Bio is developing multiple next-generation cell and gene therapy platforms to deliver cures for underserved and difficult-to-treat cancers. Its lead program is a CAR-T approach that will initially be developed for an indication that is undisclosed at this time. The two-year-old company is also developing a CAR-Macrophage (CAR-M) program, as well as a CAR-Natural Killer (NK) program, creating a diversified approach to immuno-oncology that enhances cell performance in the tumor microenvironment, Chief Executive Officer Shailesh Maingi told BioSpace Friday morning.

Noting that cancer is the most complex medical problem we face, he said Inceptor’s mission is to develop cell therapies that can potentially cure cancer in many patients. There are approximately 18 million new diagnoses of cancer each year and about 10 million people die from the disease annually.

“This is a disease that affects almost everybody, directly or indirectly. Think about it this way, your heart beats about 30 million times each year. Each time your heart beats, someone is either dying or getting diagnosed with cancer,” Maingi said.

While cell and gene therapies are still a nascent approach to targeting different diseases, Maingi said they represent the next wave of medicine. He still remembers being a 19-year-old biology student hearing about the discovery of T-cells from his professor. He said he remembered being a naïve science student and wanted to know if they were called T cells because they looked like a T. Looking back, he expressed awe at how quickly science has moved within his lifetime.

“It’s amazing that something we were talking about that was discovered when I was a science student we’re now weaponizing against cancer,” he said.

He explained that cell and gene therapies are designed to enable the body’s immune system, which is often battered and weakened by the disease, to ramp up its defenses and fight the cancerous cells. He called the immune system a “symphony of different effector cells working in concert” to fight off disease.

Maingi said Inceptor is taking a three-pronged approach to immuno-oncology because of the complexities and the disease and the not knowing which approach will win out against a tumor. Inceptor’s next-generation approach aims to overcome some of the current limitations of CAR-T therapies that are used as last resort treatments for many patients. While the existing CAR-Ts can elicit significant responses in those patients, Maingi noted that about half of those patients end up seeing their cancer eventually return.

“We want to Increase the persistence and durability of T cells to improve those responses,” he said.

While current CAR-T therapies are only approved for hematological cancers, Maingi said the Holy Grail is to develop treatments for solid tumors, which comprise about 85% of all cancer diagnoses. Through its research, Inceptor has discovered a novel subset of T cells that show remarkable persistence that could be a key to unlocking an effective approach to solid tumors.

Maingi said the company anticipates taking its CAR-T into the clinic next year and its CAR-M and CAR-NK programs will follow over the following 18 months. In all, Inceptor’s novel technologies include a co-stimulatory domain M83, a proprietary TMax manufacturing process and the K62 platform, which increases the phagocytic capabilities of macrophages and supports an M1 anti-tumor phenotype, and a differentiated iPSC technology.

Alongside the development of its cell therapy approaches, Inceptor has also bolstered its manufacturing capabilities. Rather than rely on a contract development management organization, Maingi said the company wanted to avoid any potential supply chain bottlenecks. Last year, the company acquired Arranta Bio, a CDMO and its 29,000 square foot, state-of-the-art cell and gene therapy GMP manufacturing facility in Florida, which included 30 employees to support its Advanced Manufacturing Platform (AMP+). The clinical manufacturing site is in the process of being transformed to support cell therapy processes and clinical supply for Inceptor Bio's planned oncology clinical trials.

In addition to advancing its R&D programs and completing the conversion of its new manufacturing facility, Maingi said the company will also use the finances to continue scaling the company. Currently, Inceptor Bio has 47 employees across its North Carolina and Florida sites. By the end of 2022, he anticipates the company to have about 53 employees. Within three years, as Inceptor enters the clinic with its CAR-T, CAR-M and CAR-NK programs, Maingi anticipates the number of employees will soar to approximately 150 people.

The Series A was led by Kineticos Venture and supported by other, unnamed investors. Coupled with existing finances, Maingi said the company has enough cash runway to support its efforts through next year.

In a statement, Mike Nicholson, president and chief operating officer of Inceptor, said the funding will allow the company to focus its efforts on advancing its cell therapy programs and help it prepare to become a clinical-stage company.

“Our programs address serious challenges in the cell therapy arena, and fully realizing the potential of these therapies requires significant capital. We are grateful for the support of this incredible group of investors,” Nicholson said.