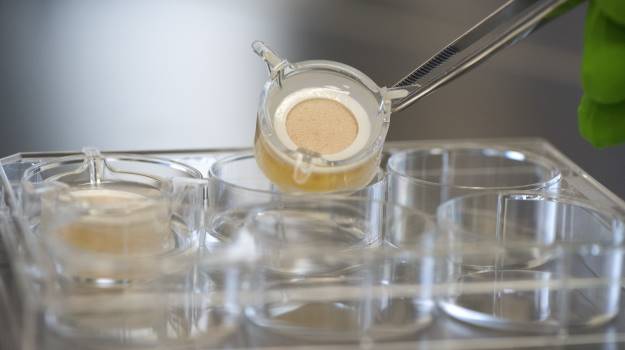 Skin is the window into the human body, and subtle changes often intimate the onset of disease. For drug development, access to large quantities of actual human skin sourced from surgical procedures has the potential to replace a significant portion of the animal testing done today. One day, it may even replace much of the preliminary testing that currently requires humans.

Genoskin is an innovator in this field, preparing and providing donated human skin for use in pharmaceutical and cosmetic testing, where it can tan, heal, grow hair and react to vaccines and drugs. The skin is donated by patients undergoing tummy tucks and other cosmetic surgeries, with their full consent. Genoskin then stabilizes this tissue – which otherwise would be destroyed – for use in several application-specific products.

One of the big benefits of this option is the ability to test compounds in human tissue very early in their development. “The best humanized mouse model is still not the same as a human,” Eric Merle, chief business innovation officer at Genoskin, told BioSpace. “Skin is a human organ, so the data that can be generated using it is much more relevant to drug development and research than that generated in animal models.” In these samples, antigen-presenting cells and other immune cells are active.

Genoskin’s products have limits, of course. As yet, they cannot replicate tests on a complete, living human. The company is working towards that, though. It is simulating circulation using microfluidics, and is using machine learning to contextualize other data sets (in relation to evidence in the skin), so more can be learned from this organ.

During its early days, the decade-old company aimed to replace animal testing. “Today, we aim to also be an alternative to human testing,” Merle said. “Drug development needs to be safer, faster and less expensive. You can’t humanely use humans as guinea pigs…and you can’t effectively use guinea pigs as humans.”

Genoskin’s solution – and that of many companies – is to develop the technologies to replace animals and humans in clinical studies with virtual models, steadily pushing living creatures further and further from testing until, finally, they are only needed to validate established results.

Genoskin recently partnered with Catalyst Biosciences to characterize the effects of novel formulations of one of its Phase II pipeline drugs in which there were initially injection site reactions. Catalyst leveraged Genoskin’s platform and expertise to identify a formulation without such reactions. The formulation is now moving forward in its clinical development. The change in formulation may – by reducing pain or side effects – affect a drug's commercial success or patient compliance. Genoskin also has published data with GSK, Sanofi, Unilever, and LEO Pharma.

NativeSkin, with the epidermis and dermis, was the company’s first product. “As the technology developed, we added HypoSkin, which includes those layers and a layer of fat to enable injections. Adding the layer of adipose tissue was a big challenge because it collapses when it warms much beyond room temperature under its own weight. So, we developed a gel matrix to enable it to maintain its structure at 37°C,” Merle said.

More recently, FlowSkin was developed to add circulation to the tissue. “We created microfluidics in which flow is catheterized into the tissue,” he explained. “For InflammaSkin, we recreated a psoriasis-like tissue inflammation – a Th17/Th1 type of inflammation – to enable researchers to look at anti-inflammatories to address those particular problems.”

Tissue samples can be selected by age, gender, ethnicity, and other factors, enabling responses to be determined in a matter of weeks. With these options, companies can access scores of skin samples ranging in size from 2 to 23 millimeters, all from the same person.

“They can generate a tremendous amount of data, looking at minute changes of formulations and how they affect the same patient,” Merle said. This means companies can adjust formulations without having to recruit additional clinical trial participants, thus speeding development timeframes. The U.S. Food and Drug Administration invited Genoskin to present on the use of this technology, thus signaling an openness to its use.

With approximately 200,000 abdominoplasties performed in the U.S. each year, as well as other surgeries, Genoskin has access to fresh skin daily. “The tissue can live seven days after it’s stabilized,” Merle said. “We will offer a 10-day experimental window soon.”

Genoskin has been self-funded, growing through grants and partnerships. In the near future, it plans to launch Series A fundraising to support its growth into artificial intelligence in the quest for full, human outcomes. “We aim to be leaders in virtual clinical trials,” Merle said.

One of the first steps, he shared, is to develop an injectable drug atlas that details how the top 200 drugs react when injected into a human. “I had a conversation with a leading vaccine manufacturer who told me that although they knew the end result and could detect antibodies, what actually happened during the first steps – after the injection – was a black box.

“By answering that part,” Merle said, “maybe scientists can make links between things they weren’t necessarily thinking about.”