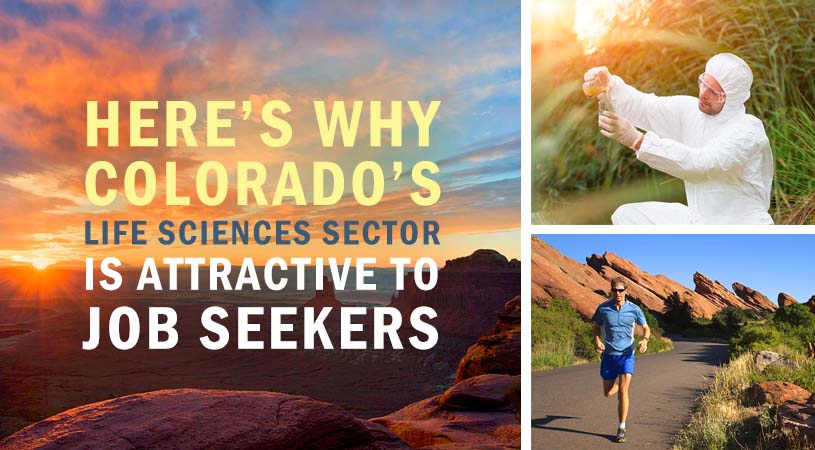 Colorado is generally not the state one thinks of when the subject of hot areas in biopharma comes up. Boston, yes; San Francisco Bay Area, sure. But Colorado?

But a recent report by professional services and investment management firm JLL found that Colorado—specifically the Denver and Boulder areas—are a rapidly growing area for biopharma. In fact, the JLL Life Sciences Report ranked the Denver/Boulder biotech market as #13 in the country based on life sciences employment, employment growth, venture capital funding, National Institutes of Health funding and several other criteria.

The report states, “Across the board, nearly all sectors of the life sciences industry are growing in Denver. This is most notable in the pharmaceuticals sector, which has experienced employment contraction in three of the past five years. The sheer amount of time and capital required to turn a profit, coupled with a challenging regulatory environment, have been factors in regional companies choosing to consolidate.”

Colorado ranks second in the U.S. for an educated workforce—41.3 percent of college graduates and 90.5 percent of high school graduates. It also has, according to the JLL report, “a consistent, high flow of in-migration (that) has boosted the workforce from which companies can recruit.”

April Giles, president and chief executive officer of the Colorado BioScience Association (CBSA), told BioSpace that Colorado “has a lot of talent here that understands the industry, and research institutions that biopharma likes to be aligned with. For instance, AstraZeneca purchased Amgen ’s facility in Boulder and recently made the announcement that they also purchased the Amgen facility in Longmont. When you talk to them, they talk a lot about their ability to attract the right talent into their company as they grow their manufacturing presence here.”

And Colorado has plenty of high-quality research institutions as well. Derek Cole, head of investor relations for ARCA Biopharma, based in Westminster, Colorado, between Denver and Boulder, said, “One of the main things that drives the area is the strength of the university research. We’ve got great universities and institutions like the University of Colorado, National Jewish Health and Colorado State University. There’s also been a big focus on attracting the right people to the area.”

The JLL report indicates that appropriate lab space in the Denver area is hard to come by, noting that, “Existing, in-place infrastructure in lab buildings are extremely scarce, so life sciences companies will often use second-generation restaurant space or clean tech space. Often smaller users must opt to share lab space.”

Despite that, there is some building and incubator-type locations. One is the Fitzsimons Innovation Campus in Aurora, a suburb of Denver. The 184-acre campus has advanced, state-of-the art research and lab facilities and is home to a 60,000-square-foot bioscience incubator and an additional 30,000 square feet of Accelerator space. The incubator space has 15 pre-build labs, 21 executive office suits and a number of shared services and amenities. It is affiliated with the University of Colorado and is adjacent to the Anschutz Medical Campus.

The JLL report also indicates that another healthcare technology campus called “Stride” is being built in the River North neighborhood of Denver.

The state also has one of only 13 “Select Agent” biocontainment facilities in the U.S. The Rocky Mountain Regional Biocontainment Laboratory (RMRBL) is located in the Judson Harper Research Complex on the Colorado State University Foothills Campus. In addition to CSU researchers, it provides space to the Health and Human Services Region VII, which encompasses Colorado, Utah, Montana, Wyoming, North Dakota and South Dakota.

And in April 2015, the Gates Biomanufacturing Facility opened on the U of C Anschutz Medical Campus. The facility serves academic, clinical and commercial researchers, both Colorado-based and nationwide that want to translate their discoveries into clinical-grade products that can be used for human investigations. It is a 14,000-square-foot Good Manufacturing Practice (GMP) facility located in the Bioscience Park Center, part of the Fitzimons Innovation Campus.

A Look at ARCA Biopharma

ARCA Biopharma is located in Brookfield, halfway between Denver and Boulder. It was founded in 2004 by Michael Bristow, who is currently president and chief executive officer. Bristow is a professor of Medicine and former Head of Cardiology at the University of Colorado Health Sciences Center. He also one of the founders of Myogen, where he acted as the company’s chief science and medical officer from 1996 through 2006, and as scientific advisor from February 2006 until it was acquired by Gilead Sciences in November 2006 for about $2.5 billion. 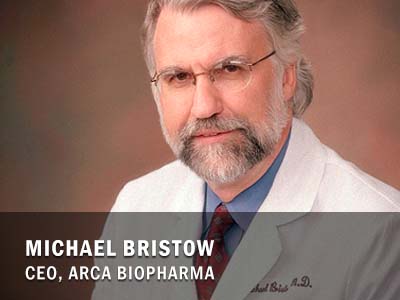 Tom Keuer, ARCA’s chief operating officer, told BioSpace, “We’re focused on developing targeted personalized therapies in the cardiovascular space.” He notes that Bristow and Myogen were “a success story for the area and for him. I think we have a strong area leadership team and board of directors. Several of our leadership team were also involved with Myogen and that success. Our team carries with it a lot of expertise in cardiovascular development and regulatory approvals.”

The company’s Gencaro is currently in a Phase IIb/III multi-center, randomized, double-blind, adaptive design trial in patients that have HFREF (a specific type of heart failure), a history of paroxysmal atrial fibrillation (AF) or persistent AF, as well as a beta-1389 arginine homozygous genotype. Keuer says, “Gencaro is unique in how it interacts with a specific genetic polymorphism in human heart receptors. Early clinical studies with Gencaro showed that when the drug is targeted to the most favorable genotype, which represents over 50 percent of the overall patient population, there’s a differential response of about 74 percent in the onset of AF in these patients.”

So both ARCA and Myogen indicate something similar to the Colorado biotech space. First, the founders have a connection to Colorado, which makes sense. ARCA benefited from many of the experienced people in the area who were associated with Myogen. 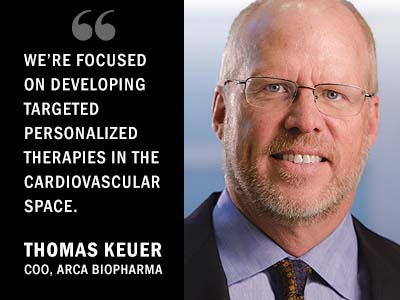 Cole also points out something of what he feels is an overarching trend in the Colorado biotech industry represented by Myogen. “Part of the reason I think we are a lower-sized cluster is that the technology is so good and the companies get going rapidly, but they get acquired. They’ll get acquired, the facility hangs around for a while, then, like Myogen, Gilead pulls everything back to California. That happens time and time again.”

But it’s not the only migration. Giles mentions a company called Sharklet Technologies that was founded in Florida in 2007 and moved to Aurora’s Anschutz Medical Campus in 2010. She said, “They wanted to be in a community that valued the work they were doing and that being in an Entrepreneurial center like Boulder and Denver would add a greater relevancy, better connections, and just a community overall that understood what they were doing.”

The company’s chief executive officer, Mark Spiecker, said in a 2013 article by The Colorado Health Foundation, “Many factors went into our decision. The Denver area has good public transit and excellent air transportation. At the Bioscience Park, there is more than 100,000 square feet of space, with state-of-the-art laboratories already built out and equipment in place.”

Some Facts and Figures

It doesn’t seem like Cambridge, Massachusetts or the San Francisco Bay Area have much to fear from Colorado. Still, for biotech startups and workers interested in the Rocky Mountain high, there are more than 600 bioscience companies in the state, with about 27,000 people in the industry, which creates more than 122,000 direct and indirect jobs. The average annual wage, according to the CBSA, is $84,000. On average, Colorado research institutions spin out about 20 new bioscience companies each year, and the medical device sector ranks number six in the country.

In addition, the State’s Bioscience Discovery Evaluation Grant Program has awarded 220 grants worth more than $27 million, which created 45 new companies. Although not the top in the country, the venture capital investment is sizable, totaling $1.625 billion in the last five years, and ranks fourth in the country for funds raised per worker from the SBIR grant program.

It has also been ranked as number seven nationally in mobile digital health care, with approximately 125 companies in that space.

Cole also notes that the state and the governor’s office are very supportive of life science research. Giles agrees, saying, “The state believes in the value of bioscience and continually invests in early-stage companies through grant programs. But also, the governor and the leadership of the state recognize and constantly promote what is happening here in Colorado.”

But at the root of it all, Giles thinks part of the reason the biotech business is booming in Colorado has to do with the overall mindset. “Colorado has always been a state that believes in independence and people who like to do things their way and are willing to work hard to make great things happen. It’s been embedded in who we are as a state and is continued to be fostered in these industries now.”