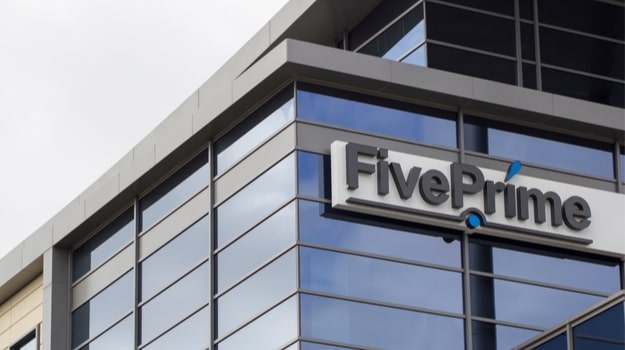 In its global, randomized, double-blind, placebo-controlled Phase II FIGHT trial, median progression-free survival (PFS) improved from 7.4 months in the placebo arm to 9.5 months when bemarituzumab (bema, FPA144) was combined with chemotherapy. Median overall survival ascended from 12.9 months to the point where the patients were still alive at the time the data was announced.

“What the study did was show the patient’s tumors grew slower, which is progression-free survival, they lived longer, and their tumors shrunk. And it’s really rare that you have a therapy that does all three of those in a Phase II trial,” Five Prime President and Chief Executive Officer Thomas Civik told BioSpace. “This is the program that the organization has been working on for almost a decade, and the amount of effort, energy, persistence that’s gone into getting us to this point, it’s what stories are made of.”

Five Prime Therapeutics is clinical-stage biotechnology company developing novel immuno-oncology protein therapeutics for the treatment of a wide range of serious diseases including gastric, breast, ovarian and endometrial cancers. Shares of Five Prime soared by as much as 349% on Wednesday with the breakthrough announcement.

Gastric cancer is the fifth most prevalent cancer in the world and is most often diagnosed in the advanced stages when it has already metastasized to other areas of the body. Early detection is critical as 5-year survival rates vary greatly between localized gastric cancer, at 69%, as opposed to after it has spread to the surrounding tissues or organs, where 5-year survival stands at just 31%.

Bemarituzumab is a first-in-class targeted antibody going after the target FGFR2b, which is overexpressed in approximately 30% of HER2- gastric cancers. There are currently no approved HER2-directed therapies.

The FIGHT trial results could be a monumental step forward in the treatment of gastric cancer.

“The immediate next step is that we need to take all this wonderful data that we have and we need to get it ready to present at a medical conference very soon,” Civik said. “Number two is we’d like to go talk to the regulatory authorities across the world on what are the next steps. We’ve got some really interesting data in a group of patients where there is an enormous unmet need and we want to use them as strategic thought partners on what we should do next.”

Given the gravity of this unmet need, is the potential there for Five Prime to seek emergency use authorization (EUA) for bemarituzumab?

“The trial was not designed to be a label enabling study so I want maybe to caution the exuberance, if you will, for the great results that we’re seeing,” Civik said. “I think we owe it to the investigators and the patients and all the people that have worked on this program to have that conversation with the regulatory agencies.”

The announcement provides a spark of optimism for the treatment of other cancers as well, including squamous non-small cell lung cancer, triple negative breast cancer, ovarian cancer, and pancreatic cancer. Five Prime, along with Roche Tissue Diagnostics, has identified FGFR2b as also being overexpressed in these tumor types.

“Benefit was observed in patients whose tumors overexpressed FGFR2b, even without evidence of amplification, and that may broaden the therapeutic potential of bemarituzumab in more cancer types,” said Five Prime Executive Vice President and Chief Medical Officer, Helen Collins, M.D. “We are excited about the results of the FIGHT trial and the opportunity to advance the development of bemarituzumab, the first and only investigational treatment targeting FGFR2b+.”