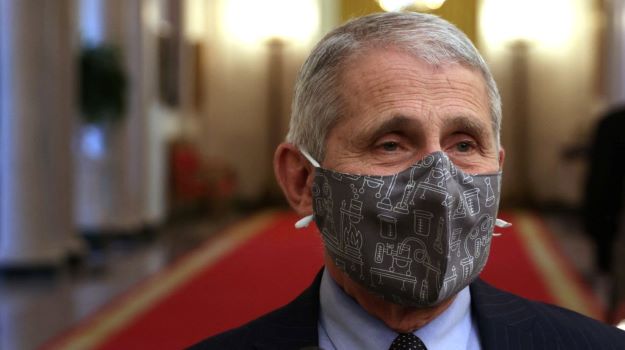 Anthony Fauci, director of the U.S. National Institute of Allergy and Infectious Diseases (NIAID), told NBC’s “Meet the Press” that he expected a decision on the Johnson & Johnson COVID-19 vaccine would be made by Friday, April 23. The vaccine distribution has been paused in the country because of six or seven cases of rare blood clots.

“I doubt very seriously if they just cancel” the J&J vaccine, Fauci said, adding that he would be surprised “if we don’t have a resumption in some form by Friday. One of the possibilities would be to bring them back, but to do it with some form of restriction or some form of warning.”

The U.S. Centers for Disease Control and Prevention (CDC) and the U.S. Food and Drug Administration (FDA) recommended the pause on April 13 after identifying six cases in the U.S. of a “rare and severe” type of blood clot that seemed to be linked to the J&J vaccine. The specific type of clots is cerebral venous sinus thrombosis (CVST) combined with low levels of blood platelets, called thrombocytopenia.

The cases were in women between 18 and 48 years of age and occurred six to 13 days after receiving the shot. There was also a report of a seventh case, but the woman was older, and the type of clot appeared to be different.

This particular type of clotting also responds poorly to the typical treatment of the anticoagulant heparin.

Fauci, speaking Sunday on CNN’s “State of the Union,” said, “I won’t want to get ahead of the CDC and the FDA and the advisory committee, but I would imagine that what we will say is: that it would come back and it would come back in some sort of either warning or restriction.”

The FDA’s Advisory Committee on Immunization Practices (ACIP) met on April 14 to discuss the issue but did not make a recommendation, saying they needed additional information about the clots. The committee is meeting again on April 23.

There have been approximately 222 suspected blood clots in Europe, with more than 30 deaths associated with the AstraZeneca-Oxford vaccine, out of about 34 million vaccinations. The clots, in this case, are pulmonary embolism, deep vein thrombosis (DVT) or thrombocytopenia.

Although the link between the vaccines and the blood clots is not fully determined, the likely mechanism is hypothesized to be connected to clot-promoting platelet factor 4 (PF4). A study published in the New England Journal of Medicine by researchers out of the UK on the AstraZeneca-Oxford cases found that 21 patients had antibodies for PF4. Functional heparin-induced thrombocytopenia (HIT) testing also showed positive PF4 results in five of seven patients tested.

HIT is when the immune system generates antibodies to a complex of heparin and PF4. This complex causes platelets to form clots throughout the body. The theory is that each dose of the vaccines contains about 50 billion virus particles. Some of those might break into pieces and spread their DNA, which has a negative charge, just like heparin. PF4 has a positive charge, so the negative-positive combination causes them to bind together, which might trigger the production of antibodies, which would signal an increase in blood coagulation.

Why the two vaccines, if they are the cause of the clotting, would cause different types of blood clots is unknown.

Johnson & Johnson suggested that there was clotting associated with the Pfizer-BioNTech and Moderna vaccines as well, noting a study published in the American Journal of Hematology in February.

However, the study’s lead author pushed back, saying, “We didn’t find anyone with blood clots,” according to Eun-Ju Lee, an assistant professor of medicine at Weill Cornell Medical College. “We didn’t find any of those scary things that are happening with Johnson & Johnson.”

The study did analyze people who had experienced low blood platelet levels, not blood clots, but Lee said, “those are entirely different entities. It’s like apples and oranges.”

That study had found reports of 17 people who experienced low blood platelet levels after receiving the Pfizer or Moderna vaccine. They also concluded that this data was “not surprising” when more than 30 million people had received at least the first dose of either of the vaccines, and thrombocytopenia is not uncommon.