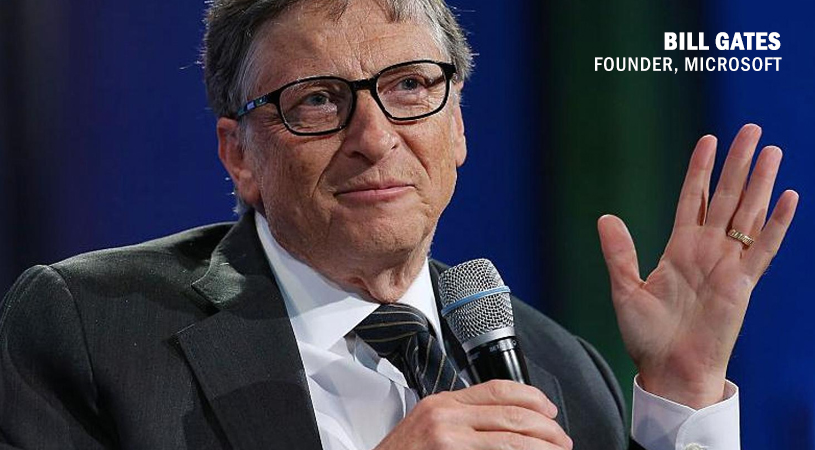 Bill Gates famously dropped out of Harvard University to found Microsoft. Speaking last week at Columbia University with Warren Buffett, a student in the audience asked him what would cause him to drop out of school today? He provided three answers.

But let’s back up just a little bit. Preceding the question, Gates had been saying that in 1975, he was lucky. Computers were a hobby, one he was obsessed with, and that the timing of starting a computer company at the time computers were beginning to revolutionize the world was good luck.

Gates doesn’t advocate dropping out of school. On the contrary, the Bill and Melinda Gates Foundation invests heavily in education in the U.S. However, he selected three areas where, if he were starting out today, he might pursue a career.

Gates said,“The work in artificial intelligence today is at a really profound level. It is going to be phenomenal, so anything connected with that I think would be an exciting lifetime career.”

This was pretty much Gates saying that if he were to do something in computers, it would probably be in AI. He specifically cited Google DeepMind recently beating a top player in Go. He also said, “The ability for artificial agents to read and understand material is going to be phenomenal. Anything connected with that would be an exciting lifetime career.”

And consistent with that, The Chan Zuckerberg Initiative, founded by Priscilla Chan, a physician, and her husband, Facebook chief executive officer Mark Zuckerberg, recently acquired Toronto, Ontario-based AI company Meta. The Chan Zuckerberg Initiative was launched with a $3 billion, 10-year pledge with the goal of curing, preventing or managing all diseases by the end of the century. Meta’s AI technology can read and comprehend scientific papers at a high speed, providing insights and connections.

Gates then mentioned energy, noting the demand for energy that is “reliable, cheap, and clean.” In this regard, Gates is in line with Tesla chief executive officer Elon Musk, who has recently begun developing solar roof tiles. In late October 2016, Musk discussed his solar initiative, SolarCity, with roofs made completely out of solar cells that also integrate components from his electric cars. The solar tiles are made of glass. If and when his solar roof goes on general sale, it will have an integrated home battery called Powerwall 2.0 as well as a Tesla charger.

And most relevant to this readership, Gates mentioned biotech, which he noted was “moving faster than ever.” That’s not a new interest on Gates’ part. His foundation is deeply into healthcare projects worldwide, and he specifically mentioned DNA vaccines. In September 2016, he led a $14 million funding round in Pennsylvania-based Renmatix, a biotech company that is working on biofuels, cover the ground in both biotech and the energy sector.

He’s also invested in Editas Medicine , which is utilizing CRISPR-Cas9 to develop gene editing-based therapeutics. One of his biotech investment successes was Palo Alto, Calif.-based Anacor Pharmaceuticals , which was acquired by Pfizer in May 2016 for $5.2 billion. The Bill & Melinda Gates Foundation was an early investor in the company in 2013, and had a 2 percent equity stake in the company.

Gates has also weighed in on this year’s political rhetoric about drug pricing in a Bloomberg interview in June 2016, saying, “The current system is better than most other systems one can imagine … The drug companies are turning out miracles, and we need their R&D budgets to stay strong. They need to see the opportunity.”