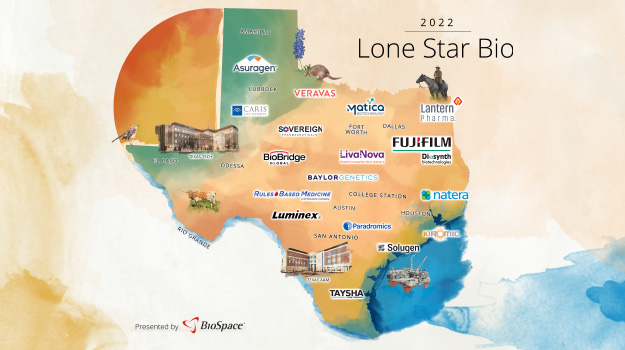 Known as the Lone Star Bio Hotbed, Texas is a hub for major players in the life sciences industry and is currently a prime location for new and expanding pharma and biotech companies.

As BioSpace previously reported, the lone star state’s life sciences hubs are the largest in prominent cities like Houston and Dallas, which is where the shared lab network BioLabs is located. Austin and San Antonio are quickly becoming powerhouses in the industry as well.

This increase in innovation and interest in the state is largely due to what many are calling the “great migration” to Texas. According to The San Antonio Business Journal, Texas ranks first in the number of net domestic migrants. This means the number of people moving into the state far outweighs those moving out.

Many of these migrants come from other technology hubs in the U.S., especially those on the west coast. In fact, 42% of domestic migrants to Texas come from California.

Many believe this great migration was sparked by Elon Musk. In October 2021, the Tesla CEO announced he was moving Tesla’s headquarters from Silicon Valley to Austin, Texas, stating that California provided little room for growth.

The lone star state houses headquarters for some of the largest corporations in the country, like ExxonMobil, AT&T and Dell Technologies, all of which rank near the top of the Fortune 500 list.

As for the life science industry, Texas is quickly becoming a major hub for pharma and biotech companies alike, including Mckesson, FUJIFILM Corporation, BridgeBio, Cassava Sciences and many more. Here’s a look at the top companies hiring now in the lone star state.

McKesson is currently the largest drug distributor in the United States. As BioSpace previously reported, the company announced plans to move its headquarters to Las Colinas, Texas in 2019, stating that the move would allow it to expand its presence in the Dallas area.

On June 30, FUJIFILM announced it is investing $1.6 billion into the cell culture manufacturing services of its subsidiary FUJIFILM Diosynth Biotechnologies, allowing it to expand its Texas-based facility. The company stated this will allow it to develop an “end-to-end cell culture process” that will result in new antibody therapeutics.

BridgeBio has frequented recent headlines, with several of its drugs in clinical trials producing positive results. Part of this success is due to its partnerships with the University of Texas MD Anderson Cancer Center which bolsters its pipeline. In January, BridgeBio leveraged BBP-398, its SHP2 inhibitor developed with the center, to ink a deal with Amgen. In 2021, BridgeBio announced a clinical collaboration with Bristol Myers Squibb to study the same candidate with BMS’s checkpoint inhibitor Opdivo (nivolumab) in advanced solid tumors with KRAS mutations.

Cassava Sciences is a clinical-stage biotechnology company focused on Alzheimer’s disease. It has offices in both San Francisco and Austin, the second-fastest-growing city in Texas. Its main candidate targeting Alzheimer’s disease is Simufilam, and on Wednesday, the company announced it expects to begin an open-label extension study in the second half of this year. Over 400 patients are currently enrolled in its ongoing Phase III trial of simufilam.