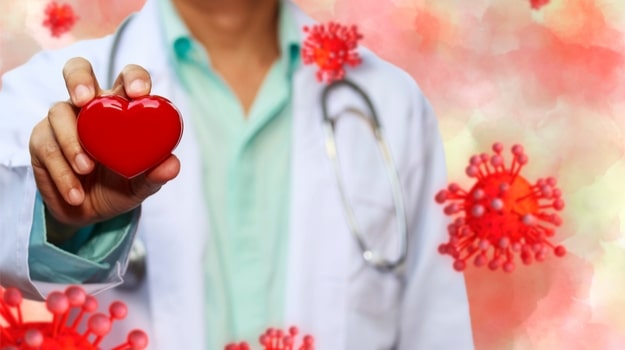 COVID-19 is a cardiac condition as much as it is a pulmonary or respiratory disease. This knowledge is so recent that it often is overlooked by non-cardiologists, according to physicians speaking at Demy-Colton Virtual Salon, “COVID-19: Surprising Cardiac Findings & Concern about the Potential Impact.”

What makes this news worse is that the heart is adversely affected in 20% of people who have even extremely mild symptoms. That data, published in JAMA last July, woke up the cardiac world, but rarely made it to other physicians.

“The other four common coronaviruses, including SARS and MERS, never had the extent of heart involvement we’re seeing in COVID-19,” said Eric Topol, M.D., founder and director of the Scripps Research Translational Institute. In those conditions, heart involvement was minimal, and different from the serious manifestations we’re seeing in COVID-19. “The only debate is how common this is and how it contributes to long-term cardiovascular morbidity of mortality.”

That said, there lots of major unknowns. The advice to take it easy and not exercise, for instance, is drawn from other carditides (heart inflammations).

At the in vitro level, four major studies of induced pluripotent stem cells (iPSCs) each showed that when the SARS-CoV-2 virus was put in a Petri dish with cardiac cells – either white cells or fibroblasts – the virus penetrated the cells. The cells stopped beating within a couple of hours.

Those studies, which can’t be performed in people, showed two key things: there was an inflammatory immune reaction in all parts of the heart, and the blood vessels became inflamed (endothelialitis).

That was concerning. The JAMA study was more so.

It looked at 100 patients who had recovered from COVID-19.

“The surprise was that 78 had some kind of cardio damage,” said co-author Eike Nagel, M.D., Ph.D., professor and director, Institute for Experimental and Translational Cardiovascular Imaging, University Hospital, Frankfurt Am Main. To determine whether the damage was caused by COVID-19, he and colleagues matched them with people with the same number and type of risk factors. “The number of COVID-19 patients with heart damage was much, much higher than in the control group, so we deduced that COVID-19 was harming the heart muscle.

“With MRI scans, we can see diffused damage and we can see scarring,” he continued. “Diffused damage means something’s going on in the whole of the heart muscle. We saw a five-standard-deviation increase in the amount of water in the heart in 22% of the patients. That’s not found among average people with similar risk factors. That’s a significant change.”

In 20% of the patients, Nagel found scarring, indicating irreversible damage to the heart muscle. Even young, healthy, asymptomatic athletes are showing heart damage that was detected by scans months later.

What is also notable is that only 33 of the 100 patients had been hospitalized for COVID-19. The remaining 67 patients had relatively mild symptoms. Many underwent diagnostic testing because someone close to them had the virus, but were asymptomatic themselves or had very mild systems. For example, Nagel said, “Most would say they had a day or two when they felt ‘off,’ yet we found a large amount of cardiac damage.”

Bob S. Hu, M.D., director, cardiac MRI, Sutter Health, cited multiple studies from around the world of recovered COVID-19 patients in which scans revealed elevated levels of troponin, indicating cardiac damage. Fatigue, shortness of breath and chest pain were frequent symptoms. For example, a 143-patient study from Rome, published in JAMA, indicated that 60 days after the onset of symptoms, only 12% of patients were symptom free. More than 50% reported fatigue, 43% had shortness of breath, 27% reported joint pain and 22% still experienced chest pain.

“What we’re seeing is not the direct result of the virus,” Nagel said. Cardiac damage becomes evident later, sometimes several months later, and appears to be caused by an autoimmune response to the virus.

What this means for society is, as of yet, unknown. Based upon other patient groups with similar types and levels of heart damage, there is a significant increase in the number who develop serious conditions such as arrhythmia, heart failure and premature death.

“This is relevant, then, not on an individual basis, but on a population level. It will influence how cardiac health will develop in the next 10 to 20 years,” Nagel said.

“This research, conducted worldwide, shows this type of problem will have long-term consequences,” Hu said. “We need to find those with heart involvement for more directed evaluation, to determine where we can intervene and make the problem more manageable.”

“MRI is time-consuming. A standard MRI can take one hour,” he pointed out. “It also requires a lot of training to acquire the appropriate data, and expertise analyzing it and drawing conclusions. It’s limited by the availability of trained personnel.”

Hu uses AI as to eliminate variability among human operators and to simplify the workflow among people. His goal is to make trained AI cardiac data interpretation methods available to every healthcare facility with an MRI machine, and thus present better data to physicians who care for patients.

To apply this data to public health, “a lot more research is needed, ideally with MRI or echocardiograms,” Topol said. “We need large studies. It’s possible it could be less concerning than it looks now.”