“We are encouraged by the data from this study and will continue to explore the potential of RECCE® 327 to treat hospital-acquired infections,” said Recce Pharmaceuticals CEO James Graham. “Antimicrobial resistance is one of the most urgent threats to global public health with the suite of ESKAPE pathogens posing a significant threat due to their virulence and rapid development of drug-resistance. Additionally, with R327 effective against two more priority pathogens listed by the WHO, we believe this reinforces the potential of R327 to treat some of the greatest threats to human health.”

These antibiotic resistant bacteria acronymically dubbed 'ESKAPE' due to their propensity of 'escaping' the biocidal action of antibiotics, are collectively responsible for over 720,000 hospital acquired (nosocomial) infections in the United States alone each year.1 The ESKAPE pathogens include both Gram-positive and Gram-negative bacteria; Enterococcus faecium, Staphylococcus aureus, Klebsiella pneumoniae, Acinetobacter baumannii, Pseudomonas aeruginosa, and Enterobacter species.

The study was conducted by an independent contract research organization to assess the in-vitro efficacy of R327 against all ESKAPE pathogen bacterial strains. R327 is a broad-spectrum synthetic anti-infective that has potential to address the urgent global health threat posed by antibiotic resistant superbugs and emerging viral pathogens.

Graphics accompanying this announcement are available at
https://www.globenewswire.com/NewsRoom/AttachmentNg/a3b15bb1-79c7-44fd-b457-734d4e2fa7d0

ESKAPE pathogens are responsible for 42.2% of blood infections,2 around 50 million infections each year, resulting in one in five deaths in the community or one in three deaths in hospitals3 and are associated with higher lengths of stay, cost of care, and mortality compared with non-ESKAPE pathogens.2

The dilution method of R327 used in these studies slightly increased the minimum inhibitory concentration (MIC) across the wide range of Gram-positive, Gram-negative and superbug forms of bacteria. The slight variation (+/-) between one experiment to the next is likely due to small variance in the sensitivity of the instruments used in detection. The dilution of R327 that showed efficacy against K. pneumonia (CRE) is higher than previous findings though still well within the therapeutic window dosing range.

Additionally, R327 was shown to be effective against the WHO global priority pathogens carbapenem-resistant Escherichia coli (E. coli CRE) and multi-drug resistant Neisseria gonorrhoeae4 (N. gonorrhea MDR). These bacteria are listed on the WHO’s list of priority pathogens as those for which new antibiotics are urgently needed in addition to ESKAPE pathogens.

A graphic accompanying this announcement is available at
https://www.globenewswire.com/NewsRoom/AttachmentNg/08edf798-57a0-4634-8bb3-593db59a0b48

Time-kill curves of R327 at various concentrations against strains of ESKAPE pathogens. In the time kill assay, each R327 dilution was tested in duplicate with the average plot shown.

The bactericidal activity of R327 demonstrated a three-log or 99.9% reduction in the number of colony forming units (CFUs) over 24 hours against all six strains at various concentrations and times.

Additional time kill concentration studies are underway with drug-resistant bacterial and are expected to be in-line with existing MIC/Time Kill. Data is expected in around a month and as pivotal inclusion in a Whitepaper/Abstract for presentation at the World Microbe Forum (20-24 June 2021) 5.

Recce’s anti-infective pipeline is unique and comprised of broad-spectrum synthetic polymer antibiotics RECCE® 327, RECCE® 435, and RECCE® 529 for viral infections with unique mechanisms of action against hyper-mutation on bacteria and viruses, respectively.

Patented lead candidate RECCE® 327 has been developed for the treatment of blood infections and sepsis derived from E. coli and S. aureus bacteria – including their superbug forms. Recce’s new antibiotic compound, RECCE® 435, has been formulated for oral use.

The FDA has awarded RECCE® 327 Qualified Infectious Disease Product designation under the Generating Antibiotic Initiatives Now (GAIN) Act – labelling it for Fast Track Designation, plus 10 years of market exclusivity post approval. Further to this designation, RECCE® 327 has been included on The Pew Charitable Trusts Global New Antibiotics in Development Pipeline as the only synthetic polymer and sepsis drug candidate in development. 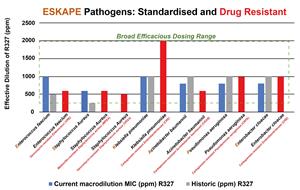 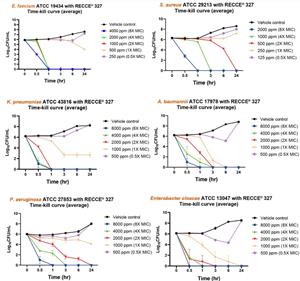 Time-kill curves of R327 at various concentrations against strains of ESKAPE pathogens.