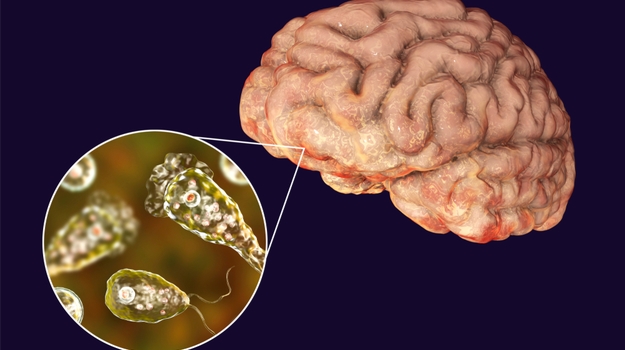 Although frightening, brain-eating amoeba infections in the U.S. are quite rare, with only about 146 cases reported in the U.S. since 1962. However, despite the rarity, it’s very deadly, killing about 97% of infected patients.

The infections are of Naegleria fowleri, which lives in warm bodies of fresh water. There, it usually eats bacteria found in the mud. Most infections of people in the U.S. occur in southern states in the summer, especially Texas and Florida. The sediment is disrupted and amoeba get mixed into the water, which the swimmers inhale through their nose. From there, the amoeba affects the olfactory nerves and migrates to the brain, where it causes primary amoebic meningoencephalitis. Another deadly amoeba of this type is Balamuthia mandrillaris.

No one drug is particularly effective in treating it. Researchers, however, recently published research in the journal ACS Chemical Neuroscience describing some new compounds that show promise as treatment.

Led by Ruqaiyyah Siddiqui of Sunway University in Malaysia, they studied quinazolinones, which have a wide spectrum of activity against bacteria, viruses, fungi, parasites and cancer. But they have never been tested against brain-eating amoebae.

They synthesized 34 new quinazolinone derivatives and evaluated how they effected N. fowleri and B. mandrillaris. They found some were very effective at killing the amoeba in Petri dishes. Sometimes, by adding silver nanoparticles, the compounds were even more effective.

They found that the most effective quinazolinones contained chlorine, methyl or methoxy groups, with relatively low toxicity in human cells.

One of the reasons the infections are so deadly isn’t just that it’s difficult to get drugs across the blood-brain barrier, but the infection stimulates the body’s immune system, which causes inflammation and brain swelling. The increase in cranial pressure damages the brain’s connection to the spinal cord, which disrupts communication with other parts of the body, such as the respiratory system.

Although symptoms can appear as early as two days, or as long as two weeks after inhaling the amoebae, the first symptoms are generic—headache, fever, nausea and vomiting, as well as change in the sense of smell or taste. But from there it quickly progresses through the central nervous system, causing a stiff neck, confusion, fatigue, balance problems, seizures and hallucinations. Death often occurs within five to seven days after the onset of symptoms.

The amoebae cause fast and irreversible destruction of important brain tissue. The symptoms are often mistaken for less dangerous diseases. And there is no quick diagnostic assay for N. fowleri, so patients are often mistreated for viral or bacterial meningitis.

Millions of people are exposed to these amoebae and don’t get ill. It’s still unknown why it is more likely to affect some people than others.

Despite the relative rarity, it was only in September 2019 that a 10-year-old girl in Texas died from a N. fowleri infection only eight days after having a headache and fever. The physicians thought it was a virus, but when she grew confused and unresponsive, was taken to an emergency room, then flown to Cook Children’s Medical Center in Fort Worth. A spinal tap determined she had been infected by the amoeba.