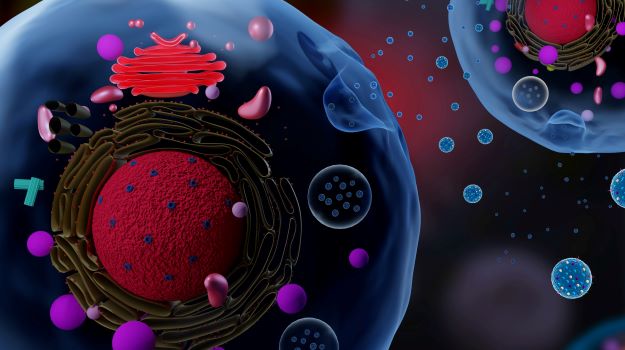 New therapeutic modalities always face an uphill climb, but the urgency of COVID-19 may have opened the door for two related ones: cell therapies and exosomes.

The pandemic has been an all-hands-on-deck call for the biotech industry, with new approaches quickly reaching patients through compassionate use cases and emergency use regulatory authorizations.

“As we saw the wave coming, everyone started putting all of the arsenal towards treatment,” said Dalip Sethi, director of scientific affairs at Terumo Blood and Cell Technologies.

Opportunities also arose for younger spaces like cell therapies, notably for mesenchymal stem cells (MSCs), multipotent cells found in many human tissues – as well as the extracellular vesicles (EVs) they produce. Neither are approved as therapies for any indication, but academics and companies theorized they could be useful in severe cases of COVID-19 where severe lung inflammation occurs.

“We knew MSCs can suppress the immune system given their properties. They were a first line of attack, along with exosomes,” Sethi said.

Cell therapies are hot. With the approval of Breyanzi from Juno Therapeutics and Celgene, there are now five marketed CAR-T therapies. The regulatory support and exciting technologies have inspired investors, who have backed at least nine cell therapy companies that went public this year, most recently with Celularity’s SPAC merger in July.

“There’s a big trend moving towards allogeneic,” Sethi said, although off-the-shelf versions are still years away. Unmodified cell products like umbilical cord blood-derived stem cells have fewer manufacturing steps than engineered ones, but are largely unapproved outside of niche hematopoietic diseases.

Some in the industry have pinned their hopes to exosomes, which are produced naturally by all eukaryotic cells as a method intercellular communication. EVs have the natural ability to transmit genetic information into other cells, can target specific tissue, don’t cause an immune response and in some cases have innate regenerative or therapeutic effects.

In fact, for MSCs, EVs like exosomes are credited as the primary mediators of therapeutic properties. Academics have also shown that engineered chimeric antigen receptor (CAR)-T cells release EVs that carry the tumor-targeting CARs and inhibit tumor growth, while circumventing the immunosuppression and toxicity issues that dog CAR-Ts themselves. Others have shown EVs derived from natural killer (NK) cells and dendritic cells have at least some of their parent cells’ therapeutic abilities.

Companies have taken notice of the EV possibilities, particularly as EVs can be engineered to deliver therapeutic cargo to other cells. Leading engineered exosome company Codiak BioSciences, for one, launched an IPO, an R&D deal with nucleic acid therapy company Sarepta Therapeutics, and its first two clinical trials, all in the span of five months last year.

A few biotechs have feet in both worlds, like cell and exosome company Capricor Therapeutics. The company has tech transferred the manufacturing to contract development and manufacturing organization Lonza as it plans a pivotal Phase III trial for the company’s lead off-she-shelf CAP-1002 cardiosphere-derived cells for patients with Duchenne muscular dystrophy.

Still, outside of CAP-1002, Capricor’s disclosed future pipeline is entirely in exosomes, be they derived directly from its CDCs or fibroblast cells, or as engineered vehicles to deliver RNAs.

“Cells are expensive to make, expensive to qualify, and expensive to turn into products,” said Capricor President and CEO Linda Marbán. “Our concept is that they’re great for rare diseases, someplace where it’s actually worth putting forth that expense. But if you really want to develop a product that delivers the benefits of regenerative medicines, such as a cell therapy, and drive your costs down, the best way to do that is to build up the exosomes.”

Since EVs are derived from cells, the progress to date in cell therapy manufacturing is also foundational for EV manufacturing. The number of EVs will be orders of magnitude bigger than the numbers of cells they are derived from, but EVs from a single cell can vary widely in size, content and function. Although the interest in exosomes is high, the challenges of isolation and purification remain. Companies are motivated to move away from cells, said Jim Beltzer, senior manager for global strategic medical affairs at Terumo. “I think where we’re lagging behind is in how we make sure what we’ve got is what we’re interested in,” he added.

“As if it weren’t bad enough in cell therapies that we’ve got these long expansion protocols for, say, T cells,” Beltzer said.

Codiak has since developed a continuous manufacturing approach that may speed the processing step, and other exosome companies are similarly developing new approaches. Beltzer said automation is key for accelerating both cell therapy and EV manufacturing time, but what the industry needs is a standardized GMP process.

“It’s really important for exosomes," Beltzer said. "The process is the product.”

MSCs generated a lot of excitement late last year, when Novartis announced it was licensing Remestemcel-L from regenerative medicine company Mesoblast. The bone marrow-derived MSC therapy was then in phase III testing for patients with severe COVID-19-related acute respiratory distress syndrome (ARDS). The enthusiasm dissipated almost immediately, as data from the trial released a month later showed that Remestemcel-L could not meet its primary endpoint of a 43% reduction in mortality–a high bar set early in the pandemic when therapeutic options were more limited and when overall mortality was higher.

At least two dozen cell therapies have been tested in humans by companies and academics to treat COVID-19, largely to treat ARDS, a hyperinflammatory condition that can also be caused by other infections or by lung injury. Capricor is one of them, enrolling patients in a Phase II trial for its CAP-1002, following encouraging signs in five patients received the cells under a compassionate use protocol last year.

Ismail Hadisoebroto Dilogo, a professor of medicine at the University of Indonesia, said MSCs were a logical avenue to explore when the pandemic hit because they have anti-inflammatory and immunomodulatory properties.

Dilogo and his team published results in June in Stem Cells Translational Medicine from a Phase I study of umbilical cord MSCs in 40 patients with critical COVID-19. “Surprisingly, we saw patients in the MSC group has 2.5 times improved survival.”

EVs are a younger modality than cell therapies, with fewer players, but at least three companies launched clinical trials for MSC-derived products for patients with COVID-19. Some of the products have been marketed without needing U.S. Food and Drug Administration approval, under a regulatory grace period for human cell-based products that expired in May. Texas-based Direct Biologics has since announced FDA green lights to begin three Phase I/II trials for ExoFlo, its bone marrow MSC-derived exosomes. The company expects to launch all three this year in patients with mild-to-moderate COVID-19, post-acute COVID-19/chronic post-COVID-19 syndromes, and ARDS, respectively. Organicell Regenerative Medicine similarly announced forthcoming trials for patients with prolonged COVD-19 symptoms, plus trials for  knee osteoarthritis and chronic obstructive pulmonary disorder, for its Zofin perinatal fluid-derived EVs.

As researchers learned more about COVID-19 through the pandemic, vaccines and therapeutic strategies that focused on blocking transmission became more reliable approaches, Sethi said. “Cell therapies and exosomes can definitely help, but they can’t be a first or even second line of therapy.”

Interest in EV from more established cell therapy companies would be a clear signal the space is considering a shift, but none of the companies with approved cell therapies have publicly disclosed programs with exosomes or EVs. Still, the clinical progress of engineered exosome companies like Codiak, coupled with new INDs from the unmodified EV companies, are clear signs EVs are just getting started. “There will be a drive to get away from using whole cells and get to active components,” Beltzer said. “I think it’s happening in peoples’ minds.”