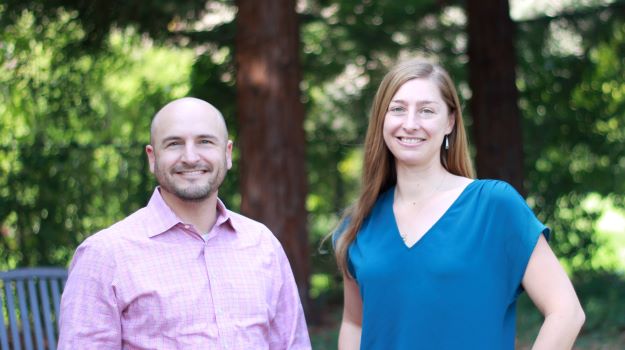 Have you ever encountered excitement so palpable it’s contagious? That’s the experience of talking with BigHat BioScience’s founders – CEO Mark DePristo and CSO Peyton Greenside. They are so passionate about the potential of BigHat’s antibody discovery and engineering platform, it’s nearly impossible not to share their enthusiasm.

BigHat is a Bay-area startup that’s reimagining antibody development with the help of AI and ML (machine learning) technologies through data-driven discovery. When DePristo and Greenside worked together at Verily, they saw an opportunity to maximize the impact of machine learning and biology, they knew the only way to make it happen was integration from the ground up.

Thus BigHat was launched with a structure that eradicates the barrier between academic hypotheses and measurable development. The pair combined AI/ML with a wet lab that can go from in silico antibody designs to real physical molecules in a matter of days.

Founded in September 2019, the initial $5 million seed funding was spent on building out the wet lab and AI technology. The company just announced they also completed a $19 million Series A last month.

“We’re really at the cusp. The A round is really to take the next series of steps from all the different applications that we see for our platform right now. That’s really what we came out of this seed round with, convinced that there was just a huge amount of opportunity to apply our platform,” DePristo told BioSpace.

DePristo expects to see major growth in the industry for AI/ML technologies in drug discovery and development. The wide range of applications for the company’s antibody platform has them focused on areas that can quickly create the greatest value for the most people.

BigHat’s technology gives precise control over the antibodies’ molecular properties, giving opportunities DePristo believes only they can uniquely pursue. The company already has a long list of potential applications lined up to knock down.

Shortly after launch, an opportunity to prove the platform’s potential presented itself.

“The pandemic came at quite an interesting time due to our founding,” Greenside said. “We thought it was a great opportunity to, as we built our platform, essentially evaluate our capabilities on a high value project.”

The high value project was, as you may have guessed, developing an antibody against SARS-CoV-2.

The BigHat team combined the SARS-CoV-1 molecule with a second molecule making it bispecific. This effort combined multiple aspects of the platform: optimizing affinity towards multiple targets, creating a multi-specific molecule and optimizing all the components. The case study proves the tech can precisely change the properties and potency of an antibody molecule.

The resulting molecule was “pretty interesting,” and according to DePristo, they’ve been trying to figure out what to do with it ever since. With therapeutics approved and vaccines now giving hope for the stop of coronavirus spread, he says they’re looking more towards future applications.

“We do think we have a very interesting approach to anti-infectives in general. We’re very interested in advancing our anti-infectives program further along. That’s something we’re very actively pursuing,” DePristo said. “What’s really transformative for us is the process by which we created this molecule is hugely interesting to understand. The reason for it is we controlled the design goals. We turned the SARS-CoV-1 molecule into the 2. It really illustrates the value of our platform.”

BigHat’s platform can speed a molecule from design to fully measurable molecules in a matter of days, molecules ready to test in the real world. It’s then coupled with AI/ML technology that learn from the output of the platform and can propose new designs for the next cycle to make improvements.

Traditional approaches to this type of development are what Greenside called “really bulk screening technologies” that take weeks to months to complete. Antibodies are pulled from an infected person to be replicated, but the strain in that case is very specific and likely ineffective against a mutated strain.

What gives BigHat its edge is the ability to make that molecule work against a variety of mutations. The platform gives precise control over the molecular properties of the antibodies. The shorter cycle times allows the team to have a more complex trajectory to quickly test hypotheses for improving a molecule. BigHat’s coupling of machine learning with lab tech gets its team from predictions to verification in the shortest possible order.

DePristo’s hope is to get into the therapeutic space where the problems are too complex for traditional “pull an antibody out of the blood” approach. BigHat’s platform could create molecules that are capability-driven rather than target-driven, very stable and aggregation-resistant. Such a molecule could step away from the cumbersome IV administration to perhaps a breathable one formulated like an asthma inhaler.

“It’s really incredibly cool technology! We’re very excited by all the things it can do. Our biggest challenge at BigHat is how do we service all of the opportunity in front of us? Through partnerships and through internal programs. We need to scale up our platform. We want to be 10-100 times bigger technically in the next few years because there’s so many things we’d like to do with the platform.”

When asked how he’s kept the team moving forward amidst a pandemic and working from home himself, DePristo said, “First, it helps that the technologies that BigHat is working on and the application, to SARS-CoV-2 in particular, is just hugely compelling. So much of what we’re doing is novel. Part of it is not getting in the way of the intrinsic excitement of all the people we’re hiring. It’s just very good like that.”

DePristo said “big goal” for BigHat, “First we’d like to see the actual first molecules that have touched BigHat’s platform be in people and really making a difference. That would be unbelievable. But I think the bigger thing is this paradigm shift in how people think about things. I think we would be the most excited to not only say our molecules are in people and helping them, but that we’ve brought a level of precision molecular engineering to protein therapies that people have always wanted but not been able to get. The novel advances in synthetic biology and machine learning have converged at BigHat to let us deliver on that opportunity.”