AACC Buzz: Noninvasive Blood or Saliva Tests for Cancer and COVID-19 Are Promising 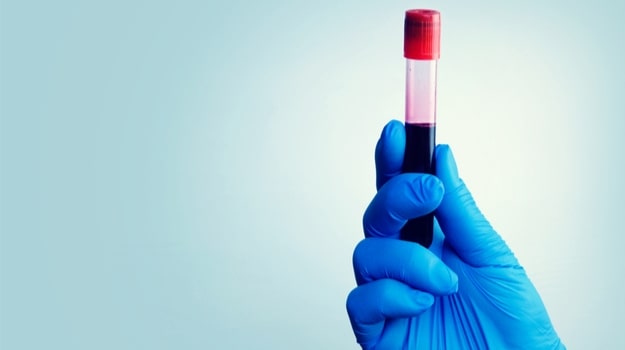 Noninvasive tests for colorectal cancer, prostate cancer and COVID-19 were among the highlights of the American Association for Clinical Chemistry (AACC) meeting September 26-30.

One of the most exciting of the tests may be a blood test to diagnose colorectal cancer (CRC), simply because it could compete with colonoscopies. Researchers from the Medical Research Institute, Alexandria, Egypt, described a multiplexed panel of serum biomarkers to profile inflammatory mediators that have carcinogenic roles.

“Also, there was a statistically significant increase in serum level of G-CSF and VEGF-A among CRC patients compared to those with precancerous colon polyp,” the authors wrote in the e-poster.

The study involved 87 colonoscopy patients, 35 of which had CRC and 52 were non-malignant. Those without malignancies were segmented into those with colon polyps (9), inflamed mucosa (24) and normal mucosa (19.)

Lead author Mona Eldeeb and colleagues devised the diagnostic panel to overcome the challenges posed by the poor performance of other non-invasive tests for colorectal cancer and the patient non-compliance associated with invasive tests.

Based on these results, they said this assay panel was more discriminating than stool occult blood tests and, therefore, could reduce false positive rates and unneeded colonoscopies. Consequently, they suggested it could be a promising screening and diagnostic tool for CRC.

On Wednesday, another team presented a non-invasive diagnostic panel to diagnosis prostate cancer early and to distinguish it from benign prostatic hyperplasia. It uses miRNAs and saliva.

As Jamal Amri and Mona Alaee of Tehran University of Medical Sciences explained in an e-poster, this panel could be a solution to the current problem of distinguishing between malignant prostate cancer and benign prostatic hyperplasia in healthy men.

Prostate-specific antigen levels and biopsies “are not sufficient for an accurate, early diagnosis, and (are) associated with the suffering of patients,” they pointed out. “The advantage of our study is the use of several microRNAs, which have been reported to be detectable in the blood much earlier than the progression of cancer, which makes for a better diagnosis, as well as the use of saliva as a noninvasive biological sample that causes little pain to patients,” Amri said in a statement.

When saliva tests are used to detect or manage COVID-19, however, their results are mixed when compared to nasal swabs, several researchers reported in their poster presentations.

For example, a team from Luxor Scientific, led by L. Contella, tested 308 samples and found that 29 samples were positive and 5 were inconclusive for the presence of the SARS-CoV-2 virus. Then they compared results from analyzing saliva samples and nasal swab samples.

They found that the saliva test detected 85% of known COVID-19 cases versus the 94% identified by nasal swab, but that saliva detected two individuals that nasal swabs failed to identify. That bumped the saliva test’s success rate to 97.7%.  Thus, they concluded that saliva tests could alleviate bottlenecks when supplies are scarce, and also could eliminate the need for direct patient contact for healthcare workers.

Silva and Zauli compared 101 nasal swabs on which performed RT-qPCR had been performed with results obtained by saliva samples from the same patients. Targets were the ORF1ab, N, and S genes. Results showed the sensitivity for the saliva samples was 90% and specificity of 100%, when compared to results from the nasal swab samples. Low viral load affected sensitivity, but “the test obtained an optimal efficiency of reaction,” they reported, that could make this saliva test an important option for COVID-19 diagnostic testing.

For clinical management of COVID-19, however, saliva-based tests may be less useful, according to another research team from Grupo Pardini. Led by Fernando. K. Marques, it compared the results of paired saliva and nasopharyngeal swabs specimens that were collected from 29 COVID-19 patients on the same day.

“Using nasopharyngeal swab RT-qPCR as the reference standard, the sensitivity and specificity of (the) Covid Ag Oral Detect Kit were 66.7% and 100%, respectively,” the team reported. Consequently, they conceded, “The usefulness of saliva specimens for diagnosing COVID-19 remains controversial because the reported diagnostic sensitivity varies widely between studies.”

Although saliva may be an alternative specimen for COVID-19 diagnosis, the low sensitivity of the test would require increasing the sample size to enable more accurate evaluations.