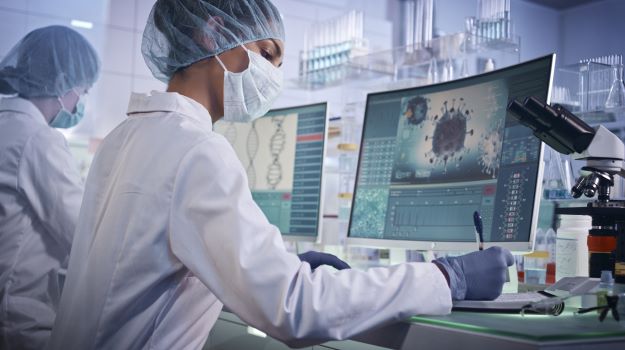 One of the key questions with the vaccines and in COVID-19 infections is how long immunity will last. Much of this will depend on immune memory. A new study from the National Institute of Allergy and Infectious Diseases (NIAID), part of the National Institutes of Health (NIH), conducted in monkeys, found that T-cells aren’t critical for the primates to recover from acute COVID-19 infections. T-cell depletion didn’t induce severe diseases and the T-cells didn’t make up the natural resistance to severe COVID-19 in rhesus macaques. And even in the macaques who were strongly T-cell-depleted developed memory responses to a second infection. They published their research in mBio.

“We started this study early in the pandemic, trying to figure out how to make a good model to study the disease in humans using animals,” said Kim Hasenkrug, senior investigator in the Laboratory of Persistent Viral Diseases, Rocky Mountain Laboratories, NIAID, NIH, in Hamilton, Montana. “The monkeys turned out to be more resistant to the disease than we expected, so we wanted to try to figure out why that was and try to gain some insights into the disease in humans as well. We now know that the antibody response is the most critical response for protection by vaccination, not the T-cell response.”

In short, they found that the monkeys had a good memory response against SARS-CoV-2 even if their T-cells were depleted. They found very strong virus-neutralizing antibodies, which was unexpected. They feel this is probably a good thing because people who can’t mount sufficient T-cell responses will still have a chance to recover because of the antibody responses.

Scientists at Mount Sinai School of Medicine recreated much of the damage observed in frontotemporal dementia in specially grown cerebral organoids in Petri dishes. The specific type of dementia is caused by a genetic mutation in tau, a protein associated with Alzheimer’s disease and other dementias. They were able to identify how the mutated tau protein might trigger deaths in a specific class of neurons associated with frontotemporal dementia. They also demonstrated that they could prevent the death of the neurons by using an experimental drug originally designed for Crohn’s disease, an inflammatory bowel disorder. Frontotemporal dementia is a rare type of dementia that usually starts between the ages of 40 and 60. It results in behavior changes and difficulty with speaking and thinking. The researchers created induced pluripotent stem cells from skin or blood cells, then created thousands of very small, 3D cerebral organoids capable of mimicking the early growth and development of the cerebral cortex.

A study from Massachusetts General Hospital found that people who had an allergic reaction to their first mRNA COVID-19 vaccine dose — meaning the Moderna or Pfizer-BioNTech vaccines — went on to get a second shot without complications. In other words, having a reaction to the first dose shouldn’t prevent you from getting the second. The investigation combined data from MGH, Vanderbilt University Medical Center, University of Texas Southwestern Medical Center and Yale School of Medicine. The allergic reactions included itching, hives, or flushing. Of the 189 patients, 32 experienced anaphylaxis after the first dose, and a total of 159 went on to receive a second dose. All 159, including 19 who had allergic reactions to the first, tolerated the second. Of the 32 patients who reported “immediate and potentially allergic symptoms” after the second dose, they were either self-limiting, mild, or resolved with antihistamines.

For a long time, so-called “junk DNA” was thought to play no role in inheritance or metabolism. Increasingly, this non-coding DNA is found to play a significant role in gene regulation. Researchers at Washington State University recently identified a DNA region called VNTR2-1 that seems to drive telomerase gene activity. In addition, it appears to prevent aging in some types of cells. Telomeres are the ends of chromosomes, and their length is associated with aging — that is to say, as the older you get, the shorter they get because every time cells divide the telomeres get a tiny bit shorter. When they get too short, cells no longer reproduce. But in some reproductive cells and cancer cells, telomerase gene activity resets telomeres to the same length when DNA was originally copied, creating a kind of “immortality” for those cells.

Bioengineers from Rice University are developing a possible implanted device for type 1 diabetes that can generate insulin. The project uses insulin-producing beta cells created from human stem cells in order to engineer an implant that can sense and regulate blood glucose levels by producing the appropriate amount of insulin at a specific time. “We’re using a combination of pre-vascularization through advanced 3D bioprinting and host-mediated vascular remodeling to give each implant several shots at host integration,” said Jordan Miller, who is working with fellow researcher Omid Veiseh. The cells will be protected with a hydrogel formulation that Veiseh developed. The hydrogel material can encapsulate cells in bead-sized spheres but has pores that are small enough to keep the encapsulated cells from being attacked by the immune system, but big enough to allow in nutrients and insulin.

Investigators at Georgetown Lombardi Comprehensive Cancer Center found that DNA tags, which are modifications to cell-free DNA (cfDNA), might be used to better evaluate and potentially modulate treatment for cancer and other diseases. When cells die, cfDNA is shed from tissue and can be isolated in the blood. It should be possible to create a map of cell death across both in normal and cancer cells without an invasive biopsy. They published their research in the journal Frontiers in Genetics.

“Taking tumor tissue biopsies is a hit or miss process and is usually not a good representation of the whole tumor or its spread,” said Anton Wellstein, professor of oncology and pharmacology at Georgetown and corresponding author of this study. “Using blood, or liquid biopsies, on the other hand, provides a homogeneous representation of cfDNA that is being shed from all types of cells.”