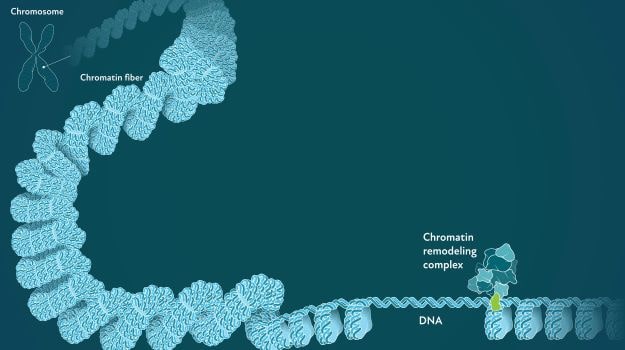 Chromatin is the 3-dimensional structure of DNA, which is tightly packed inside each cell.

Next generation epigenetic drugs are expanding the repertoire of targets as companies examine new ways to approach therapeutics for cancer and a wide range of illnesses. Of those, chromatin remodeling complexes are among the most novel, and Foghorn Therapeutics pioneered this space with a therapeutic approach that tackles the structure of chromatin itself.

BioSpace caught up with Foghorn Therapeutics’ Steven Bellon, Ph.D., SVP, drug discovery, shortly before he chaired a panel on new epigenetic developments at the American Association for Cancer Research (AACR) Annual Meeting 2021. Foghorn, he said, is focused on the structure of chromatin itself rather than the more common covalent approaches.

Gail Dutton (GD): What is chromatin and why does it matter in drug development?

Steven Bellon (SB): Chromatin is the compacted form of DNA. It’s wrapped around nucleosomes and compacted to fit inside the nucleus of the cell. When compacted, it can’t be read by the transcriptional machinery, so genes won’t express. For gene expression, the chromatin must be unraveled. That process is called chromatin remodeling, and it represents an entirely new niche.

This approach is directed specifically at these chromatin complexes. They are the master regulators of gene expression, controlling the opening and closing of chromatin. Opening or closing determines whether the genes can be expressed.

GD: How has the understanding of chromatin changed these past few years?

SB: Scientific founder Cigall Kadoch, Ph.D., assistant professor, Dana-Farber & Broad Institute studied the genome of cancer patients and found a disproportionate number of mutations in the genes that encoded the chromatin regulatory system and developed a way to interrogate them.

The genes in the chromatin system used to be considered housekeeping genes, and nobody cared about them, but Cigall made the first realization that because of the central role they play in controlling gene expression, diseases hijack those genes for their own ends.

GD: How do transcription factors come into play in the chromatin regulatory system?

GD: Tell me about your approach. How do Foghorn’s chromatin-based therapeutics work?

SB: One approach shuts down the catalytic activity of the machine… thereby shutting down aberrant transcription factors. We have drugs heading to the clinic now that we believe do that.

For example, as we said in one of our AACR presentations, we have discovered and developed a novel series of compounds that potently and selectively inhibit the ATPase components of the BAF complex, SMARCA4 and SMARCA2 (also called BRG1 and BRM, respectively). Inhibiting the BAF complex resulted in lineage-specific changes in chromatin accessibility in cancer cell lines. Uveal melanoma was especially sensitive to these changes.

GD: Foghorn Therapeutics is a relatively young company, founded within the past decade. What’s in your pipeline?

SB: Foghorn has a broad pipeline of programs targeting the chromatin regulatory system. The most advanced is FHD-286, which is heading towards the clinic. This enzymatic inhibitor is designed to treat uveal melanoma by targeting the GNAQ/GNA11 mutation, and acute myeloid leukemia by targeting elevated BRG1 expression. Phase I data may come as early as the end of this year.

Our second lead program, FHD-609, is being developed as an intravenous, small molecule protein degrader of BRD9 to treat synovial sarcoma. We are on track to submit an investigational new drug (IND) application this quarter.

Our selective ARID1B program is also particularly interesting. A protein degrader, it targets the ARID1A mutation found in certain cancers that affects more than 175,000 people.

GD: You’ve also partnered with Merck, nearly a year ago. What can you tell us?

SD: Merck has interest in a transcription factor, and its scientists were attracted to our approach. It’s an exciting collaboration with a great partner..

GD: Taking a 50,000-foot view, what does chromatin regulation mean for the industry?

SB: In terms of the big picture, the chromatin regulatory system represents a whole new class of targets. They are multi-protein targets, though, in which an enzyme is surrounded by 10 to 12 other proteins. That makes them particularly challenging.

Because Foghorn was the first to realize the role chromatin plays in transcription, we have a head start.

Chromatin remodeling is a wide-open space. It’s exciting. There are so many targets both in and beyond oncology. There is lots of data in the literature that implicates these remodeling complexes in neurological disease, inflammation, and other things, as well. There is tremendous opportunity.