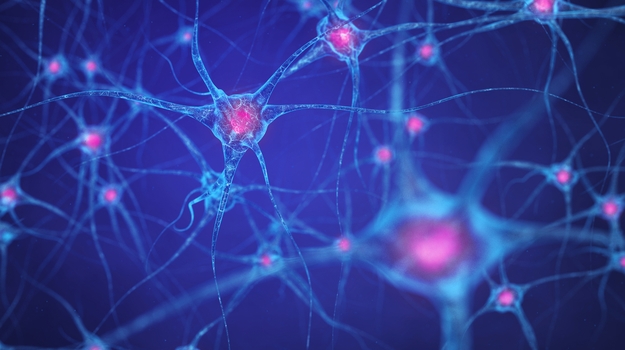 Huntington’s disease (HD) is a deadly genetic disorder that causes the progressive breakdown of nerve cells in the brain. There are about 30,000 symptomatic people in the U.S. and another 200,000 who are at-risk of inheriting the disease. Symptoms usually appear between the ages of 30 and 50 and worsen over a 10 to 25-year span. Death is often the result of pneumonia, heart failure or other complications.

New research by researchers at the University of California, Los Angeles (UCLA) into the role of astrocytes, star-shaped brain cells, in the disease, may lead to new treatment strategies. The astrocytes interact and support neurons and other brain cells. The researchers, led by Baljit Khakh, professor of physiology and neurobiology at the David Geffen School of Medicine at UCLA, found that Huntington’s damages astrocytes at the early stages of the disease.

“It’s likely that we will not understand brain diseases without also understanding what happens to the cells that actually form the brain, including astrocytes,” Khakh told Medical Xpress.

Khakh and his research team studied the progression of HD in postmortem human brain tissue and in living mice that carried the gene mutation. By suppressing the mutation in astrocytes, they could halt disease progression in mice and actually repair some of the damage caused by the disease.

“We believe that if we are able to stop the progression of the disease in astrocytes and neurons, then we may be able to restore activity in the brain to what it was before the disease developed,” Khan told Medical Xpress.

The researchers also created a database that can be used for new astrocyte studies. The research was published in the journal Science Translational Medicine.

HD is caused by a dominant mutation in the HTT gene. This results in production of a mutant huntingtin protein (mHTT). When they deleted the mHTT gene in astrocytes, disease progression slowed. A core signature of 62 genes whose expression was changed by mHTT expression in mice and humans were identified, which were linked to basic astrocytic functions.

Although the huntingtin (HTT) protein is found throughout the body, HD primarily affects the central nervous system, particularly the striatum and cortico-striatal-thalamic circuitry.

The researchers note that there is “broad interest in exploiting astrocytes to modulate the mechanisms that drive neurodegeneration.”

Study author Blanca Diaz-Castro, a former UCLA postdoctoral scholar, told Medical Xpress this was the first study to identify how the mutation affects astrocytes. “We believe the findings will lead to further studies on astrocytes in brain diseases.”

Although it’s not well understood what the huntingtin protein actually does, the expanded polyglutamine sequence is toxic to brain cells. This research furthers our understanding of how and why it is toxic and which brain cells are being affected.