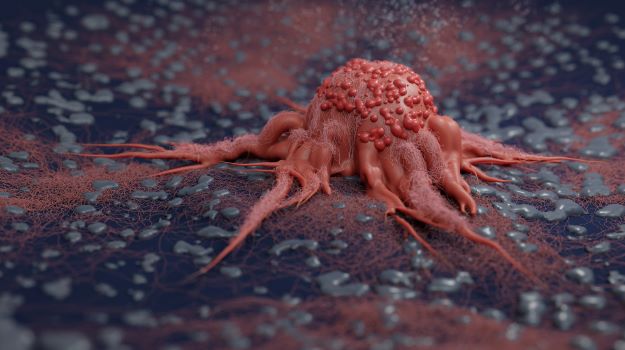 Nanobiotix is developing a way for its locally-injected radioenhancer for solid tumors to treat metastasized cancers, in combination with checkpoint inhibitors, and also deliver results distally. The news was announced at the American Society for Clinical Oncology (ASCO) Annual Meeting June 4-8.

As Nanobiotix CEO and co-founder Laurent Levy, Ph.D. told BioSpace, the therapy, NBTXR3, is injected into local solid tumors once, and then activated by radiotherapy. By absorbing energy from radiotherapy, it amplifies the dose of radiation within the tumor cells without increasing the dose in surrounding healthy tissue.

NBTXR3 is composed of hafnium oxide nanoparticles that, once injected, float inside tumor cells and aggregate into highly dense, inert clusters. When radiation is administered, these nanoparticles absorb energy, generating photons and secondary electrons. The hot spot created by these clusters inside the tumors punches holes in the tumor’s subcellular structure that cause the cells to die. When the radiation is not active, the nanoparticles become inert.

That’s step one. It is being evaluated for head and neck, lung, esophageal and other tumors than can be treated with radiation. In the Nanobiotix Phase I extension trial in head and neck cancer, recently released ASCO data suggested durable signs of efficacy at the 8.1-month follow-up, with an overall objective response rate of 82.5% and a complete response rate of 62.5%.

Step two is a systemic approach that can help destroy the local tumor as well as metastatic tumors.

“Working with clinical investigators, we are evaluating the potential of this therapy to kill tumor cells and then trigger an immune response against the tumor,” Levy said. “We believe the way NBTXR3 destroys these cells actually primes the immune system to recognize tumors so it can fight the injected tumor as well as distant metastases.”

“Immuno-oncology (IO) has been revolutionary for patients, but only a small number can benefit. That’s why there are so many IO approaches. For anti-PD-1 inhibitors to work, you need an immune response,” he elaborated. To get that immune response, priming the immune system is important, and that is where our physics-based approach could intervene.”

As researchers also noted in NBTXR3 preclinical data presented at ASCO, treatment with NBTXR3 and radiation “increased CD8+ T cells and improved local and systemic control in mice and induced immune response that was not observed with radiotherapy alone” with PD1-resistant tumors. In humans, new ASCO data indicated clinically meaningful tumor regression in 10 of 13 patients, including 6 of the 8 whose tumors had previously showed resistance to checkpoint inhibitors.

As such, this therapy could have enormous potential to enhance the efficacy of immune checkpoint inhibitors as a first-line therapy, overcome resistance for refractory patients, and transform some cold tumors into hot tumors.

According to Levy, IO typically only provides a meaningful benefit for 15% of patients, but half of the refractory patients in the Nanobiotix ongoing immunotherapy study treated with NBTXR3 transformed into responders thus far.

“This is an ongoing study reporting on only 16 patients overall across 3 cohorts so far, but we believe this is a very big signal for overcoming resistance to anti-PD-1, and that the combination could be effective for anti-PD-1 naïve patients, too,” Levy said. “In the treatment naïve group, 4 of 5 patients had clinically meaningful tumor regression. For me, these data show promising signs that our product candidate may do something others can’t.”

According to the ASCO poster, the combination therapy suggests deep, sustained responses that extended survival time for some patients to 12 or more months.

“If we can replicate these results in 40 patients, I would call them revolutionary,” Levy said. “We are extremely excited.”

Two Phase II studies evaluating NBTXR3 in combination with anti-PD-1 in head and neck cancer are already underway as part of the company’s clinical collaboration with The University of Texas MD Anderson Cancer Center. Levy said those results will be reported as they become available.

Several other studies are being planned using NBTXR3 as a single agent activated by radiotherapy, in combination with IO, and in combination with chemotherapy. These include ongoing phase I studies in non-small cell lung cancer, pancreatic cancer, and esophageal cancer at MD Anderson. Additional indications may be included.

Levy believes the early success of NBTXR3 is based upon the physics-based nature of the therapy.

“Physics is universal. It doesn’t change from one patient to another,” Levy said. In contrast, “If you take 100 cancer cells from 100 different patients and apply a therapy, some cells die, some don’t, and some develop resistance because of variable biology…but a physics-based approach does not depend on biology. That’s why physics is so powerful.”

The primary focus, currently, is getting the product candidate approved and available to patients. The company received its first market approval from European authorities to treat patients with soft tissue sarcoma (which has a high amputation rate) in 2019 and is now focused on demonstrating a clinically meaningful benefit versus standard of care in head and neck cancer for global registration. Nanobiotix plans to launch a phase III study this year and received a Fast Track designation from the FDA in 2020 for the patient population in the study.

In Asia, Nanobiotix has partnered with LianBio to develop and commercialize NBTXR3 for head and neck cancer patients, who often are frail and elderly and, eventually, a minimum of four other indications. “LianBio is committed to helping us develop NBTXR3 in China and other Asian markets. They will also participate in our global Phase III clinical trials, recruiting 100 patients.

“Our strategy is to go where we can do the most good, with the aim of treating millions of patients around the world” Levy said.