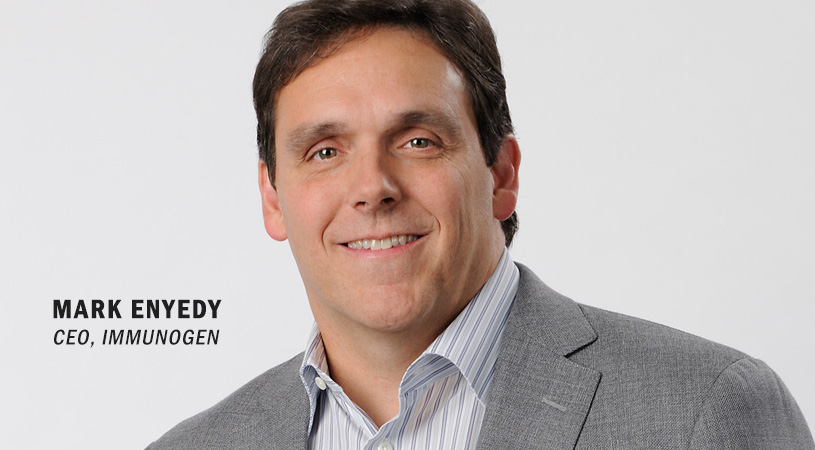 SAN FRANCISCO – It hasn’t been quite a full year since Mark Enyedy was tapped to helm Waltham, Mass.-based ImmunoGen , but for Enyedy, his first priority will be to get the company’s lead product through regulatory hurdles and take it to market.

ImmunoGen focuses on antibody-drug conjugates, which are monoclonal antibodies linked to biologically active drugs that enhance the effectiveness of chemotherapeutic agents. Enyedy said the goal of the company is to be the innovative leaders in the ADC space.

Enyedy was brought on board from Shire to shape the company’s delivery on late stage programs. Over the past months, Enyedy said the company has made significant progress and he sees tremendous potential for the company.

“We’re making the transitions we have wanted to since I’ve been here,” Enyedy said in an interview with BioSpace from the J.P. Morgan Healthcare Conference in San Francisco. “In the big picture, our goal is to build a fully integrated company. We’ve got the right strategy and the right plan.”

Enyedy said the company has seen encouraging data from a Phase Ib trial of its lead candidate, mirvetuximab soravtansine, an experimental ADC for FRa-positive cancers that has shown notable activity for FRa-positive ovarian cancer in early clinical testing. He said data has shown that mirvetuximab soravtansine compares favorably with standard of care and has been well tolerated.

The company is moving forward with a Phase III trial to assess mirvetuximab soravtansine as a single-agent therapy for platinum-resistant ovarian cancer. Enyedy said they will soon begin enrolling patients in the trial following a screening

In addition to the coming Phase III trial as a single agent therapy, in February 2016 ImmunoGen and Merck entered into a clinical research collaboration for the assessment of ImmunoGen’s mirvetuximab soravtansine in combination with Merck’s anti-PD-1 therapy, Keytruda, for the treatment of patients with FRa-positive ovarian cancer.

Another of ImmunoGen’s drug candidates that Enyedy is excited about is IMGN779 for the treatment of AML, a CD33-positive cancer. IMGN779 contains a CD33-targeting antibody—enabling it to bind to AML cells—with a cancer-killing agent. The drug is the first ADC to utilize one of ImmunoGen’s new family of indolino-benzodiazepine cancer-killing agents, which the company calls IGNs.

In April 2016, ImmunoGen announced the start of clinical testing of the company’s drug candidate. Enyedy said it’s a new spin on a small molecule that can disrupt the DNA. Unlike previous drugs that could create a double break in DNA strands, which could lead to liver toxicity as well as destroying cancer cells, IMGN779 can cause a single break in the DNA strand. Enyedy said normal cells can more readily repair a single break than a double break. Early data is showing some promise, with the potential for redosing. Enyedy said they are also seeing pharmaco-dynamic results, which are not quite clinical responses, but are promising. Enyedy said they anticipate seeing clinical responses as research continues to test various dosing levels.

While Enyedy said the company is moving in the right direction since he took over, there were some growing pains. In September the company cut 17 percent of its staff, about 65 jobs. At the time the company said the cuts will save ImmunoGen approximately $11 million annually, which would keep it running through mid-2018. It’s at that time the company anticipates data from mirvetuximab soravtansine.

While at the J.P. Morgan conference, Enyedy said company officials met with existing and potential investors and partners. He said the company is talking with potential partners for late stage products, including mirvetuximab soravtansine. He said they have been approached about partnerships for the lead program, but declined to provide any additional information.

“We’ll be exploring things over the next 12 months. We really do see ourselves as leaders in the ADC space and look to prove it in the clinic,” Enyedy said.