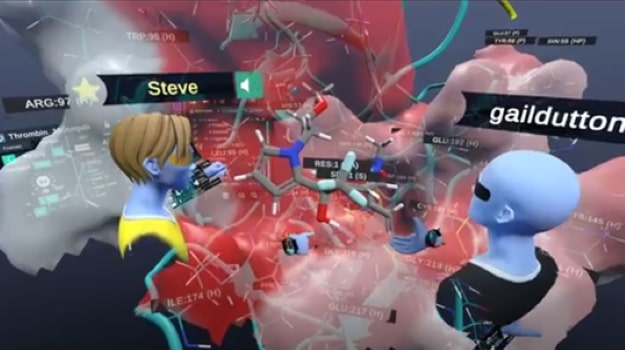 If you equate virtual reality (VR) to games or pain relief applications, you’re missing one of science’s most amazing tools. More than a dozen mostly large pharmaceutical companies and more than 250 academic sites are using VR meaningfully in scientific endeavors in molecular design and drug development.

Nanome Inc., founded in 2015, is the only commercial VR developer with a drug development application for scientific collaboration. More than 90% of its revenue is from biopharma companies.

“Nanome is not just about doing things in VR, but about analyzing things that may have been computed from things you’ve already invested a ton of computational resources to, but that you may not be understanding,” Nanome CEO Steve McCloskey said. “Nanome is a big front end for science. We want to help people see things better.”

I was fortunate enough to enter Nanome’s VR world its CEO Steve McCloskey. Here’s what happened.

Before the demo, I borrowed my son’s Oculus Rift VR headset (a Vive App also is available), established my own Oculus account, and downloaded the Nanome application. After Nanome signup process, I was advised to check my email, presumably for a confirmation code. Although that email didn’t arrive -- a common issue in VR -- pressing the “load” button on the sign-up site let me enter a basic “maneuvering in a virtual world” tutorial designed around the COVID-19 molecule. I used a generic avatar, but could have personalized my own.

McCloskey’s demo, a few days later, showcased the functionality and ease of use of this VR system.

It started with the “Load” menu. “The load menu lets you look at pretty much any protein or chemical structure,” he said. Using the laser pointer on my hand device, I could type in keywords for searching. Scientists can load their own molecules from their computers. 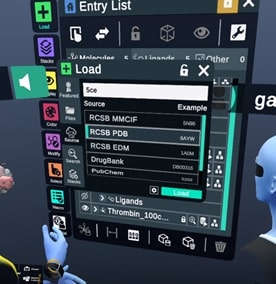 We chose the COVID-19 main protease – a popular search term – which appeared as a ribbon (Richardson) diagram to which skeletal representations of atoms were added. The active cleavage site was highlighted.

Next, he pressed a menu button to display the surface of the COVID-19 protease, “to give you better intuition as to the binding cavities of the binding pocket, and how much space you have to build out. It’s common for researchers to be in the binding pocket and make modifications,” he said. To demonstrate, McCloskey changed the benzene ring in the pocket to a morpholine structure by touching his choice of molecular structures on his wrist-based menu. He adjusted the bonds and noted that scientists “could recalculate different parameters, changing the chemical properties of the molecule to make it more or less effective.”

He called up the Stacks menu of plug-ins (chemical properties, electrostatic properties, hydrogens, etc.), which is “for activating things in the cloud. It lets you compute things like force fields, scoring properties, docking, accessing structures online…” 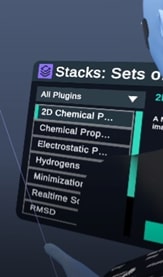 The application can support thousands of molecular dynamics simulation frames per molecular structure. This particular structure had about 100. “All the atoms have different force fields that interact with each other. Users can compute those interactions and use Nanome as a way to understand that data better,” McCloskey said. To my eye, the entire molecule shimmied. “There’s a lot of info you might miss on a 2D screen,” he noted.

Later in the demonstration, McCloskey imported a multi-molecule – a base protein and a ligand – from two different files. With a click of the menu in the virtual world, he aligned and docked two molecules, then played through chemical simulation files to find better fitting molecules for the main compound.

From a representation of the molecule’s surface, he used the site view macro to change the opacity from the surface view to see some of the interactions that were forming. Ribbon, skeleton, and surface views were arrayed atop each other.  “Here,” he said pointing to an atom, “you can see glycine 216 is forming a hydrogen bond with this part of the molecule.”

If a picture is worth a thousand words, the graphical capabilities of Nanome’s interactive, scaleable, 3-dimensional scientific collaboration tool is worth volumes.

To help researchers choose the most likely compounds to fit the binding pockets, the space has both a ranking component and a score component. Therefore, compounds can be rated one to five stars for broad categorization, but details for each component also are listed and scored for more detailed information about fit.

“We try to make it intuitive to build chemicals, scale the model and use the application programming interface (API) that connects with the back-end tools (like the Stack and other menus or features),” he said.

Virtual reality and artificial intelligence cand work hand-in-hand, he said. “A lot of pharmaceutical executives see it as AI vs. VR, but they’re actually synergistic. They often think AI can solve all their issues, but without analysis they’ll have a tough time. If they’re investing in AI, they also should invest in VR because it’s a better interface to help scientists understand that data.”

For example, “A biopharmaceutical company was looking at the binding pocket of a molecule, planning to build out the molecule to make it fit. They worked on this part,” McCloskey said, pointing to the left side of the molecule. “Within 30 seconds of seeing it VR, they realized they should have been focusing on the opposite side of the molecule based on the space and interactions.” The users dashed out of the VR room to call the contract research organization (CRO) to change the chemical and stop an approach they now knew would fail.

Nanome also has become a potent collaboration tool for scientists, letting them and their and clients meet in a dedicated room where they can brainstorm and converse alongside their molecule of interest – in its 3-D, scalable, interactive glory.  This is particularly helpful with multi-disciplinary teams, ensuring they see the same molecule, perspective, and iterations to better leverage information.

To enhance collaboration, Nanome includes a VR whiteboard and a camera to record the sessions. “Even when they are in VR, they still like to brainstorm in 2D,” McCloskey said. “It lets them ideate before running a simulation.”