A Rare Human Disease Has Been Found in Dinosaur Bones, Could it Lead to a Treatment? 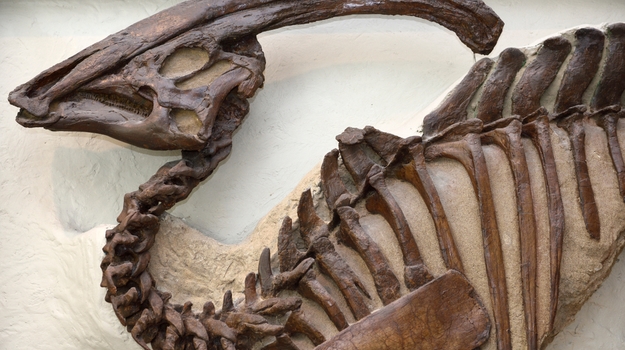 It is largely accepted that the dinosaurs were killed off due to an asteroid impact on the planet’s surface that created a chain reaction of climactic calamities – at least, that’s the primary theory. And while all that is left of dinosaurs are their bones, those fossilized pieces can still provide us with important scientific resources, including perhaps a key to at least one rare disease.

Researchers have discovered the remains of a dinosaur from what is now modern Alberta, Canada that contains evidence of having suffered a condition similar to a rare cancer of the bone marrow. In bone remains from a hadrosaur, a duck-billed dinosaur, researchers found lesions in tail vertebrae bones that are similar to the rare disease Langerhans cell histiocytosis (LCH), a type of cancer that begins in the bone marrow. Details of the study were published in Nature.

According to the Cleveland Clinic, LCH, previously known as histiocytosis X, is characterized by abnormal increases in white blood cells called histiocytes. The histiocyte cells help the body’s immune system fight infection and destroy foreign materials. The extra immune cells produced by this condition may form tumors, which can affect parts of the body like the bones and possibly spread to other areas, the clinic said on its website. It typically affects children between the ages of five and 10 years. There are less than 200,000 diagnoses annually. The most common form of LCH is eosinophilic granuloma. Most patients afflicted with LCH tend to recover, but the condition can cause pain and swelling.

“Langerhans cell histiocytosis historically was thought of as a cancer-like condition, but more recently researchers have begun to consider it an autoimmune phenomenon in which immune cells begin to overproduce and attack the body instead of fighting infection. In most cases it is not known why the disorder appears, although there may be a genetic link,” the Cleveland Clinic said on its website.

Because of the different ways in which LCH can affect the body, there are different treatment options for people diagnosed with the disorder. In addition to steroid treatments, surgery and anti-inflammatory treatments can be recommended. Radiation treatment and chemotherapy can be used in some patients, the Histiocytosis Association noted on its website.

After a detailed study of the lesions in the hadrosaur’s bones, the researchers confirmed that the issue afflicting the dinosaur was LCH. The researchers confirmed the diagnosis through macroscopic and microscopic analyses of the hadrosaur vertebrae and then compared to human LCH, as well as other pathologies. The hadrosaur pathology findings were indistinguishable from those of humans with LCH, supporting that diagnosis, the researchers said in their study abstract. The disease has been found in other animals, but this was the first time it was seen in a creature that died out millions of years ago.

Knowing that the disease has been discovered in dinosaurs could help lead to breakthroughs in potential treatments for the disease. Israel Hershkovitz, a palaeopathologist from Tel Aviv University who assisted in the study, told Science Alert that the goal of these kinds of studies, looking at disease states in long-dead creatures, could lead to an understanding of the causes of LCH and other diseases.

"Ultimately, the goal of such studies is to understand the real cause of these illnesses and what evolutionary mechanisms allowed them to develop and survive,” Hershkovitz told the publication. “Perhaps if we understand a disease's underlying mechanisms we can treat its causes more effectively, instead of focusing on the symptoms, as modern medicine tends to do.”