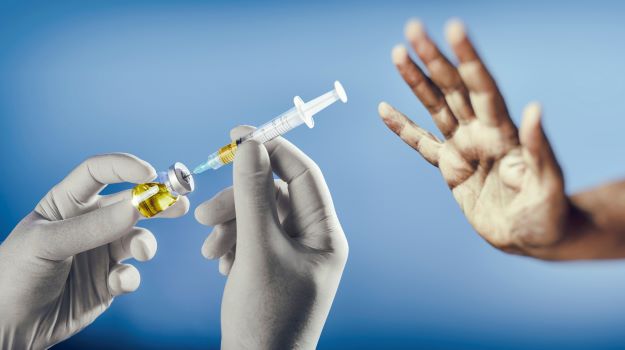 Americans are still hesitant to be vaccinated against COVID-19, according to just-released research from Invisibly.

The online survey of 5,537 Americans conducted between December 4 and 14, 2020 shows Americans nearly equally divided on their willingness to receive COVID-19 vaccines. Only 53% said they were willing to get the vaccine.

“That’s a shockingly low number, but it corresponds well with what JAMA has reported,” Don Vaughn, Ph.D., a neuroscientist and VP Data & Insights at Invisibly, which conducted the survey, told BioSpace.

Notably, trust in the vaccine and willingness to be vaccinated correlated to race and age, with Caucasian people and those age 55 and older saying they are most likely to take the vaccine. The survey found no other significant correlations among income, education, gender or other demographics.

“We’re seeing numbers now from California, reported in the Los Angeles Times, that 50% of front line healthcare workers (in Riverside County)  and 20-40% of Los Angeles County’s frontline workers refused to take the vaccine,” Vaughn said. “We presume they’re more medically educated, so…” hesitation among those outside of healthcare is less surprising.

Perhaps not surprisingly, people of color are most distrustful of the vaccine and thus the least likely to be vaccinated despite a higher incidence of COVID-19 in their communities. Of those not willing to be vaccinated:

Lisa Cooper, M.D., director of the Johns Hopkins Center for Health Equity and a former MacArthur "genius" fellow for her work in health disparities, explained the concern on NPR.

"In the Black community, there is skepticism that relates to historical experiences, and mistrust based on the discrimination that Black Americans face in the health care system and in the rest of society. It's really well-founded," Cooper said.

The overwhelming reason for this reluctance appears to be distrust of these vaccines (44%). Reports indicate that people are confused by medical terms and don’t understand how a safe vaccine was developed without cutting corners.

Vaughn has an additional explanation.

“A lot of people want to wait a bit,” Vaughn said.

An ABC poll confirmed it, with 44% of those respondents preferring to wait to see how those receiving the initial vaccines fared before rolling up their own sleeves.

In the Invisibly poll, most respondents said they will return to pre-pandemic activities only when officials say it is safe, while 23% said they would resume normal activities after most people are vaccinated. Until then, 75% said they plan to continue wearing a mask and social distancing. Notably, 25% said there are unlikely to wear a mask after vaccination.

Also, 47% of respondents think children should be required to be vaccinated against COVID-19 before returning to in-person learning. Given the low incidence of COVID-19 among children, 30% said vaccination should not be required for children and 23% were unsure.

According to the Centers for Disease Control and Prevention (CDC) Morbidity and Mortality Weekly Report for January 13, “Reported incidence and positive test results among children aged 0–10 years were consistently lower than those in older age groups.” Of the nearly 2.9 million laboratory-confirmed cases of COVID-19 in people younger than age 24 since the outbreak began, about 16% occurred in children aged 14-17; nearly 8% in those 11-13 years old; 11% in those 5-10 years old; and slightly more than 7% in those age 4 or younger.

Larry Corey, professor of medicine, Johns Hopkins Medical School, showed Kaplan-Meier curves concurrent with vaccine roll out that showed differences in the infection rate between vaccinated and unvaccinated individuals for both the Pfizer and Moderna vaccines.

The key to increasing vaccination rates begins with clear communication that translates the medical jargon into everyday language, followed by strategies that deliver ample quantities to vaccine where they are needed and clear guidance as to who is eligible to received the vaccines at given points in time.

For example, Washington state just entered Phase Ib of its vaccination plan and launched an online questionnaire  (http://www.FindYourPhaseWA.org) to help people know when and how to get vaccinated.

There’s still some confusion, though. One of the Phase Ib criteria includes people age 50 and older who live in multigenerational households. The definition of “multigenerational” in this context raises questions. The Washington State Department of Health defines it as two or more generations living together, although it’s often defined as three or more generations living together or grandparents caring for grandchildren. By way for example, the Washington State Department of Health says, “Think of a person over 50 who cannot live independently and receives long-term care from a caregiver, lives with someone who works outside the home, or lives with and cares for a grandchild.” Additional guidance is expected.

Regardless, throughout all 50 states and U.S. territories, people are queuing for vaccinations. Now that nearly 17 million doses of the vaccine have been administered, Vaughn said Invisibly plans to conduct another poll “in about a month,” to see whether attitudes have changed.