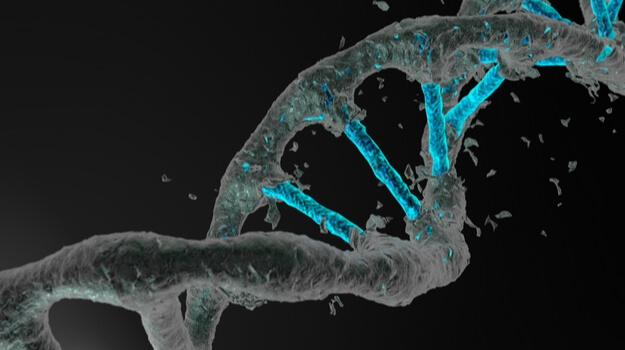 The process, called very fast CRISPR (vfCRISPR), works by caging guide RNA with light-sensitive thymine nucleotides, thus enabling Cas9 enzyme to bind to – but not cut – the targeted DNA. When the caged nucleotides were removed by exposure to a specific frequency of light, cleavage occurred at the binding site.

The team, led by Taekjip Ha, Ph.D., professor of biophysics and biomedical engineering, and Bin Wu, Ph.D., assistant professor of biophysics and biophysical chemistry, inserted the CRISPR/ Cas9 complex into cultures of human embryonic kidney cells and bone cancer cells. Twelve hours later they shone a light on the cells, thus activating the guide RNA. Within 30 seconds of activation, the CRISPR complex cleaved more than 50% of its targets.

Off-target activity was significantly reduced from traditional CRISPR methods, which typically use chemicals or ionizing radiation. Neither of those methods are specific to genomic locations, the researchers pointed out in a paper in Science.

Ha and Wu demonstrated they could activate the CRISPR cutting of double-strand breaks in DNA segments as small as a single gene. In the future, this may enable physicians to treat conditions triggered by only one abnormal gene, such as Huntington’s disease. The team has filed a provisional patent on this CRISPR technology.

The researchers attributed the faster kinetics of their vfCRISPR approach to “skipped nuclear localization or target-searching steps,” they wrote in Science. Cleavage efficiency, they said, was enhanced by using wild-type Cas9.

“The advantage of our technique is that researchers can get the CRISPR machinery to find its target without prematurely cutting the gene, holding back its action until exposed to light,” Johns Hopkins’ M.D.- and Ph.D.- candidate Roger Zou explained in a statement. “This allows researchers to have far more control over exactly where and when the DNA is cut.”

While this research is important for gene editing, it also will be valuable for studies of DNA repair. After cleavage, researchers watched the repair process under a microscope. They determined that DNA repair proteins started their work within two minutes of the CRISPR activation. The repairs were completed as soon as 15 minutes later. This means researchers can watch the activity in real time and make correlations.

For researchers, vfCRISPR’s precision and speed mean gene editing can be done in the lab on-demand. That enables real-time studies of DNA repair, thus expanding understanding of the DNA activity that causes aging and many cancers.

When CRISPR/Cas9 initially was introduced as a gene editing tool in 2013, it was heralded as “one of the most significant scientific advances in recent years.” It promised a revolutionary alternative to such gene-editing tools as zinc-fingers or, more recently, to new tools as NgAgo.

CRISPR works by using RNA as a guide to bind to a specific sequence of genomic DNA within a cell. Then the Cas9 enzyme within the CRISPR molecule acts as a scalpel to cut out that specific DNA sequence. The cell’s own enzymes and proteins repair the position of the cut. At this point, other genes can be spliced in to alter or repair gene functions for genetic-related conditions.

In hindsight, CRISPR was an innovative, but hardly perfect technology for gene editing. For example, as researchers point out, cleavage takes time and is rarely synchronous. Researchers have pointed out other challenges, too. Up to 20% of CRISPR editing instances resulted in deletions larger than 250nt – significantly greater than the normal deletions of less than 50nt indels. Some extended to several kilobases from the target site.

Light-induced CRISPR technology has been on researchers’ minds for years. In 2015, scientists at Duke University published results of their work using a light-inducible CRISPR/Cas9 system to control endogenous gene activation. A year later, researchers at MIT, collaborating with colleagues at The Broad Institute and Brigham and Women’s Hospital, published a strategy to photocage guide RNA. In 2018, scientists at Shanghai Ocean University used light-induced CRISPR for spatiotemporal control of zebrafish gene expression.

Research and applications into light-induced CRISPR will continue to increase. The reason is simple: vfCRISPR resolves many of the issues of the original technology by bringing much-needed speed and precision to gene editing, and thereby advancing a wide range of genomic research.