NEW YORK – Martin Shkreli and Turing Pharmaceuticals are under fire over a drastic 5,000 percent price spike for a drug that has been on the market for more than 60 years. 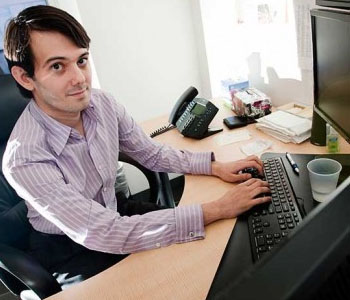 Turing, which launched earlier this year, acquired Daraprim from Impax Laboratories in August for $55 million. The medication was available for $13.50 per tablet, but Turing increased the price to $750 per tablet, which drastically raises the cost of treatment for patients. The drug, which was originally developed by GlaxoSmithKline, is used to treat toxoplasmosis. Shkreli and Turing have defended the price increase, saying the new revenues from the medication would be used to fund a research into developing new treatments for toxoplasmosis.

“We intend to invest in the development of new drug candidates that we hope will yield an even better clinical profile, and also plan to launch an educational effort to help raise awareness and improve diagnosis for patients with toxoplasmosis,” Shkreli said in an August statement after the company acquired the drug.

This morning though, he told the New York Times that Daraprim, more commonly known as pyrimethamine, is “so rarely used that the impact on the health system would be minuscule.” Shkreli said patients generally only take the medication for less than a year and the new price structure is more in line with other medications used to treat rare diseases.

“This is still one of the smallest pharmaceutical products in the world,” Shkreli told the Times. “It really doesn’t make sense to get any criticism for this.”

According to the U.S. Centers for Disease Control, toxoplasmosis is considered to be a leading cause of death attributed to foodborne illness in the United States. More than 60 million men, women, and children in the U.S. carry the parasite, but most do not show symptoms due to a health immune system. Those with compromised immune systems, including cancer patients, HIV patients and pregnant women are at risk without treatment. If not held in check by a healthy immune system or medication, the parasite can attack the brain and lead to blindness or brain damage.

The price increase has been met with criticism. Doctors have told several media outlets that the drug is an effective treatment and the cost could force some patients to seek alternative treatments that do not have the efficacy of Daraprim. There are no alternative brands for pyrimethamine. A letter sent to Turing by the Infectious Diseases Society of America implored Turing to reconsider the new pricing structure.

Under the current pricing structure, it is estimated that the annual cost of treatment for toxoplasmosis, for the pyrimethamine component alone, will be $336,000 for patients who weigh less than 60 kilograms and $634,500 for patients who weigh more than 60 kilograms. This cost is unjustifiable for the medically vulnerable patient population in need of this medication and unsustainable for the health care system,” the IDSA said in its letter.

Craig Rothenberg, a Turing spokesperson, told USA Today the company is working to ensure patients are covered by the medication, including “free-of-charge options for uninsured patients and co-pay assistance programs.”

In August Shkreli, a hedge fund manager turned pharmaceutical CEO, was sued by his former company Retrophin Inc. for $65 million over his use of company funds when he was atop that company. In its filings, Retrophin said Shkreli used company funds for personal use, enriched himself through false consulting contracts and referred to Shkreli as “the paradigm faithless servant” who “is not entitled to compensation or post-separation benefits.” Shkreli has dismissed the lawsuit, saying it is without merit. He also maintains Retrophin still owes him approximately $25 million.

In addition to toxoplasmosis, Daraprim is also used to treat malaria. This is not the first time the drug, which was originally approved by the FDA in 1953, has seen a price increase. The Times noted the drug was available for about $1 per tablet, but when the drug was bought from GSK by CorePharma in 2010, the price was increased, generating increased revenue for CorePharma.