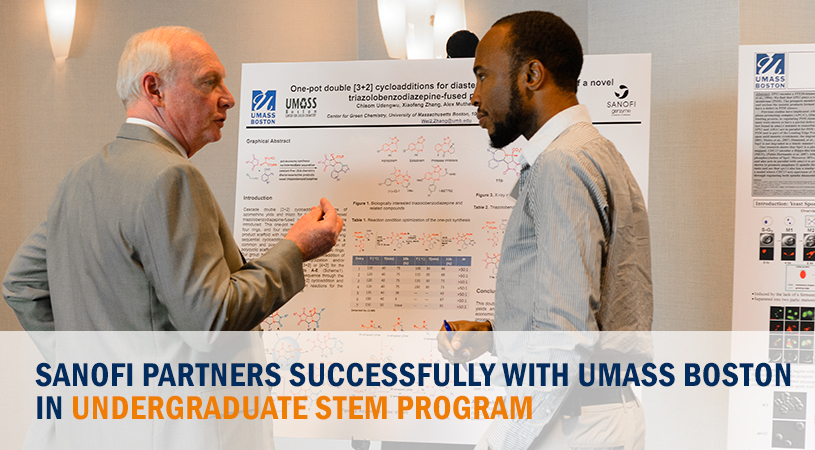 BOSTON – In an effort to bolster a potential talent pool for future hiring, Sanofi has partnered with the University of Massachusetts at Boston at Boston to improve STEM education at the university through a $1 million grant.

Jim Burns, head of Sanofi’s North America R&D hub in Boston, said the program was the brainchild of the university, but was something that Sanofi was happy to support.

“We believe there’s a need for promoting STEM education within the public universities in the Massachusetts area,” Burns said during an exclusive interview with BioSpace. “As we think about our workforce, about 5,000 here in Massachusetts, we need STEM graduates.”

STEM is an acronym for the academic focus on science, technology, engineering and mathematics. According to the United States Department of Education, there will be a significant jump in STEM-related job opportunities over the next five years. However, the federal government said there is a shortage of strong STEM programs in the country, which means there is a shortage of STEM-trained people entering the workforce.

“There is a concern that we’re not developing the STEM talent coming out of college that we need,” Burns said.

Burns said Sanofi partnered with UMass Boston because 75 percent of its graduates continue to live in the greater Boston area, which has one of the most robust life sciences communities in the United States. Burns said partnering with the university is both a chance to give back to the community, but also helps to create a workforce the company can later employ.

Burns said Sanofi partly chose UMass Boston due to its diverse student population that is overwhelmingly minority and female. He said students at some of the other private colleges across Boston, including Harvard University and the Massachusetts Institute of Technology, have a higher likelihood of exposure to some of the cutting edge discoveries being made in the area. The greater Boston area, which includes the square mile of Kendall Square in neighboring Cambridge, is home to a plethora of pharmaceutical and biotech companies.

The partnership includes $200,000 per year for five years from Sanofi to the university. But, the partnership goes beyond a mere financial donation. Burns said Sanofi works with UMass Boston to set up various events for the students, which includes chances for the undergraduates to present their work to Sanofi researchers.

“This is something our scientists really love to do. They get out of the lab and get to talk science with these young people,” Burns said. “These programs are really impressive and these are some really smart kids who need a chance and an opportunity.”

Sanofi’s partnership with UMass was established in 2013 and so far has been considered a success. Andrew Grosovsky, dean of the college of science and mathematics at UMass Boston, praised Sanofi for their partnership. He called it a great model that has seen student participation grow exponentially over the past few years.

“The coming together of the college and Sanofi has been mutually beneficial—there’s a confluence of stakeholders who are interested to see the economy in the area thrive and this is a very STEM-based economy,” Grosovsky said in a telephone interview. “We have to make sure the workforce, the leadership, everything that’s growing companies here and allowing them to be successful here is sustained.”

Grosovsky said he did not have career or postgraduate tracking information on the first students who went through the STEM classes, however, he did say the students were graduating at a 60 percent rate, which is higher than the national average.

And while the UMass program is considered a success, both Grosovsky and Burns said they hope to see more pharma companies forming partnerships with other universities across the country.

“I hope to see this expand beyond UMass Boston,” Burns said.