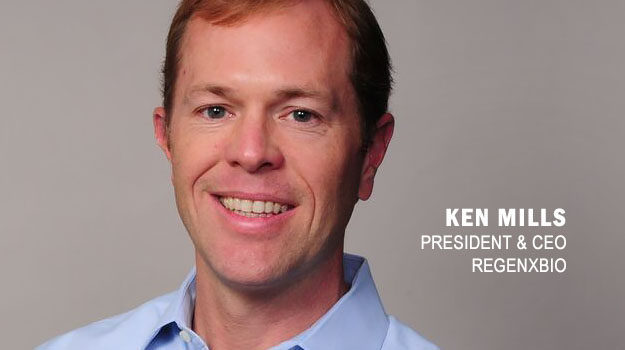 ROCKVILLE, Mary. – Taking a look back at the previous year Ken Mills, chief executive officer of REGENXBIO, said 2017 was a landmark year for gene therapy. He pointed to the regulatory approval of Spark Therapeutics’ Luxturna, as well as two CAR T programs for cancer as key verifications of the benefits of gene therapy.

While gene therapy is making strides across the industry, Mills noted that 2017 was also a key year for Maryland-based REGENXBIO, which is also moving forward with its own gene therapy programs that uses its NAV Technology Platform, a proprietary adeno-associated virus (AAV) gene delivery platform. Last year marked the first time the company began dosing patients in clinical trials. At the end of the year, the company had dosed 13 patients with RGX-314 for the treatment of wet age-related macular degeneration (wet AMD).

“It’s been a great year for the industry and REGENXBIO,” Mills told BioSpace in an exclusive interview.

Gene therapy treatment is a high risk, high reward venture, but the promises of a therapy developed through these programs could be life-changing for patients. The goal and promise of gene therapy are developing a treatment that only has to be administered once a decade or once per lifetime. Gene therapy essentially transforms cells inside a patient to harness their immune system to fight an invading disease on its own.

The Phase I Wet AMD dose-escalation trial will look at safety for increasing doses of the gene therapy, Mills said. The company is following the same models Genentech researchers used for that company’s Wet AMD treatment Lucentis, a drug that is in the same market as REGENXBIO’s experimental therapy. With RGX-314 being studied as a one-time treatment, Mills said it should work through the same pathways as the existing therapies, such as Lucentis.

In addition to dosing patients with RGX-314, the company also saw the first patients dosed with RGX-501. RGX-501 is being developed for the treatment of patients with homozygous familial hypercholesterolemia (HoFH). So far four patients have been treated in the Phase I/II trial with a single administration of RGX-501 in the dose-escalation clinical trial.

“In 2018, we’ll have one of the most diverse pipelines of gene therapy,” Mills said. “Our platform is broad and deep which will be attractive to companies who want to work with REGENX.”

Partnerships have been important to REGENXBIO. The company has forged agreements with companies like Audentes, Shire and Ultragenyx. The company also has a deal AveXis, which is using the company’s NAV AAV9 vector in a pivotal trial for SMA Type 1. Speaking of partnerships with other companies, Mills said they are important to overall research because no matter how much one company could realistically do it “wouldn’t scratch the surface” of all the needed disease research.

One key for the company last year was the hiring of Olivier Danos, a pioneer in gene therapy. Mills said Danos was in the laboratories when first experiments were being done on gene transfer. REGENXBIO created the role of chief scientific officer for Danos in March and Mills said the move is already showing dividends at the company.

“Bringing all that knowledge and experience to REGENXBIO was awesome,” Mills said. “He’s been an asset in helping aver function in the company. I’ve been most impressed with Olivier’s ability to recruit talent and his understanding in how to approach R&D as an innovative therapy company.”

While Mills said 2017 was a key year for REGENXBIO, there were some setbacks, notably the company’s failure to acquire Dimension Therapeutics due to rival suitor Ultragenyx. In September, just weeks after REGENXBIO announced it struck a $86 million deal to acquired Dimension, Ultragenyx, a company that licenses the NAV platform from REGENXBIO, came in offering far more money, $138 million. One month later Dimension announced it was going with the larger offer. Mills said Ultragenyx’s move was unexpected, but looking back on the situation he learned how disciplined his company could be when faced with a surprising obstacle. While REGENXBIO saw value in Dimension’s pipeline, Mills said he also now recognizes that Ultragenyx’s interest in the company was another positive nod toward the potential of gene therapy.

As Mills looks to the J.P. Morgan Health conference this week and beyond he said the company is positioning itself for eventual regulatory approval of a gene therapy product in 2018.

“This could be a significant year for REGENX,” Mills said.