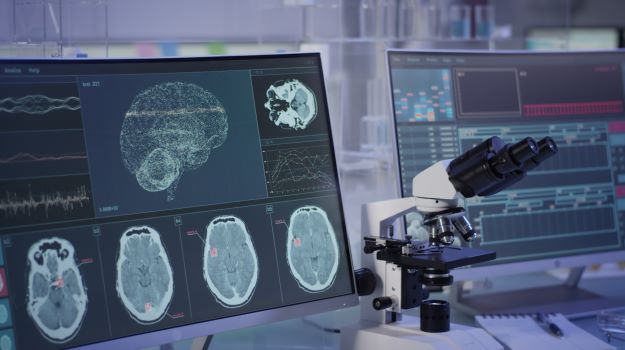 The American Academy of Neurology Annual Meeting (AAN) was held virtually and in person in Seattle from April 2-7. The event included the presentation of 2,400 abstracts and more than 200 presentations and 11 plenary sessions, all focused on neurology indications and research. Here’s a look at some of the highlights.

Alterity Therapeutics presented new data from its ongoing Biomarkers of progression in Multiple System Atrophy (bioMUSE) study. BioMuse is a natural history study tracking disease progression in people with Multiple System Atrophy (MSA). MSA is a Parkinsonian disorder. There are no approved therapies. The research is being performed with Vanderbilt University Medical in the U.S., led by Dr. Daniel Claassen, M.D., associate professor of neurology and principal investigator.

The research evaluated the relationship between iron accumulation and symptom severity in MSA patients. The data to date demonstrated that advanced quantitative MRI techniques showed pathological iron accumulation in MSA patients that was associated with the severity of the disease. It also supported quantitative susceptibility mapping (QSM) as a biomarker of disease severity in MSA.

“The ongoing bioMUSE trial continues to validate our approach of reducing iron accumulation to inhibit alpha-synuclein aggregation, rescue neurons and improve function in MSA patients,” said Dr. David Stamler, M.D., chief executive officer of Alterity. “We expect to launch our global Phase II clinical trial of ATH434 in early-stage MSA in the second quarter of 2022, and we are grateful to Dr. Claassen and his team for this important work to help guide our clinical development program.”

Biohaven’s Nurtec in Opioid Use Among Migraine Patients

Biohaven Pharma presented data associated with the benefit of Nurtec ODT (Rimegepant) in reducing the burden of opioid use among migraine patients in real-world clinical practice. The data came from a longitudinal and anonymized integrated commercial medical and prescription claims database. The patients in the study had at least 18 months of observation data, at least one opioid fill in the baseline period, and at least two Nurtec ODT fills during the follow-up period.

Nurtec ODT is the first and only calcitonin gene-related peptide (CGRP) receptor antagonist available in a quick-dissolve ODT formulation approved by the U.S. Food and Drug Administration (FDA) for acute treatment of migraine with or without aura and the preventive treatment of episodic migraine in adults.

Results of the analysis found the overall opioid discontinuation rate after starting Nurtec ODT was 40.5%. The overall mean monthly opioid prescription fills dropped by 16.1% and MMEs (morphine milligram equivalents) were reduced by 2.8%.

ProMis Neurosciences presented preclinical research on amyotrophic lateral sclerosis (ALS). RACK1, a receptor of activated C-kinase 1, is a well-conserved protein that has more than 100 recognized activities. In sporadic ALS, co-aggregation of RACK1 with TDP-43 inclusions has been observed, with researchers suggesting it might be “part of a pathogenic interactome involving the two proteins.”

Working in Drosophila fruit flies, the company presented research on whether knockdown of RAC1 in mature cells might help against TDP-43-related pathology. The data were consistent with a pathogenic interaction between the two proteins in misfolded protein aggregates, which support RACK1 as a therapeutic target.

The data came from the company’s Phase IIb BeyoND trial in 114 participants. The analysis showed that ND0612 treatment was safe and well-tolerated in the long term in this patient population. The patients in the long-term extension period were beyond at least one year of treatment, with some entering their sixth year.

“At this time, ND0612 is the only investigational subcutaneous, continuous levodopa/carbidopa treatment with safety data extending beyond one year,” stated Dr. Stuart Isaacson, M.D., author of the study poster and associate professor of neurology, FIU and director, Parkinson’s Disease and Movement Disorders Center of Baca Raton, Fla. “This latest data reinforces a positive long-term safety and tolerability profile of ND0612, indicating it has the potential to become a convenient and safe treatment option for those struggling with motor fluctuations in Parkinson’s disease.”