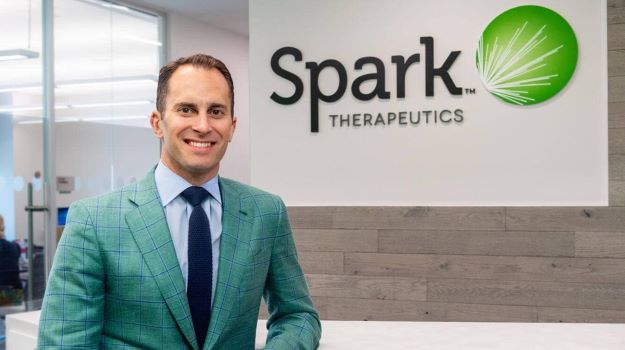 Jeffrey D. Marrazzo, the co-founder of Spark Therapeutics, guided the company to the launch of the world’s first regulatory-approved gene therapy for genetic diseases and helmed the company’s merger with Swiss pharma giant Roche. Now, he is stepping down from his role as CEO. Ron Philip, Spark’s COO, will take over the role.

Marrazzo, who helped transform Spark from a research center within the Children’s Hospital of Philadelphia into a privately-held company, will formally step down from the role of CEO on April 1. Over the course of the past nine years, he helped bring about Luxturna (voretigene neparvovec), a gene therapy for a rare form of genetic blindness, took the company public with a $161 million public offering and grew Spark to more than 800 employees.

Marrazzo was also instrumental in helping Spark establish a $575 million gene therapy innovation center on Drexel University’s campus in downtown Philadelphia last year. The site is expected to provide 500,000 square feet of space. Spark said at the time the deal was struck that the new site will “bring hundreds of the greatest minds in gene therapy together under one roof to drive science forward, challenge the inevitability of genetic disease and serve as a Roche global center of excellence for gene therapy manufacturing.”

“I am incredibly proud of what we’ve built at Spark: from my first meetings in 2011, when the company was merely an idea, to now as the gene therapy center of excellence at one of the largest healthcare companies in the world. I’ve had the remarkable privilege to be part of an incredible team and work on cutting-edge science that has the potential to change people’s lives,” Marrazzo said in a statement.

Marrazzo stayed in his role longer than some other long-time Spark employees following the merger, including co-founder Katherine High, the longtime head of research and development, who left the company ahead of the finalization of the deal with Roche. Former Chief Medical Officer Kathleen Reape also left the company ahead of the merger, although she had only been in that role since 2016.

“As one of Spark’s co-founders, he has led the company to the success it is today: championing patients and redefining the frontiers of science, with an impressive portfolio of potential gene therapies, as well as an on-market treatment for inherited retinal disease,” Schwan said.

Philip, who is taking over as CEO following Marrazzo’s departure, has served as both COO and chief commercial officer since joining the company five years ago. During his role as CCO, Philip also played an instrumental role in the commercial launch of Luxturna. He also helped guide the merger with Roche. Prior to his tenure with Spark, Philip held leadership roles at Wyeth, Merck, Deloitte and Pfizer.

Marrazzo said Spark is being left in the best hands possible to continue to drive innovation at the company, including its work in hemophilia (one of the key drivers for the Roche acquisition), lysosomal storage disorders and neurodegenerative disease.

“When I think about Spark’s future, I’ve long viewed Ron as the next person to take over at the helm–not only is he a steadfast leader, he’s been instrumental in developing Spark’s gene therapy pipeline and has a deep understanding of Spark’s unique culture,” Marrazzo said. “Under Ron’s leadership, I know that Spark is well-positioned to deliver on the full promise of gene therapy.”

Philip expressed his gratitude to Marrazzo for the strong foundation he helped lay at Spark Therapeutics and within the gene therapy sphere.

“Jeff’s pioneering spirit is part of Spark’s DNA, and it will serve us well into the future,” he said in a statement. “I am humbled and honored to lead Spark’s talented team as we continue our important work — developing gene therapies with the potential to dramatically and positively change the lives of the patient communities we serve.”

Looking ahead, Philip pointed to the promise of gene therapy in treating patients with rare diseases. He said it’s the possibilities of what can be accomplished that drive the company each day.