Company pursuing legal action against the FDA for requiring unnecessary studies that would result in the death of dozens of dogs without legal authority.

WASHINGTON, Feb. 5, 2019 /PRNewswire/ -- Vanda Pharmaceuticals Inc. (Vanda) has filed a complaint against the U.S. Food and Drug Administration (the FDA) requesting that the court lift a partial clinical hold the agency illegally imposed prohibiting Vanda from studying a promising new drug in humans for more than 12 weeks without conducting unnecessary and unethical animal studies. 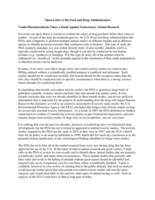 Vanda has taken this legal action as it works through the FDA development process for tradipitant, a potential treatment for several human conditions including gastroparesis.

During the course of drug development, animal studies are routinely conducted to identify potential toxicities in humans. FDA guidance documents outline the types of animal studies, including the appropriate species and duration, that are recommended to provide sufficient evidence of safety before a drug is studied in humans. However, the recommendations in FDA guidance documents are not legally binding on either the FDA or drug developers. If a company submits information to the FDA to show that further study in humans would be safe based on different information, the FDA is supposed to evaluate the company's proposal and make a case-specific, science-based determination as to whether it agrees.

In Vanda's case, the FDA did not do so. It has instead treated a non-binding recommendation that nine-month non-rodent toxicity studies should be conducted before a drug is studied in humans for longer than three months as a non-negotiable requirement. Solely because Vanda has refused to conduct this study, which usually involves young beagles as the test subjects, each of which must be "sacrificed" to permit evaluation of the animal's tissues, the FDA has placed a partial clinical hold on Vanda's studies of tradipitant. Tradipitant studies can proceed up to 12 weeks duration. The FDA has imposed this partial hold without providing any specific scientific justification. As a matter of law, the FDA is not permitted to do that. As a result, Vanda has sued in federal court for judicial relief.

Numerous preclinical animal studies have already been conducted with tradipitant, including a three-month rat study, a six-month rat study and a three-month dog study, at doses up to 300 times the intended human equivalent dose. These studies have not identified any clinically relevant safety signals for humans. Clinical studies of tradipitant in humans have also suggested that tradipitant is well-tolerated, as have clinical and preclinical studies of drugs in the same class as tradipitant. In addition, scientific literature has shown that nine-month studies in dogs are unlikely to identify clinically relevant safety signals that are not already identified in three-month studies.

"We believe that there is no scientific justification for the requirement that tradipitant be tested in a nine-month dog study, given its currently understood safety profile in both animals and humans, and further, that these studies should not be a routine requirement for all sponsors," said Mihael H. Polymeropoulos, M.D., Vanda's President and CEO. "The FDA is ignoring a large body of published scientific evidence which concludes that these chronic dog studies do not offer any additional useful information. That policy is based on old, outdated science and requires the killing of too many dogs without any scientifically justified purpose. Yet, companies have been reticent to stand up to the FDA and demand that it change its policy. Vanda is unwilling to accept the status quo."

Vanda proposes that the FDA has violated the law by making nine-month dog toxicity studies a de facto requirement, with the threat of severe consequences, such as a clinical hold and the threat of civil injunction or criminal prosecution, if disregarded, without promulgating this "requirement" as a regulation under the required notice-and-comment rulemaking procedures. Federal government agencies must propose regulations and solicit comments from the public before they are finalized and treated as binding, but the FDA failed to follow that procedure here.

"We believe that we have an ethical responsibility to reduce, refine and replace animal experimentation to the maximum extent possible," said Dr. Polymeropoulos. "While the FDA purports to aspire to the same goals, its refusal to entertain alternatives to a nine-month dog study based on tradipitant's efficacy results to date, clean safety record, and the unmet medical need for gastroparesis treatments, suggests otherwise."

Along with filing the lawsuit, Vanda has released an open letter (here) urging others to join the company in demanding that the FDA review and revise its outdated policy.

ABOUT VANDA PHARMACEUTICALS INC.:
Vanda is a global biopharmaceutical company focused on the development and commercialization of innovative therapies to address high unmet medical needs and improve the lives of patients. For more on Vanda Pharmaceuticals Inc., please visit www.vandapharma.com.