The deal centers around uniQure’s S100A1, a calcium sensor that has been shown to restore much of the heart’s function in congestive heart failure models. The news of the collaboration sent uniQure’s stock soaring this morning, up more than $10 per share from its close of $22.86. The stock has traded as high as $35.50 per share this morning. 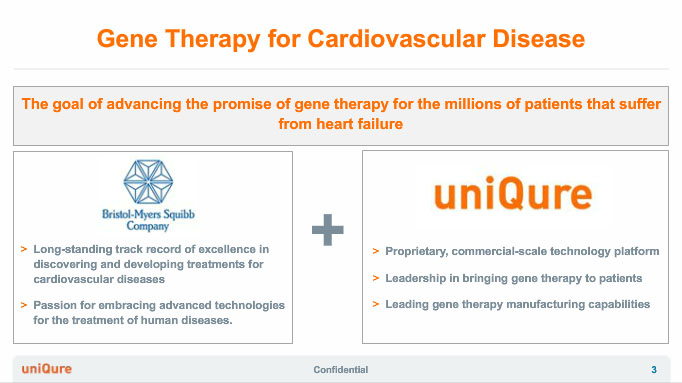 Under terms of the agreement Bristol-Myers Squibb will make near-term payments of approximately $100 million, including an upfront payment of $50 million for rights to uniQure’s lead gene therapy candidate and three additional potential therapies. UniQure will be eligible to receive research, development and regulatory milestone payments, including up to $254 million for the lead S100A1 therapeutic and up to $217 million for each other gene therapy product potentially developed under the collaboration.

UniQure is also eligible to receive net sales based milestone payments and tiered single to double-digit royalties on product sales. Additionally Bristol-Myers will acquire a 5 percent ownership in uniQure before the end of the year. The companies plan to collaborate on 10 projects, but the collaboration could expand beyond cardiovascular research, the companies announced this morning during a webcast.

“This collaboration will accelerate the application of gene therapy for large patient populations suffering from heart diseases and will complement the further development of uniQure’s internal pipeline in two focus areas: liver diseases, including hemophilia, and CNS, including lysosomal storage diseases,” Jörn Aldag, chief executive officer of uniQure said during the morning’s webcast.

Aldag said he expect the partnership to be complete sometime during the second quarter of this year. With the infusion of funding and the future of gene therapy, Aldag said he anticipates 2015 will be a good year for uniQure.

In addition to the deal with Bristol-Myers uniQure has initiated the first clinical trial site in Germany for its clinical trial in Hemophilia B patients and anticipates providing top-line data and initial results on this trial in the second half of 2015, Aldag said.

Also, the company revealed the results of a six-year study of its gene therapy drug Glybera, designed to restore the LPL enzyme activity of the pancreas. The company said after a single administration of Glybera, patients have experienced reductions in both the frequency and severity of pancreatitis. 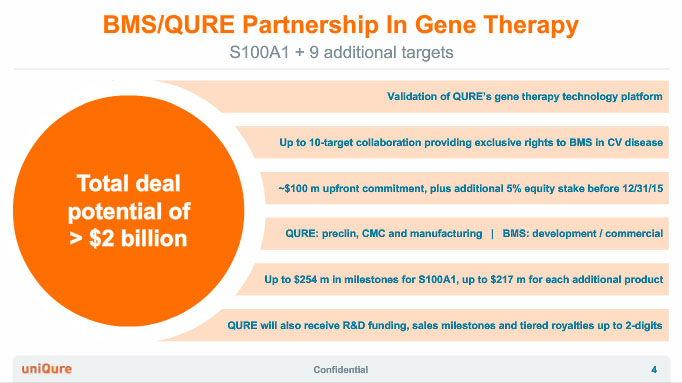 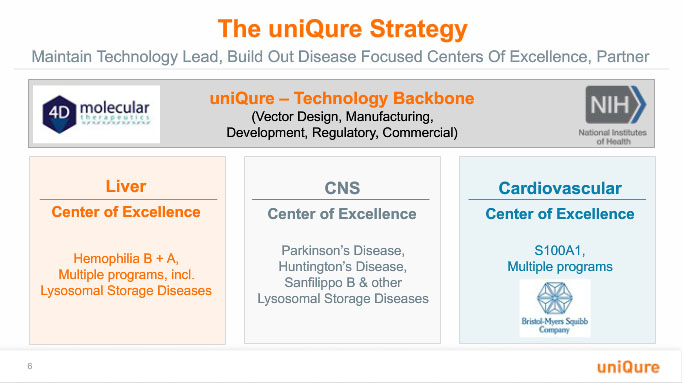 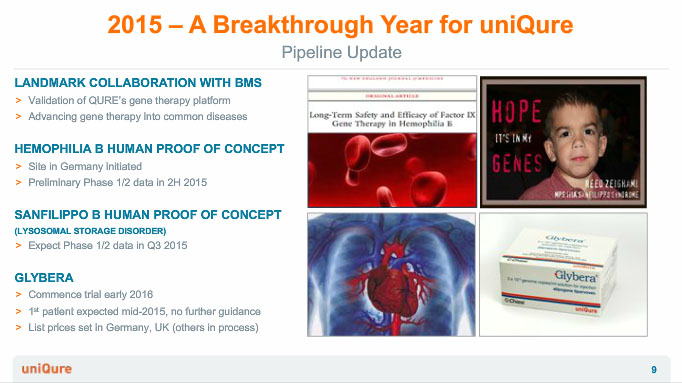 BioSpace Temperature Poll
After last week's news that Gilead had issued a health advisory to doctors, concern is growing after nine patients taking Harvoni or Sovaldi along with another drug, amiodarone, were treated for abnormally slow heartbeats. One of the patients died of cardiac arrest. Three of the nine patients required a pacemaker. That has BioSpace asking, what next?