What is a Team Resume?

What is a Team Resume? 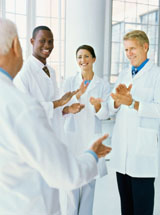 The individual resume is a tried and true tool of job hunters everywhere.

But in this collaborative era, a team resume may be far more compelling.

What is a team resume? Simply a history of accomplishment built around the power of the team model.

Why should an individual bother to describe the group’s achievements? For many goals, teams can be much more powerful than individuals.

One reason for their power is that teams can execute multiple tasks simultaneously – they parallel process without parallel. Although we all have the idyllic picture of the lone scientific genius pouring over experiments in an effort to discover something, we all know that in the real world, a team can break apart and simultaneously address tasks. This saves time. It also helps ensure no nasty surprises at the end of the effort.

A second team advantage is the application of numerous organizational perspectives to a common goal. Teams are composed of cross-functional expertise. Certainly, groups of individuals could do this, but in most organizations, groups are set up uni-functionally -- in silos. Silos utilize a hand-off model and are allergic to real time, concurrent effort.

Another benefit is the natural competitiveness of a team. Competition doesn’t necessarily require argument or belligerence – but it does reflect the fact that the natural crucible of varied interests in a team can help ensure that solutions are shaped by all the relevant interests.

So, how does the individual resume writer transform the document into a team resume?

First, let’s think about the body of the resume.

It’s not necessary to create an entirely separate document (although in some instances, an all-team resume could be another persuasion document). Look at your overall career history and select two or three examples of team excellence. At least one example should reflect an instance in which you performed some leadership or decision-making role.

Next, for each team example, identify how the group approach was more powerful than an individual effort. For example, did parallel processing by a team save time and/or money? Were multi-functional solutions superior to that created by just one silo’d individual?

Lead with such a benefit and translate typical resume-speak into team-speak. For example, a traditional resume might contain language such as “led therapeutic area team in charge of phase 1 through 11b clinical trials”. Time being of the essence, the team resume entry might be something such as “shaved six months from phase 1-11b by collaborating with team to re-conceptualize critical steps.”

Now, how about the infamous lead paragraph, the executive summary of your career? Spike it with a team accomplishment and your invaluable contribution thereto. Maybe you want to highlight your expertise in managing a virtual global business development team. Instead of just stating that rather bland fact, you might summarize: “doubled licensing pipeline by tapping cross-country skills of virtual global BD team”. Now your resume can sing the praises of you, the individual, and of you, the team impresario.

Sign up for the free weekly Career Insider eNewsletter.