“The Company is most encouraged by these data, further indicating a long anticipated potential against H. pylori, a significant pathogen with a particular prevalence in the neighboring Asia-Pacific region,” said Dr. John Prendergast, Recce Pharmaceuticals Non-Executive Chairman. “This study further endorses our ever promising therapeutic potential to advance a new class of synthetic antibiotics and anti-infectives for the treatment of a wide spectrum of pathogens capable of causing deadly infections. While Recce is pleased with these results, they do not mean that the RECCE® 435 compound will be safe or effective for use in humans.”

The efficacy study was conducted by an independent Contract Research Organization to assess oral dose-dependent efficacy of RECCE® 435 in-vivo (rats) against a clinical isolate of H. pylori. H. pylori is a species of Gram-negative bacteria commonly infecting the lining of the stomach and upper digestive tract. There is no available first-line therapy that is curative in all patients at this time and it is a major cause of morbidity and mortality worldwide; it is estimated more than 50% of the global population is infected.1,2

In the study, five groups of 10 rats each were observed. Three of these groups were treated with varying doses of RECCE® 435 (250, 500, 1,000 mg/kg) and dose-dependent efficacy was seen at all doses with significant reduction in bacterial load. Upon completion of the study, a urease test was carried out upon the stomach lining to confirm the presence of H. pylori in the subjects. Helicobacter pylori can survive within the acidic environment of the stomach by producing an enzyme called urease. Therefore, H. pylori presence was measured by a urease diagnostic test in the stomachs of rats in the study with those. No signs of toxicity were observed at any dosage level throughout the efficacy study.

RECCE® 435 mg/kg dosing is based upon ‘total administered solution’. A significant proportion of RECCE® 435 administered solution quoted includes inactive components such as diluent/water and stabilizing medium. The Active Pharmaceutical Ingredient (API) as is sometimes the quoted mg/kg of the comparative product/s, likely to dramatically benefit by way of reduction to the otherwise stated RECCE® figure.

This study assessed a combination of two broad spectrum antibiotics being used – Amoxicillin and Clarithromycin. Amoxicillin was used at a higher dosage, being one of the most active antimicrobials against H. pylori.3 This standard therapy has recently been undermined by its ineffectiveness for a number of reasons including the development of high resistance rates and the lack of novel drugs.

An additional independent study examining the safety of oral dosing of RECCE® 435 up to 500mg/kg was administered to groups of five mice each twice daily for seven days, compared to water-only administration. The data indicates their feeding habits, which contributes to weight gain, were not negatively impacted, supporting overall general and gastrointestinal health.

A photo accompanying this announcement is available at https://www.globenewswire.com/NewsRoom/AttachmentNg/c1a9300a-c2e6-42a9-98ed-3c7e276d7300

H. pylori was recently added by the FDA to the Agency's list of qualifying pathogens that have the potential to pose a serious threat to public health. As a result, drug treatments being studied for patients with H. pylori infection have been granted Qualified Infectious Disease Product (QIDP) designation. In addition to H. pylori increasing risk of ulcers and other gastric diseases, research suggests that some 35-60% of gastric adenocarcinomas are attributable to H. pylori infection.4

The World Health Organisation (WHO) also lists H. pylori as a priority pathogen on its list of antibiotic-resistant bacteria that pose the greatest threat to human health.5Helicobacter pylori is known to cause stomach inflammation (gastritis) and more serious conditions such as stomach ulcers and stomach cancer.6

Recce antibiotics are unique – their potency does not diminish even with repeated use, a common failure associated with existing antibiotics and their propensity to rapidly succumb to resistant superbugs.

Patented lead candidate RECCE® 327, wholly owned and manufactured in Australia, has been developed for the treatment of blood infections and sepsis derived from E. coli and S. aureus bacteria – including their superbug forms. 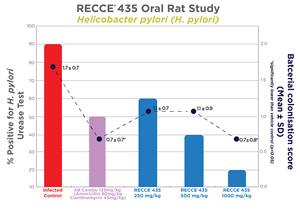 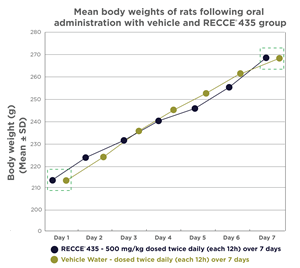