Dr. John Prendergast, Non-Executive Chairman of Recce Pharmaceuticals said, “Gonorrhea has developed resistance to all but one class of antibiotics, so there is an urgent need to find a new class of effective antibiotics to kill the pathogen, before it develops resistance to the last recommended treatment. Data from this study, along with previous other reports, continue to highlight the potential of RECCE® 327 to not only become a potent broad spectrum antibiotic but most critically to continue working against antibiotic resistant bacteria or superbugs, even with repeated use.”

The study was conducted by an independent Contract Research Organization to assess the dose-dependency of RECCE® 327 and in vivo antibacterial activity against Neisseria gonorrhoeae (N. gonorrhoeae), a species of Gram-negative bacteria, and the second most common sexually transmitted infection (STI) globally.1 The recognized vaginal infection model met its primary endpoint of a reduction in bacterial load compared to vehicle infected control evaluated on the seventh day following dosing.

Three groups of 10 female mice each showed RECCE® 327 efficacy at different dose levels with significant reduction in bacterial load in the vaginal infection as compared to the vehicle control (p<0.05).

In this study Meropenem, a broad spectrum carbapenem antibiotic, was used at its optimum dose as the recognized efficacy model. In practice however, Meropenem’s high rates of bacterial resistance have recently led to restriction of its use, now reserved for infections caused by resistant organisms.2

The World Health Organization (WHO) lists N. gonorrhoeae as a priority pathogen on its list of antibiotic-resistant bacteria that pose the greatest threat to human health.3 The leading national public health institute of the U.S., the Centers for Disease Control and Prevention (CDC) estimates drug-resistant N. gonorrhoeae results in 550,000 infections each year, with a total of 1.14 million infections from N. gonorrhoeae annually.4

Recce antibiotics are unique – their potency does not diminish even with repeated use, which is a common failure associated with existing antibiotic use and the resulting emergence of resistant superbugs.

Patented lead candidate RECCE® 327, wholly owned and manufactured in Australia, has been developed for the treatment of blood infections and sepsis derived from E. coli and S. aureus bacteria – including their superbug forms.

Photos accompanying this announcement are available at

Efficacy of RECCE® 327 Against Neisseria Gonorrhoeae in Mice

Efficacy of RECCE® 327 Against Neisseria Gonorrhoeae in Mice 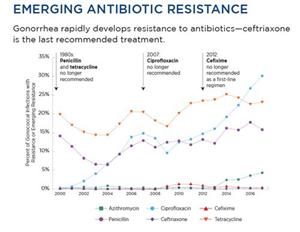