Data showed a significant dose-dependent decrease in the viral growth rate and viral load in lungs of mice infected with Influenza A following treatment with RECCE® 327 compared to the vehicle control group, and group treated with an approved antiviral drug ribavirin, also known as tribavirin.

A photo accompanying this announcement is available at https://www.globenewswire.com/NewsRoom/AttachmentNg/c988a256-3ccb-4275-926b-fa0f50f3ba31

NA – Not Applicable
BLOQ – Below Limit of Quantitation

The study was conducted by an independent Contract Research Organization to assess the dose-dependent efficacy of RECCE® 327 and in vivo anti-viral activity against Influenza A, a respiratory lung infection, in mice. RECCE® 327 treatment groups were dosed twice-daily for five days and the ribavirin treatment group was dosed once daily for five days (optimized dosing for latter). Viral pathogenesis in the mice was evaluated by body weight loss, survival and viral load in lungs.

The results demonstrated RECCE® 327 showed a significant dose-dependent decrease in viral load in the lungs compared to the vehicle control and ribavirin – a drug that decreases relapse rates by accelerating viral clearance early in the treatment course1.

Four groups of 12 mice infected with Influenza A showed those treated with RECCE® 327 fared better in almost all instances than those who received the ribavirin treatment, an approved antiviral drug, or vehicle control group. RECCE® 327 continued to show efficacy at different dose levels with significant reduction in viral count in the lungs when compared with the vehicle control. As dosage increased from 500mg/kg to 1,000mg/kg, the viral count fell below the limit of quantitation (BLOQ) on days four and six post-infection.

Michele Dilizia, Executive Director of Regulatory Affairs, said, “These data reinforce RECCE® 327’s unique, universal mechanism of action, seen against bacterial cells and further now, viral particles. The universal mechanism of action shows continued potency against mutating bacterial cells and it is exciting to see the potential here as well, against viral particles, which are also notorious for their mutation.”

Dr John Prendergast, Non-Executive Chairman said, “The increasing potential to be effective against not only a broad range of superbug bacteria, but viral pathogens as well, reinforces the company’s expanding infectious disease capabilities and global positioning.”

Recce antibiotics are unique – their potency does not diminish even with repeated use, which is a common failure associated with existing antibiotic use and the resulting emergence of resistant superbugs.

Patented lead candidate RECCE® 327, wholly owned and manufactured in Australia, has been developed for the treatment of blood infections and sepsis derived from E. coli and S. aureus bacteria– including their superbug forms.

Efficacy of RECCE® 327 Against Influenza A Lung Infection in Mice 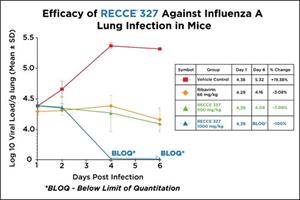 Efficacy of RECCE® 327 Against Influenza A Lung Infection in Mice