Watch a video of Dr. Magdalena Cerdá outline the mission and goals of the Center for Opioid Epidemiology and Policy: https://bcove.video/2KEuzuN

NEW YORK, June 27, 2019 /PRNewswire/ -- According to the National Institute on Drug Abuse, more than 130 people die from opioid overdoses every day across the United States. NYU Langone Health has announced the creation of the Center for Opioid Epidemiology and Policy to track and investigate the causes of emerging trends in opioid misuse, disorder, and overdose, to inform policies to prevent opioid misuse, disorder and overdose, and to figure out how to protect communities from the direct and indirect downstream effects the opioid crisis can have on the health of families and communities. 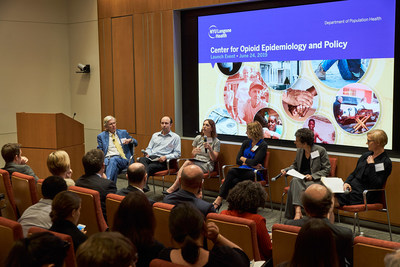 The new center, led by Magdalena Cerdá, DrPH, associate professor in the Department of Population Health at NYU Langone, uses a multidisciplinary approach to develop scientific evidence on the nature, causes, and consequences of the opioid overdose epidemic.

"The opioid overdose epidemic is constantly evolving. While it originated with prescription medications and street drugs such as heroin, it's now become even more deadly because of the influx of potent synthetic drugs such as fentanyl, which are often obtained illegally," says Cerdá. "Our hope is that better insight into the drivers and consequences of this epidemic will create actionable knowledge for policymakers and public health officials to better address the crisis and hopefully prevent future overdose epidemics."

The new center will focus on four domains of work:

Substantial gaps remain in understanding the causes and consequences of opioid misuse, the differences in factors that shape drug market supply and demand, and the effectiveness of policy responses and other interventions. The Center for Opioid Epidemiology and Policy will build on NYU Langone's strengths in population health, epidemiology, biostatistics, comparative effectiveness and decision science, health policy, neuroscience, psychiatry, economics, and emergency medicine to advance scientific knowledge and inform policy to address this crisis before it worsens.

"Under Dr. Cerdá's leadership, the Center for Opioid Epidemiology and Policy builds on a long track record of work at NYU Langone to address problems associated with opioid misuse," says Dafna Bar-Sagi, PhD, senior vice president and vice dean for science and chief scientific officer at NYU Langone. "The center's focus on societal drivers and consequences of the opioid overdose epidemic, while also keeping an eye on the horizon to catch 'what's next' in this fast-moving crisis, will be critical to effectively combatting this major challenge."

At the center's inaugural symposium earlier this week, Wilson M. Compton, MD, MPE, Deputy Director of the National Institute on Drug Abuse (NIDA) of the National Institutes of Health, acknowledged the complexity of the opioid crisis, and how economics have been a key—and often overlooked—driver of the epidemic. "The complexity of these issues demands a multipronged response," said Compton in his opening remarks. "This center will be a phenomenal national resource to address these issues here in New York and across the country."

The proportion of deaths attributable to opioid overdose rose by nearly 300 percent from 2001 to 2016 and continue to rise. However, according to Cerdá, for every fatal overdose, an unknown but large number of individuals suffers from chronic opioid use disorder and non-fatal overdose, with devastating consequences. Cerdá stresses the importance of investigating why some geographic regions are more vulnerable than others to opioid overdoses, as well as evaluating the effects of current policy solutions to the epidemic, such as increasing access to naloxone (a medication designed to rapidly reverse opioid overdose), and to evidence-based treatment for opioid use disorder.

One area of focus for the center is the role that opioid marketing to physicians has played in shaping drug markets and supply. Earlier this year, Cerdá and her team of investigators published findings in JAMA Network Open, showing that increased marketing of opioid products to physicians—from consulting fees to free meals—is associated with higher opioid prescribing rates and elevated overdose deaths in the majority of U.S. counties.

"With 1 in 65 deaths in the U.S. being opioid-related and many more suffering from chronic opioid abuse and nonfatal overdose, the Center for Opioid Epidemiology and Policy is arriving on the scene during a critical time in the epidemic," said Marc N. Gourevitch, MD, MPH, the Muriel G. and George W. Singer Professor and chair of the Department of Population Health at NYU Langone. "Its focus on research and education, inclusion of multidisciplinary faculty and staff, and its commitment to evaluating interventions and policies taking place outside of the healthcare system, aligns with the mission of our department."

Watch a video of Dr. Magdalena Cerdá outline the mission and goals of the Center for Opioid Epidemiology and Policy: https://bcove.video/2KEuzuN