KING OF PRUSSIA, Pa., Nov. 19, 2020 /PRNewswire/ -- CSL Behring, a global biotherapeutics leader, today announced survey results showing that a vast majority of HAE patients (94%) say it's important their preventive therapy specifically corrects C1 esterase inhibitor (C1-INH) deficiency. Both people living with Hereditary Angioedema (HAE) (94%) and the physicians who treat them (91%) agree that a reduction in the number of attacks is the leading factor when evaluating prophylactic therapy, followed closely by the importance of safety. The survey was conducted online by The Harris Poll and was sponsored by CSL Behring. 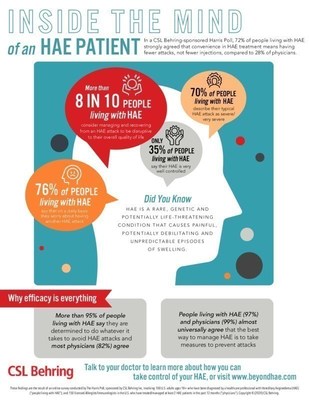 HAE is a rare, genetic and potentially life-threatening condition that causes painful, potentially debilitating and unpredictable episodes of swelling of the abdomen, larynx, face and extremities, among other areas of the body. HAE is caused by deficient or dysfunctional C1-INH, a protein in the blood that helps to control swelling.

"This data shows that those living with HAE and their physicians place importance on preventing more attacks, with most people living with HAE preferring a prophylactic treatment that is effective in reducing the number of attacks rather than a treatment that offers less frequent administration," said Jonathan A. Bernstein, M.D., Professor of Medicine, Department of Internal Medicine, Division of Immunology and Allergy Section, University of Cincinnati College of Medicine. "A treatment that may offer less frequent administration may seem appealing, but these findings suggest that many people living with HAE live with daily fear, stress and anxiety related to having an attack. These substantial burdens should be important points of consideration when discussing and developing treatment plans."

According to the survey findings, physicians do recognize the negative impact of HAE on virtually every aspect of their patients' lives, but the survey results also show that people living with HAE view the disease as having a more significant impact on their daily activities. For example, 43% of people living with HAE say the disease has a major negative impact on their work or studies, but only 9% of physicians say the same about their patients.

"HAE affects my life daily; with the concerns and stress of not only maintaining my own health as a patient, but also that of my children, both of whom also have HAE," said Cheryl French, a person living with HAE.

Other key findings include the following:

Impact of HAE on Lifestyle

About Hereditary Angioedema
A rare, genetic and potentially life-threatening condition, HAE causes painful, potentially debilitating and unpredictable episodes of swelling of the abdomen, larynx, face and extremities, among other areas of the body. HAE is one of two forms of bradykinin-mediated angioedema, the other being nonhereditary or acquired angioedema. HAE is caused by deficient or dysfunctional C1-INH, a protein in the blood that helps to control swelling. The defect with C1-INH lies within a person's genetic code, which is why HAE runs in families. HAE is classified as either type I, type II or n1-C1-INH (previously known as type III), which is HAE with normal C1-INH levels.

About the Survey
The survey was conducted online by The Harris Poll on behalf of CSL Behring between June 3 and July 7, 2020 among 100 U.S. adults ages 18+ who have been diagnosed by a healthcare professional with HAE ("people living with HAE"); and 150 licensed Allergists/Immunologists in the U.S. who have treated/managed at least two people living with HAE in the past 12 months ("physicians").

People living with HAE were identified and recruited directly by treating physicians. Pre-screened participants were provided a custom, password protected link and were invited to a secure website to be fully screened, and if qualified, to complete an online self-administered questionnaire via a personal device. Results were not weighted and are only representative of those who participated in the research.

Physicians were sampled from the online physician panel and invited to a secure website to be fully screened, and if qualified, to complete an online self-administered questionnaire via a personal device. Raw data for physicians were weighted by years in practice, gender and geographic region.

About CSL Behring
CSL Behring is a global biotherapeutics leader driven by its promise to save lives. Focused on serving patients' needs by using the latest technologies, the company develops and delivers innovative therapies that are used to treat coagulation disorders, primary immune deficiencies, hereditary angioedema, respiratory disease, and neurological disorders. The company's products are also used in cardiac surgery, burn treatment and to prevent hemolytic disease of the newborn.

CSL Behring operates one of the world's largest plasma collection networks, CSL Plasma. The parent company, CSL Limited (ASX:CSL;USOTC:CSLLY), headquartered in Melbourne, Australia, employs more than 27,000 people worldwide, and delivers its life-saving therapies to people in more than 100 countries. For inspiring stories about the promise of biotechnology, visit Vita at CSLBehring.com/vita and follow us on Twitter.com/CSLBehring.