Recipients Selected for the American Brain Foundation 2022 Cure One, Cure Many Award for the Early Diagnosis of Lewy Body Dementia

<span class="legendSpanClass">Join us for a free webinar</span> to celebrate the research and award recipients on February 21 at 8 p.m. ET.

MINNEAPOLIS, Feb. 7, 2022 /PRNewswire/ -- The American Brain Foundation is thrilled to announce the recipients of the 2022 Cure One, Cure Many Award for the early diagnosis of Lewy body dementia: Owen A. Ross, PhD, Pamela J. McLean, PhD, and Bradley F. Boeve, MD from Mayo Clinic. The major goal of the assembled team is to drive the development and validation of a blood-based biomarker to identify overt and prodromal dementia with Lewy bodies. 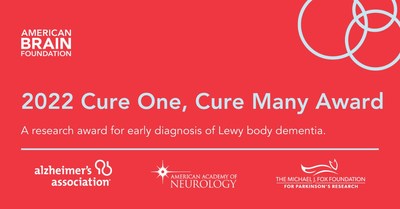 "This award to find a biomarker for LBD offers the hope that this will lead to an accurate method of diagnosing the disease and give patients and their loved ones clarity about the prognosis. This will also allow researchers to better study LBD and develop effective therapies," said Orly Avitzur, MD, MBA, FAAN, President of the American Academy of Neurology.

Currently, LBD can only be definitively diagnosed with a brain autopsy after death, so the need to identify a biomarker (an avenue for early diagnosis) is crucial. Former American Brain Foundation Board Vice Chair Susan Schneider Williams spearheaded this initiative in honor of her late husband, actor and comedian Robin Williams. She received the diagnosis of his Lewy body dementia after his death.

"If we'd had a diagnosis while my late husband Robin Williams was alive, it could have been a game-changer, full stop. This disease can progress very quickly, and without accurate diagnosis, too much time is lost in the chase. That was our experience," said Schneider Williams.

Schneider Williams recently completed her six-year term on the American Brain Foundation board of directors and will continue to support advocacy projects to help raise awareness and funds for LBD.

"There is an urgent need for simple, inexpensive, non-invasive, and easily available diagnostic tools for LBD, such as a blood test. Uncovering markers that distinguish one dementia from another will ultimately lead to a more accurate diagnosis and can help people living with the disease get the specific care and support they need," said Heather Snyder, PhD, Alzheimer's Association vice president of medical and scientific relations.

Senior Vice President of Research Resources at The Michael J. Fox Foundation, Jamie Eberling, PhD, reiterated the need and importance of partnership. "Cures for brain diseases such as LBD and Parkinson's will come only from collaboration. Biology and clinical experience cross diagnostic lines, and the outcome of this awarded project will have impact in broader research," said Eberling.

These partnerships highlight the interconnectedness of brain diseases as well as the American Brain Foundation's effort to create awareness that when we cure one brain disease, we will cure many. LBD and other neurodegenerative diseases like Alzheimer's and Parkinson's disease share many similarities in presentation and symptoms. As a result, they are often mistaken for one another, which hinders diagnosis, treatment, and research. Investigations into LBD could have implications for other brain diseases like Alzheimer's and Parkinson's.

"The American Brain Foundation promotes and invests in research across the whole spectrum of brain diseases and disorders in the belief that when we find a cure for one brain disease, we will find cures for many. Our holistic approach focuses on building bridges between different brain diseases to break new ground in both research and application," said Jane Ransom, the Foundation's executive director.

The award recipients have extensive experience in Lewy body disorders and have assembled a team of experts across a range of disciplines. They have taken a multipronged approach to support the diagnosis of Lewy body dementia by employing protein biomarkers, extracellular vesicles, and seed aggregation assays. Investigators at Mayo Clinic are joined by colleagues at the University of Pennsylvania (Dr. David Issadore) and the University of North Texas Health Science Center (Dr. Sid O'Bryant). The data generated will be combined with a vast amount of clinical, imaging, and pathologic data available to the investigators, and machine learning approaches will be used to create a unified diagnostic model.

"We have taken a coordinated team approach to the development, validation, and acceleration of DLB-related biomarkers and believe an early and accurate diagnosis is critical to tackling this disease," said Dr. Ross, research team lead.

You can hear directly from Dr. Ross and others during our free webinar on February 21 at 8 p.m. ET. During the event, you'll hear about ongoing research and the impact the 2022 Cure One, Cure Many Award will have on people who experience Lewy body dementia.

Register for the webinar, donate to the research fund, or learn more about the Cure One, Cure Many Award here.