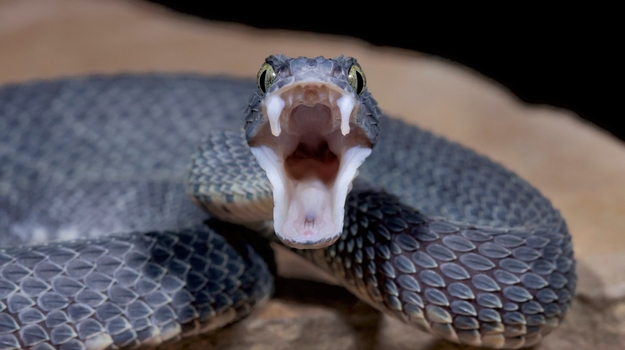 Researchers at UT Southwestern Medical Center recently discovered the use of snake venom to uncover the detailed shape of a critical protein in muscle contraction. The report, published in Neuron, reveals these findings may help lead to improved understanding of congenital myasthenic syndromes (CMS), a genetic muscle-weakening condition.

The protein, called a nicotinic receptor, has been a challenge to study since it sits in the cell’s membrane.

The nicotinic receptor is a protein that sits on the surface of nerve cells that connect to muscles and is a vital part of neuronal communication, telling the muscle cells to contract after instructions are sent through the spinal cord.

"The nicotinic receptor at the neuromuscular junction has been a target of interest for over a century. It was the first ion channel to be purified, the first to have its genes cloned, and the first to be imaged by an electron microscope," said Ryan Hibbs, Ph.D., associate professor of Neuroscience and Biophysics at UTSW and a corresponding author of the study.

There have been many attempts to identify the receptor's structure with little success. In the past, groups have used x-ray crystallography and cryogenic electron microscopy (cryo-EM), both used to determine molecular structures. However, they were only able to get low-resolution images, according to Hibbs. Additionally, proteins that sit in the membranes don't usually crystallize well using the x-ray crystallography.

"This never could have been done using X-ray crystallography – hundreds of researchers had attempted it. The new microscopes allowed us to get to a very high resolution near the atomic level. At that resolution, we can precisely make out the positions of most of more than 2,000 amino acids that make up the receptor protein," Hibbs said.

The results of the study showed that the toxin in the venom blocks acetylcholine by competing for the same binding site. This paralyzes the receptor closed and prevents the flow of electrochemical messages.

"The results were stunning. They revealed, at a very fine level of detail, the 3D architecture of the receptor, with two toxin molecules bound to it exactly where we know the much smaller acetylcholine binds,” Hibbs said.

They also found through the structure the reason why the toxin binds so tightly and selectively to the receptor and it how venom causes paralysis.

"We learned a tremendous amount from the new 3D structure beyond how the toxin works to poison the receptor," Hibbs said.