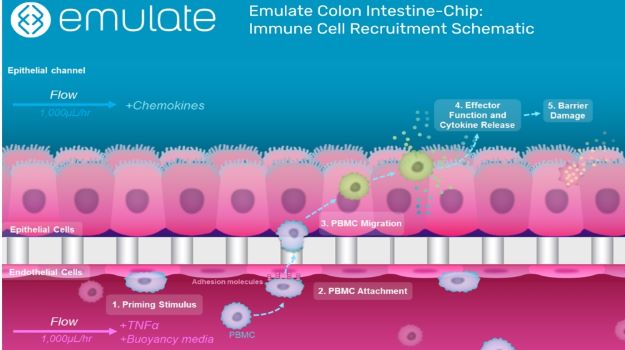 The Colon Intestine-Chip: Immune Cell Recruitment assay by organ-on-a-chip developer Emulate Inc. is the only human-based research tool to model colon and inflammation-specific immune recruitment and downstream effects. This makes it particularly relevant for drug developers needing insights into the mechanism of action for inflammatory bowel disease (IBD). It is scheduled for commercial release this June, after two years of development and extensive validation.

“Our goal has been to develop a complete model that reflects all the complexities, and thus facilitate therapy development and accelerate the movement of drug candidates to the successful completion of clinical trials,” Christopher Carman, Ph.D., director of immunology at Emulate, told BioSpace.

This makes it possible for drug developers to more accurately predict the therapeutic efficacy of pharmaceutical candidates being developed to treat IBD.

“The fundamental gap has been around developing advanced, more complete in vitro models that recapitulate the human physiology in a more complex manner than traditional models,” he said.

Traditionally, animal models have been used to understand IBD and other conditions, but “there are species-specific issues and more than 50 different models,” he pointed out, and results from animal tests translate imperfectly to humans.

In vitro models have fallen short, too. They feature only a few cell types and lack mechanical inputs, such as gut stretching and relaxation in the peristaltic moment. Both are limiting, and Carman said, “Mechanical inputs are as important as the biological inputs in terms of differentiating the physiological structure.”

“These colon tissues contain the rich stem cells needed to differentiate healthy multilineage tissue of the intestinal epithelium, and are co-cultured with microvascular endothelial cells,” he said.

Because the cells are allowed to co-differentiate in a dynamic environment, they send and receive complex cues from other cells and are subject to fluid shear forces and stretching. As Carman pointed out, “Our research demonstrated that these organoids recapitulated human physiology at a level unparalleled by related models (such as conventional cell cultures).”

For example, in the Colon Intestine-Chip, “All the relevant cell sub-types of the epithelium are present, and are there in the right proportions and morphology.” This includes functional readouts for secretions of mucus, formations of microvilli (which aid absorption and secretion), protein transcription, vascularization and other factors, so the model closely mimics the tissue and conditions found in the human body.

As a result, “We have a healthy resting state that looks a lot like a human’s,” Carman said. “We want to use this as a starting point for clients that are developing therapies for IBD, such as ulcerative colitis, Crohn’s disease and celiac disease.”

The model has been validated against clinically relevant IBD therapies to demonstrate efficacy and mechanism of action so biotech companies and large pharmaceutical developers can gain more accurate insights into the therapeutics they are developing and achieve a higher success rate for the IBD drugs in their pipelines.

The model can be accessed through Emulate’s contract research services or supplied directly to clients as Colon Intestine-Chip Bio-Kits, which include blank Organ-Chips and colon cells that have been validated in-house.

“The kits can be passaged substantially,” Carman said, so they can be used for multiple passages and remain viable for months.

“We’ve tested three different therapeutics that are clinically relevant to IBD, from three different classes of therapeutics (including monoclonal antibodies, corticosteroids and small molecule α4‐integrin antagonists) and complementary mechanisms of action using our Colon Intestine-Chip,” Carman said. “They all nicely reflected expectations regarding in vivo outcomes and mechanism of action.” Now Emulate is validating the model with AGM300, a small molecular inhibitor that is in clinical trials.

Emulate develops a range of models that reflect the tissue and conditions of multiple parts of the human body. Its work with the colon and intestine is the result of what Carman calls “an enormous unmet need in IBD, specifically.”

IBD is a complex disease characterized by uncontrolled activation of intestinal immune cells that create a pro-inflammatory cytokine loop that leads to chronic intestinal inflammation. Because it damages the intestinal barrier, Carman said “IBD ultimately culminates in barrier leak in the intestine, which allows bacteria to access and thrive in place they never should be,” thus increasing the risk of fibrosis, cancer or other serious conditions. Incidence is increasing in the U.S. and globally. “Only about half the IBD patients respond to existing therapies, and two-thirds of those fail to ever enter remission,” Carman added.

“By capturing primary human disease complexities, we have a model system that reflects the primary human responses and mechanisms of action involved in IBD more accurately than other systems,” he said. That should improve the success rates and, therefore, decrease the attrition of therapies as they move from preclinical to clinical phases of research.