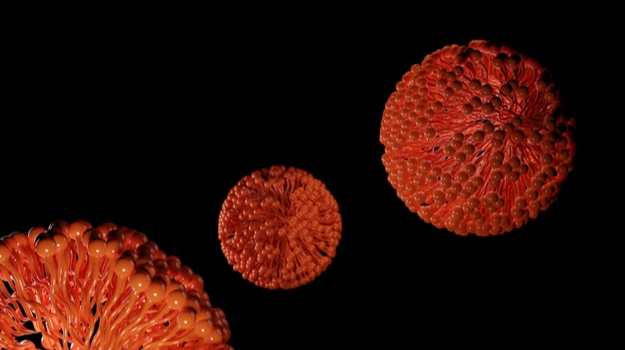 At the University of Southern California and the Lawrence J. Ellison Institute for Transformative Medicine, Dr. Eun Ji Chung and Dr. Mitchell Gross are tackling cancer at the nano-scale. In their paper, recently published in the Journal of Controlled Release, the team of researchers developed a nanotherapeutic micelle to specifically target cancerous tumors.

“As a cancer researcher and physician, there are a lot of unmet needs,” Gross said. “One of the main unmet needs, which is especially addressed here, is this old problem of cancer metastasis and cancer spread. Cancers themselves can be dangerous, but they really get dangerous and life-threatening when they spread outside the tissue of origin.”

While conventional chemotherapeutic drugs are taken in large doses, and must be taken repeatedly, this nanotherapeutic micelle is especially designed to be small and efficient. The micelle, which resembles a nano-sized sphere, is labeled with the monocyte chemoattractant protein-1 (MCP-1) chemokine on its surface. MCP-1 is attracted to the chemokine receptor 2 (CCR2), both of which are highly expressed within tumors to promote disease progression.

When designing this nanotherapeutic micelle, Dr. Chung’s research group asked a few key questions. “Can we deliver a nanoparticle that can target and bind to that receptor, and hence, deliver a drug that can be more directed to the disease site?” she muses. “Can we target not only the tumor better, but also other aspects that contribute to tumorigenesis and progression – like the lymph nodes?”

Beyond the actual tumor, the secretion of MCP-1 and its interaction with CCR2 can lead to the gathering of tumor-associated macrophages – or cell populations that suppress the body’s innate immune response against cancer. Thus, by labelling the micelle with the MCP-1 peptide, the micelle would bind specifically to cancerous cells while simultaneously inhibiting the encroachment of these tumor associated macrophages. Now, without interference by these cancer-associated immune cell populations, the endogenous immune system could potentially mount a more effective response against the tumor itself.

The micelle also contains a drug, named KLAKKLAK, that is cytotoxic to cancer cells. By encapsulating this small molecule drug inside the micelle, the micelle is trafficked to the cancer site of interest and can deposit its drug payload appropriately – thus minimizing cytotoxicity to healthy cells.

“We can minimize off target effects and allow for the nanoparticle, the carrier, to act just like an Amazon package mailed to an address of interest,” Chung said.

When testing the micelle in vivo, Chung and Gross were surprised to find that instead of being retained at the tumor site, the micelles were rather distributed heavily at the liver and lymph nodes. Despite this finding, the nanotherapeutic micelle significantly reduced the tumor volume. Furthermore, the micelle led to an increase in the infiltration of cytotoxic T- lymphocytes to the tumor, which indicated stimulation of the endogenous immune response to enhance therapeutic efficiency.

“The lymph nodes are sort of like a filter, sort of a sentinel – a lymphatic monitor for the body. Any sort of strategy to be able to tinker with that, to try to promote anti-cancer immunity at the level of the lymph node, would be very attractive,” Gross said. “This was kind of a really interesting side effect of this project.”

Chung elaborated further on this finding by hypothesizing that the micelles potentially bind to the tumor associated macrophages in circulation and in the lymph nodes – thus keeping them from being recruited to the tumor tissue.

Looking forward, the researchers anticipate applying this idea of peptide-based targeting to design micelles against other types of cancers.

“I think that this is the sort of beauty and power behind this,” Chung said. “There are lots of different and creative ways that people actually use to target specific cancers.”

Furthermore, there are different amounts of CCR2 expression in different types of cancer, and the micelle has been shown to increase its anti-cancer effectiveness with increased CCR2 expression.

“In that way, you can think about this for personalized medicine,” Chung said. “We can use this for precise targeting in CCR2 high-expressing patients.”

But first, they’ll continue looking at the lymph nodes. “We’ll try to understand why it’s targeting the lymph nodes so well,” Chung said.  “It’s sort of this unique and interesting finding that we are excited about, because that’s what science does. We thought that it was going to do one thing and then it did something else.”