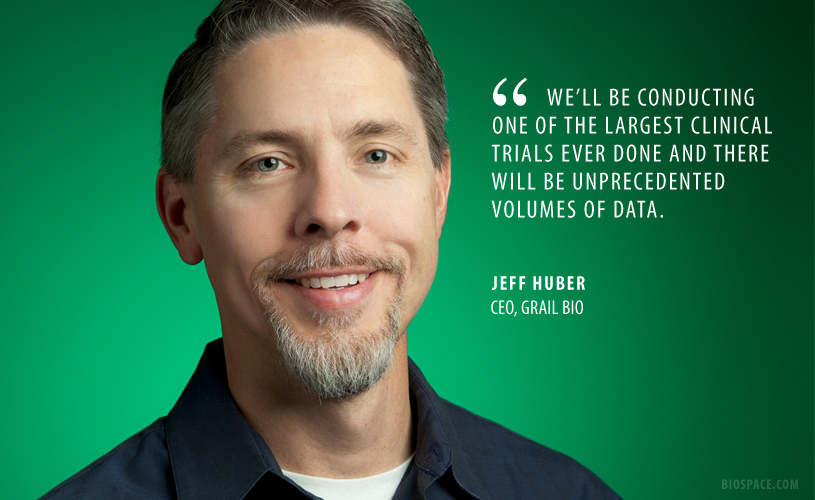 SAN FRANCISCO – Taking on cancer is a deeply personal mission for Jeff Huber, the new chief executive officer of Grail, a one-month-old spinout of San Diego-based Illumina that is focused on using diagnostics to develop early-stage cancer detection.

Huber was announced CEO three months to the day following the death of his wife, Laura, to colon cancer. Laura Huber was diagnosed with stage 4 colon cancer 18 months before her death. Because her cancer was not discovered until the disease had progressed to such a late stage, Huber likened the diagnosis to a death sentence for his wife. Huber will attempt to harness the pain of his loss to drive the company to create early cancer screening technology.

“Cancer is something that touches most every family, which is what makes this effort so important,” Huber told BioSpace in an exclusive interview. “The mission we have is to save lives. I want to spare people the kind of cancer experience Laura had to endure.”

Huber said current diagnostics technology is not designed for early identification of cancer markers in patients who have no family history or contributing risk factors. He said Grail’s mission is to develop tests that will allow physicians to detect cancer early enough for successful treatment. Treatments currently available for cancers caught in early stages have an 80 to 90 percent positive outcome, he said.

“As it happens, far too often cancer is caught late, which often means a poor prognosis,” Huber said. “We look forward to being able to develop the test that detects cancer early.”

Grail launched in January with the idea of creating a “pan-cancer” screening test that could diagnose any cancer at an early stage prior to symptoms. The technology measures circulating nucleic acids in blood, which Huber said provides a greater opportunity to detect cancers early as opposed to searching for cancer biomarkers. Finding cancer biomarkers is complicated due to the complexity of cancer cells, which can rapidly mutate.

Researchers have been looking for antigen and protein expressions of cancer cells, but Huber said the efforts have largely been unsuccessful due to the complexity of the diseases. Huber said he and his team are optimistic that measuring circulating nucleic acids in the blood will not only allow them to identify cancers early on, but prevent the spread of the disease by providing physicians with early enough discovery to enable them to select the best course of precision medicine treatment for patients.

“You’ll soon see more and more personalized cancer treatments that will be able to be helped from the blood testing we’re developing,” Huber said.

Before taking over at Grail, Huber previously served two years as a senior vice president at Google X, the company’s life sciences division with a focus on big data analytics. In addition to his work with Google X, Huber led development of Google’s advertising products and Google Apps, and ran Google’s Geo division, including Google Maps and Google Earth. Before Google, he led the development of large-scale systems at eBay and Excite@Home.

Tackling Grail’s diagnostics goal will require a big pool of data and clinical trials that include large numbers of patients, but Huber said he’s up for the challenge.

“We’ll be conducting one of the largest clinical trials ever done and there will be unprecedented volumes of data,” Huber said. “I’m pretty comfortable on the big data and schematics side. I embrace these big data challenges.”

Grail launched with $100 million in financing, which will provide the company with the necessary capital to drive its research as well as hire about 100 researchers and employees to support the company’s plans.

“We’re tackling something that touches every life, so we want to ensure we have the best people around working on this,” Huber said.

Grail hopes to start a large-scale clinical trial in 2017. It also plans to have a single-cancer test available in 2017 as well, with the possibility of the pan-cancer test being on the market in 2019.