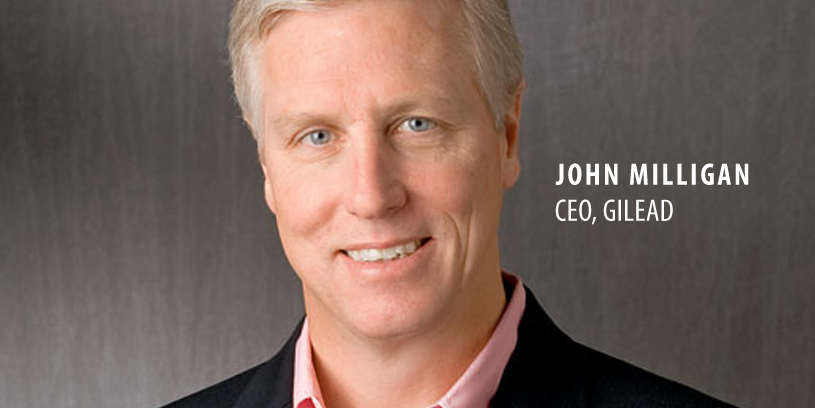 Since John Martin is stepping down as chief executive officer of Foster City, Calif.-based Gilead Sciences, Inc. on Mar. 10, 2016, to be replaced by John Milligan, analysts are speculating on whether Milligan will change the company’s focus and strategy.

The company announced that Martin would step down as chief executive officer and take on the job of executive chairman on Jan. 29. John Milligan, currently president and chief operating officer, will step up to become chief executive officer and join Gilead’s board of directors. The question on analysts and investors' minds is if Milligan will push the company away from its core HIV and hepatitis C drugs, and whether it will do so through mergers and acquisitions.

At a recent fourth-quarter earnings conference call, Milligan said, “I will continue to work hard to help Gilead’s business grow beyond antivirals and into new therapeutic areas for the betterment of patients.”

That would certainly suggest he is looking to expand into other areas. Although those indications are the company’s bread and butter, responsible for $30.2 billion of Gilead’s $32.1 billion annual revenue, there is a lot of competition out there. The Motley Fool cites ViiV Healthcare for the HIV market, AbbVie and Johnson & Johnson for the hepatitis C market, as emerging competitors.

One area some analysts suspect Gilead will try to penetrate is oncology, even though to date its market presence there has been disappointing. The company’s first oncology drug, Zydelig, generated only $132 million last year. Todd Campbell, writing for The Motley Fool, notes that AbbVie launched a similar drug, Imbruvica, at about the same time for chronic lymphoblastic leukemia (CLL), and has generated over $1 billion to date.

Gilead is trying to expand Zydelig for other cancers, and has some potential kinase inhibitors in its pipeline. Still, Campbell says, “a deal may be necessary if the company really wants to be a big player in this huge and growing market.”

One other problem Gilead has, and although it’s a wonderful problem for society, it’s not so great for the company—is its hepatitis C drugs, Harvoni and Sovaldi, essentially “cure” patients of hepatitis C infections. As a result, although no one talks of wiping out hepatitis C, it does seem clear that with drugs that effective, the market for it keeps shrinking. Gilead has indicated it expects its hepatitis C sales will drop this year to between $30 billion and $31 billion, which is a lot of money, but lower than before.

Campbell says, “While Gilead Sciences’ management is famous for sandbagging results to rein in analyst expectations, it’s likely that its track record of double-digit top-line sales growth ended in 2015.”

And one way for companies to increase revenue is to buy other companies. And Milligan said at the conference, “We’re very interested in acquiring assets through partnerships or potentially acquisition that could help us grow in those areas. And with the tripling of our revenue over the last few years, the need to do so sooner rather than later is heightened.”

Gilead has plenty to work with, should it go the merger-and-acquisition route. It had $26.2 billion in cash, cash equivalents and marketable securities at the end of December.

Two other areas Gilead has a presence in are cardiovascular and inflammation. The FDA recently approved Letairis in combination with tadalafil for treatment of pulmonary arterial hypertension (PAH). And Gilead and Galapagos NV inked a collaboration deal for the commercialization of the JAK1-selective inhibitor filgotinib for inflammatory diseases, such as rheumatoid arthritis and Crohn’s disease.