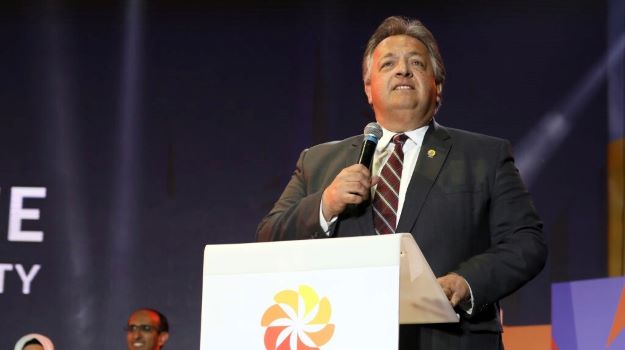 Noubar Afeyan, founder of Flagship Pioneering, spoke at an event hosted by the Institute of Global Health Innovation. In addition to co-founding Moderna, Afeyan has co-founded more than 80 life science and technology start-ups and holds more than 100 patents.

Afeyan launched his talk by saying, “The way the world thinks about innovation is by placing bets and judging which innovations are going to work, and then discarding the ones that don’t have potential. Most breakthrough innovations are discarded early on. We ask experts to judge these innovations in their earliest form — but is there another way to think about this?”

His talk focused on Moderna, which has one of the most successful COVID-19 vaccines on the market - its sole product - and is an innovator in messenger RNA (mRNA) technologies.

Afeyan noted that Moderna was able to design its vaccine within two days after receiving the gene sequence of SARS-CoV-2, the virus that causes COVID-19. “When COVID-19 happened, a lot of the underlying science and platform investment already developed was directed overnight to making a vaccine against an unknown virus. What we learned from this is that if you can get on the playing field, if you have a solution that is even 10% good, you can improve it.”

Flagship Pioneering is careful not to describe itself as a venture capital firm. It, and Afeyan, distinguish themselves from a typical VC firm because VCs primarily make investments, while Flagship is a life science company that starts and runs companies. Or as Wailin Wong, host of “The Indicator from Planet Money,” noted in a recent interview with Afeyan and Jacob Goldstein, former host of Planet Money and now a host of a podcast called “What’s Your Problem,” “He imagined a company that would stand in direct opposition to the cult of the entrepreneur. So 20 years ago, he started a company that starts other companies.”

In January of this year, Afeyan published Flagship’s 2022 Annual Letter, and in it, he outlined the top four forces shaping the future of biotech. They are: programmable medicines and digital biology; biology and AI; biotech business environment and the hunt for value; and a post-pandemic regulatory reset.

Part of Afeyan’s thinking can be seen when he noted, “Scientists have created new tools to perturb biology more directly and deliberately. As a result, we can start to think of drugs as instructions or programs that have predictable outcomes and vice versa, we can envision an outcome, and then design the right program to achieve it.”

That is certainly the case with Moderna, but Moderna is only one of the dozens of companies he has been involved in launching. Others include Generate Bio, Foghorn Therapeutics, Tessera Therapeutics, Laronde, Indigo Agriculture, Ring Therapeutics, Denali Therapeutics, Sana Biotechnology, Codiak BioSciences, Rubius Therapeutics and many others.

Afeyan now predicts that immunology will see “large advances” in the upcoming years because “COVID-19 taught us how little we know about the immune system.”

And in keeping with his fourth force shaping the future, he said he looks forward to where health and medicine are viewed in a preemptive, not reactionary way in his most recent talk. “We do very little upstream medicine because it isn’t rewarded,” he said. “If we can catch disease early and delay it, at a minimum, we could have a lot more impact at a lot less cost.”

In speaking with Planet Money, Afeyan emphasized the importance of entrepreneurship by being open-minded and listening and taking things one incremental step at a time.

“One of the things that I knew literally on day one going into creating this whole thing in 2000 was that people hang on to their ideas and emotionally, almost romantically, connect to them, and they never can kill them. And I wanted to create a safe zone during which the question was, what is the falsifying experiments that will kill the hypothesis so that we don’t go forward. Well, guess what? If you give something a name - worse yet, a name you really like - your pet dog’s name, some, you know, Greek god’s name, whatever - well, you try to kill it, right?”

So they encouraged companies to provide a number instead of a name because it’s disposable or easier to kill. In its approach, Flagship gives what Goldstein described as a “disposable proto-company” a few million dollars to test the hypothesis to determine if it has what it takes to be a full-blown company.

Afeyan noted, “We needed to convince ourselves that we can actually make things and try them in animals and have them make a protein. You know, this notion that now we go around saying, mRNA is the code of life, and we can put it in, and we can make any protein we want — yeah, $2 billion later, we could do that. But on the early days, nobody had shown that you could actually make the correct protein, fold it the correct way in animal models, not humans yet. And we need to convince ourselves of that.”

Moderna, for example, had a long list of diseases it thought it could treat using mRNA — it still does — but the low-hanging fruit was infectious diseases. So they developed a flu vaccine back in 2014 as a proof-of-concept for the technology. And it took quite a number of years and a huge inciting incident — the COVID-19 pandemic — and a lot of cash to push that into a marketable product.