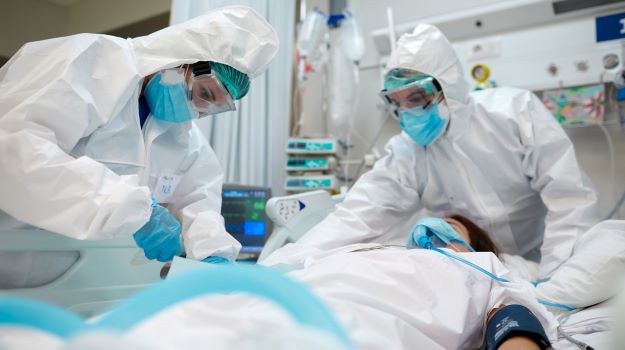 Newly-announced findings from a Phase III trial conducted by late-stage biotechnology company CytoDyn indicate that the use of Vyrologix™ (leronlimab), the company’s CCR5 antagonist candidate, was safe and improved the survival rate in critically ill hospitalized patients with coronavirus disease 2019 (COVID-19).

Additionally, treatment with Vyrologix led to a faster hospital discharge in these patients.

Data from the trial were reported to the U.S. Food and Drug Administration (FDA), the U.K.’s Medicines & Healthcare product Regulatory Agency and Health Canada in an effort to identify next steps toward approval of Vyrologix for the indication of COVID-19 in patients with severe disease.

As of yet, the findings from the late-stage trial have not been published, but CytoDyn said it is preparing a manuscript of the study data to submit to one or more major journals.

Last year, data showed that Vyrologix, which was originally developed for HIV, normalized the immune response in critically ill patients with COVID-19.

CytoDyn’s new Phase III investigative trial found that treatment with 700 mg Vyrologix resulted in a 24% reduction in the primary endpoint of all-cause mortality versus treatment with placebo. There was also a significantly shorter average length of hospital stay in the Vyrologix arm versus the placebo arm, with patients in the Vyrologix group having their hospital day shortened by six days.

Also, patients who received Vyrologix in this U.S. trial had a 166% better improvement in their probability of being discharged alive by day 28. Approximately 28% in the Vyrologix arm and 11% of patients in the placebo group met this secondary endpoint.

A total of 62 out of the 384 patients enrolled in CytoDyn’s study were considered critically ill, which the company suggests is too small a number relative to the overall trial size to make a firm conclusion of the therapy’s efficacy in this population.

To reach a better conclusion of the effects of Vyrologix in critically ill patients, CytoDyn has filed an additional protocol with the FDA to enroll more patients with severe disease at the existing trial sites. So far, CytoDyn says it has enrolled up to 45 patients through the open-label arm of the study and is also working with regulators from other countries to accelerate the enrollment process.

“The CD12 trial results are very promising and leronlimab may be the only safe medication to help critically ill patients,” said the Medical Direction of the Mount Sinai Lung Transplantation Program, Harish Seethamraju, M.D., in a statement.

Chairman and Chief Medical Officer of CytoDyn, Scott A. Kelly, M.D., added, “We believe this further supports CCR5 as a therapeutic target for immunomodulation and the importance of the disruption of the CCL5-CCR5 axis via leronlimab-mediated CCR5 blockade of pro-inflammatory leukocytes and reversal of the cytokine storm in critical COVID-19 patients.”

“Today, there are no approved drugs to effectively address the unmet medical need for critically ill COVID-19 patients,” said CytoDyn’s President and Chief Executive Officer Nader Pourhassan, Ph.D. “Our CD12 study demonstrates leronlimab is particularly effective in treating this patient population. We believe these results are the best results ever achieved for this population in a Phase 3 clinical trial.”

Pourhassan added that the company is currently organizing with regulators in the U.S. and abroad to expedite the approval of leronlimab for the treatment of COVID-19.