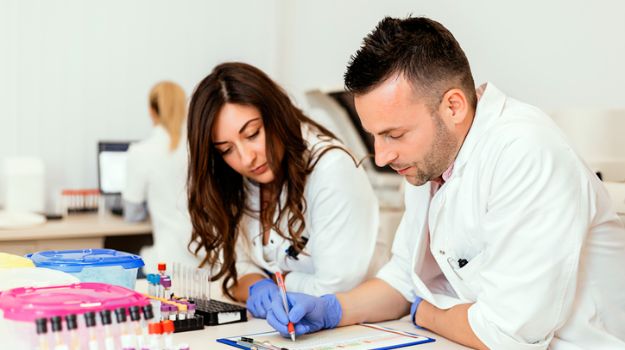 It was a particularly busy week for clinical trial announcements. Let's take a look.

aptaTargets dosed the first patient in the Phase Ib trial of ApTOLL for COVID-19. ApTOLL is a novel single-stranded DNA molecule with immunomodulator and anti-inflammatory effect.

Adagio Therapeutics announced that its Phase II/III trials evaluating adintrevimab as pre-and-post-exposure prophylaxis (EVADE) and treatment (STAMP) for COVID-19 hit the primary endpoints. Adintevimab is a potent, broadly neutralizing antibody against SARS-CoV-2. Administered intramuscularly, it had a similar safety profile to a placebo. The company expects to submit to the U.S. Food and Drug Administration for an Emergency Use Authorization (EUA) soon.

CureVac and GlaxoSmithKline dosed the first patient in a Phase I trial of CV2CoV, their second-generation mRNA vaccine candidate against COVID-19. They hope the data can be applied to figure vaccines against COVID-19 variants and other pathogens.

CytoDyn announced the FDA placed a partial hold on its HIV program and a full clinical hold on its COVID-19 program in the U.S. CytoDyn did not release the reasons behind the clinical holds. The company also decided to pause its COVID-19 trials in Brazil until after analysis by an independent Data Monitoring Committee. Leronlimab is a humanized IgG4 monoclonal antibody that binds to the CCR5 receptor on certain immune cells. CCR5 is associated with a number of diseases, including infectious diseases such as HIV, cancer, and autoimmune disorders.

Pfizer and BioNTech published trial data of their COVID-19 vaccine in children aged 5 to 11. The enrollment period was from July 1, 2021, to February 17, 2022, and included patients and controls at 31 hospitals in 23 states. Although the vaccine with a two-dose regimen wasn’t quite as effective against the Omicron variant as it was against the Delta and wildtype variant, the “vaccination prevented most life-threatening COVID-19 in both periods. Vaccination also reduced the risk of hospitalization for COVID-19 among children 5 to 11 years of age by two-thirds during the Omicron period, and most children with critical COVID-19 were unvaccinated.”

Merck and Ridgeback Biotherapeutics announced they will be presenting data on the drug from its Phase III MOVe-OUT trial, which compared Legevrio to placebo against COVID-19 in non-hospitalized adults with mild to moderate COVID-19 at high risk of disease progression. In patients who tested positive at baseline and whose post-baseline infectivity data were available, the drug demonstrated rapid elimination of the virus compared to placebo. On the third day of treatment, in infected patients, SARS-CoV-2 was detected in 0.0% of patients who received the drug compared to 21.8% in the placebo group. Further, on the fifth day, the Lagebrio arm was positive 0.0% compared to 2.2% in the placebo arm. On Day 10, the virus was not detected in either arm. From Days 3 through 10, molnupiravir was linked with greater mean decreases from baseline in SARS-CoV-2 RNA compared to placebo. However, they had comparable rates of viral RNA clearance through Day 29.

ARCA biopharma announced results from its Phase IIb ASPEN-COVID-19 trial of rNAPc2 for hospitalized COVID-19 patients. Although both doses of the drug demonstrated a treatment benefit, neither hit statistical significance for the primary efficacy endpoint of change in D-dimer level from Baseline to Day 8 compared to standard of care heparin. The drug is a potent and specific inhibitor of tissue factors.

Prothena announced the FDA had cleared its IND for PRX012 for Alzheimer’s disease. The Phase I ascending dose study will start around mid-year. The drug is a potential best-in-class anti-amyloid beta antibody.

Janssen initiated VISIBLE, a first-of-its-kind, large-scale prospective study of Tremfya (guselkumab) in people of color to generate additional data and insights about disease burden and the psoriatic disease journey in this population. It is a Phase IIIb study in participants with moderate to severe plaque psoriasis and/or moderate to severe scalp psoriasis in patients who self-identify as non-white. Janssen also announced Tremfya provided a consistent, high degree of durable skin clearance through five years in adults across broad subpopulations with moderate to severe plaque psoriasis in the Phase III VOYAGE 1 and 2 trials.

Biogen and Ionis Pharmaceuticals released topline data from the Phase I trial of BIIB078 for people with C9orf72-associated amyotrophic lateral sclerosis (ALS). The drug is an antisense oligonucleotide (ASO). The drug was generally well-tolerated. The drug did not meet any secondary efficacy endpoints and did not demonstrate clinical benefit. They are discontinuing the program.

Aslan Pharmaceuticals presented data from the completed Phase Ib study of eblasakimab in moderate-to-severe atopic dermatitis. Eblasakimab is a potential first-in-class monoclonal antibody against IL-13 receptor alpha1 subunit, one of the components of the Type 2 receptor.

Aristea Therapeutics dosed the first patient in its Phase IIb trial of RIST4721 in palmoplantar pustulosis. The drug is a CXCR2 antagonist.

Pipeline Therapeutics received the greenlight from the FDA to initiate a Phase Ib/IIa trial of PIPE-307 in patients with r/r multiple sclerosis. PIPE-307 is an oral, highly selective antagonist of the muscarinic M1 receptor.

Alzamend Neuro received the full data set from its Phase I trial for AL001 for Alzheimer’s disease. The data will establish doses for a planned Phase II multiple ascending dose study. AL001 is a novel lithium-delivery system, a lithium-salicylate-L-proline engineered ionic cocrystal.

Provention Bio announced positive results from the final analysis of its first-in-human PROVENT study of PRV-101 for all key Coxsackievirus B (CVB) strains associated with type 1 diabetes autoimmunity. It is being developed for the prevention of acute CVB infection as well as for potential delay or prevention of autoimmune disorders T1D and celiac disease.

Neuroplast enrolled the first patient in its Phase II trial of Neuro-Cells® for acute Traumatic Spinal Cord Injury (TSCI). It is being run in collaboration with Hospital Nacional de Paraplejicos in Toledo, Spain. Neuro-Cells® contains non-substantially manipulated bone marrow-derived hematopoietic and mesenchymal stem cells. They are generated from a patient’s own bone marrow, meaning the donor and recipient are the same person. They remove inflammatory inducing components and pathogens during the production process.

Aldeyra Therapeutics announced three clinical trials of ADX-629, its first-in-class oral RASP modulator. The first announcement related to topline data from a Phase II proof-of-concept trial of the drug for psoriasis. They reported results in 10 patients with moderate psoriasis who received the drug. At 12 weeks, psoriasis area and severity index (PASI) scores demonstrated statistically significant drops compared to baseline and peak PASI 50% and PASI 75% responder percentages of 57% and 25%, respectively. Global assessment scores by investigators also decreased during the length of treatment. Analysis of lesional pan-gene expression suggested a trend toward normalization of global gene expression patterns. They also reported results from a placebo-controlled crossover trial of the drug in eight patients with mild asthma for seven days. The patient’s asthma symptom scores and sputum eosinophil cell counts dropped after receiving the drug compared to placebo, at least numerically. And compared to placebo, patients with ADX-629 demonstrated statistically significant decreases in plasma levels of IL-5 and TNF alpha, both pro-inflammatory cytokines. They also reported numerical decreases in malondialdehyde in the plasma. And finally, they are reporting on a study of 11 patients with mild to moderate COVID-19 who received ADX-629 or placebo for four weeks. The patients receiving the drug reported a change from baseline in the National Institute of Allergy and Infectious Diseases Score (NIAID) that was numerically higher than in the placebo cohort. The NIAID score of 1 equals death, and 8 equals no activity limitation. They also observed decreases in plasma levels of the cytokines CXCL9, IFN gamma and TNF alpha.

Pfizer reported positive topline data from its Phase III ELEVATE UC 52 study of etrasimod for ulcerative colitis. The primary endpoint was safety and efficacy of the drug on clinical remission at both week 12 and 52. The drug is a selective sphingosine 1-phosphate (S1P) receptor modulator.

Sangamo Therapeutics dosed the first patient in the Phase I/II STEADFAST trial of TX200 for the prevention of immune-mediated rejection in HLA-A2 mismatched kidney transplantation from a living donor. The therapy is an autologous CAR-Treg cell therapy product.

VectivBio presented new clinical data from a Phase I study of apraglutide for short bowel syndrome with intestinal failure (SBS-IF) patients with impaired renal function. The drug is a next-generation, long-acting GLP-2 analog.

Genentech reported its Phase III SKYSCRAPER-02 study of tiragolumab and Tecentriq (atezolizumab) with chemotherapy as first-line treatment for people diagnosed with extensive-stage small cell lung cancer (ES-SCLC) did not hit the co-primary endpoint, PFS, in the interim data. Tiragolumab is a TIGIT-targeting checkpoint inhibitor. Tecentriq is an anti-PD-1 and anti-PD-L1 checkpoint inhibitor.

Biogen submitted its final study protocol for the Phase IV ENVISION trial of Aduhelm (aducanumab) for Alzheimer’s disease. The trial is part of a post-marketing requirement and its accelerated approval. The drug is a monoclonal antibody against amyloid-beta and was approved in June 2021.

Revelation Biosciences announced results from the interim analysis of its Phase IIb viral challenge study of its intranasal REVTx-99a for the prevention of H3N2 influenza (A) in healthy people. The data showed it did not meet its primary endpoint, the area under the curve of viral load by quantitative RT-PCR from nasopharyngeal swabs.

Recce Pharma announced positive safety data from the fourth cohort of its Phase I trial of RECCE 327. The drug is an IV and topical therapy being developed for life-threatening infections from Gram-positive and Gram-negative bacteria, including their “superbug forms.”

ReAlta Life Sciences indicated the FDA and cleared its IND application for a Phase II trial of RLS-0071 in neonates with hypoxic-ischemic encephalopathy. The drug is a dual action complement inhibitor and innate anti-inflammatory peptide.

Antios Therapeutics reported new data from the Phase Ib and IIa trials of ATI-2173 for hepatitis B virus. The drug is an Active Site Polymerase Inhibitor Nucleotide (ASPIN). The drug alone and in combination with tenofovir disoproxil fumarate was well tolerated and suppressed HBV DNA.

HMNC Brain Health and Develco Pharma announced promising early results in treatment-resistant depression from its Phase II trial of ketamine. KET-1 is an oral prolonged-release formulation of ketamine. The trial suggested a positive trend in efficacy based on primary endpoint clinical data.

Longeveron published results from a Phase I trial of Lomecel-B in mild Alzheimer’s. The trial met the primary endpoint, showing it was well tolerated. Lomecel-B is derived from culture-expanded medicinal signaling cells from the bone marrow of young, healthy adult donors.

Cerevance reported positive Phase II clinical trial results for CVN424 for Parkinson’s disease. The drug acts on GPR6, a G-coupled protein receptor that is highly expressed in striatal medium spiny neurons in the indirect pathway of the basal ganglia circuit.

Corcept Therapeutics reported its Phase II trial of relacorilant plus nab-paclitaxel demonstrated a 33% reduction in risk of death compared to the standard of care for ovarian cancer.

Ocugen dosed the first patient in the Phase I/II trial of OCU400 for retinitis pigmentosa resulting from mutations in the NR2E3 and RHO genes. OCU400 is a modifier gene therapy.

Sage Therapeutics presented data from the Phase II LUMINARY Study of SAGE-718 for Alzheimer’s disease and mild cognitive impairment. The drug is a first-in-class, oral, positive allosteric modulator of the NMDA receptor. The drug was generally well-tolerated and associated with improvement on multiple tests of executive performance and learning and memory.

Alligator Bioscience completed patient enrollment in the 600 mg dose cohort of its Phase I trial of ATOR-1017 for advanced/metastatic cancer. The drug is a 4-1BB (CD137) targeting therapy.