The largest private foundation in the world said Monday at a conference that it expects there will be a cure for Ebola by 2016, but that it doubts that science will find a cure for malaria during our lifetimes “if we can’t even cure measles in California.”

Bob More, a senior adviser for the Bill & Melinda Gates Foundation, made the remarks as part of his speech “Mobilizing Industry to Bring Innovation to the Developing World” at the well-attended CALBIO2015 Conference in San Francisco. With over 100 California life science companies and investors in attendance, the conference has become a favorite for discussions involving opportunities and scale in the rapidly innovating world of science. 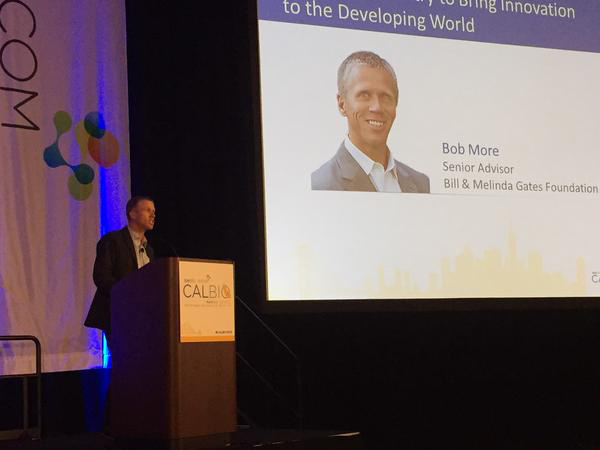 More, a former biotech venture capitalist, started off boldly, taking aim at the current model of Big Pharma and capital markets solving widespread health problems in developing countries via a fee scale. But he added that now is a ripe opportunity for sciences advances to help the poor worldwide.

"This is biology's century," he said. "Markets do not serve the poor adequately. Charity needs to fill the gap."

The Gates Foundation is controlled by its three trustees: Bill Gates, Melinda Gates and Warren Buffett and has an endowment of around $42 billion, with $28 billion of that donated by Gates alone. It has invested in public health solutions across the globe, including an increasing focus on the health of women and children, and with massive programs targeting HIV/AIDS, Ebola and clean drinking water.

That led More to the topic of public health, saying that while he does believe there will be an Ebola vaccine by the end of 2016 based on the science currently available, he is less optimistic about widespread vaccination programs that are often viewed with suspicion. It’s a challenge made less easy by the current fad of “ant-vaxxing” made popular by upper class, primarily white populations in affluent areas, like Marin County, in the San Francisco Bay.

"If we can't eradicate measles in California, how could we eradicate malaria" in our lifetime, said More. Still, More said there is always a place for a relationship between industrial leaders and large corporations and private philanthropy.

"We must go beyond philanthropy and bring innovation to underserved populations through public/private partnerships," said More. "Industry is a powerful, unbeatable force for change. Incentives work, but we need to remove disincentives first. Our fundamental belief at the Gates Foundation is that all lives have equal value."

However, More did admit that it was a challenge for him to come from the private sector and work in a nonprofit world that is often criticized for its lack of initiative and sometimes labyrinthine processes.

“This foundation has been bureaucratic, opaque and hard to deal with. That won't change overnight but it is changing," said More, adding that making investment decisions now is more complex at than at his previous positions at Frazier Healthcare Ventures and Domain Associates.

More said that VC background has helped him when vetting new candidates for funding however, saying that the Gates Foundation has made 17 investments so far under his aegis and helped him teach applicants how to talk to funders.

“Don't take no for an answer,” he said, “But do ask why, because why they're saying no is important. Don't just tell us that you are working on HIV, but tell us the value you bring.”