Biotechs by the Bay Boom With Business Bounty 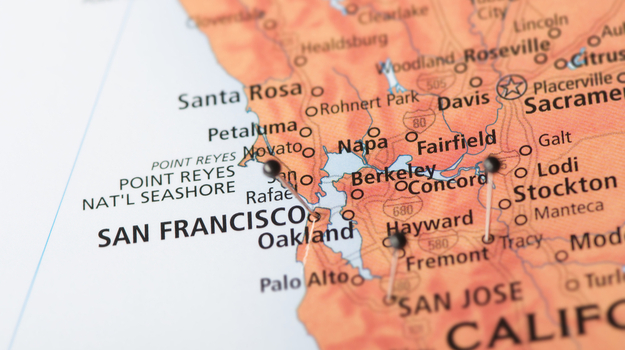 When it comes to biotech and pharma innovation few places stand out like the Biotech Bay. The area is home to a plethora of innovative companies that are shaping the future of medical treatment for a variety of diseases and conditions on a daily basis.

The Bay Area is known for its moderate temperatures, significant cultural offerings, and, of course, world-class universities such as University of California, Berkeley (CAL), Stanford University and the University of California, San Francisco (UCSF). But it’s important to note the work being done by the biotech industry. BioSpace takes a look at some of the key work being conducted by companies large and small in this white-hot hotbed region.

Genentech – One of the crown jewels of the Bay Area, South San Francisco-based Genentech is nearly synonymous with cancer research. The month of March has been good to the Roche subsidiary. The company’s anti-PD-L1 drug Tecentriq picked up two approvals from the U.S. Food and Drug Administration. This week, Tecentriq in combination with chemotherapy (carboplatin and etoposide) won approval for the initial treatment of adults with extensive-stage small cell lung cancer, a difficult to treat disease. This approval marks the first new initial treatment option for this difficult-to-treat type of lung cancer in more than 20 years. Earlier in the month, the FDA approved Tecentriq plus chemotherapy for the treatment of adults with PD-L1-positive, metastatic triple-negative breast cancer. In that case, Tecentriq was granted accelerated approval based on progression-free survival. Data from the Phase III IMpassion130 trial, showing that Tecentriq plus nab-paclitaxel significantly cut the risk of PFS by 40 percent compared with nab-paclitaxel alone in PD-L1-positive patients with triple-negative breast cancer who hadn’t received previous chemotherapy.

Genentech did have a slight setback. The FDA placed a partial clinical hold on a multiple myeloma trial being conducted by partner AbbVie. The FDA placed a partial hold on all trials evaluating Venclexta (venetoclax) for the investigational treatment of multiple myeloma. The hold was placed after a data review of a Phase III trial showed a higher proportion of deaths was observed in the venetoclax arm compared to the control arm of the trial.

Aimmune Therapeutics – An anticipated treatment for peanut allergies is one step closer to being approved. This week, the FDA accepted the Biologics License Application (BLA) for AR101, an oral biologic desensitization therapy that is sprinkled over food before eating. Aimmune initially filed its BLA in December, but the government shutdown in January forced a delay in review. Aimmune said the BLA will be reviewed under a twelve-month target review period, as measured from the January 2019 start date. As a consequence, review of the BLA may take until late January 2020, the company said. Phase III data that showed the peanut allergy therapy was effective in more than 67 percent of juvenile patients. The FDA granted AR101 Breakthrough Therapy Designation in June 2015 for peanut-allergic children and adolescents ages 4-17, which was preceded by the granting of Fast Track Designation in September 2014.

Wouter Latour, Vaxart’s chief executive officer, said the initiation of the bivalent norovirus vaccine Phase Ib trial marks a significant step towards the company’s goal of developing a vaccine that can protect the most vulnerable patients from the infectious disease.

Dermira, Inc. – Menlo Park-based Dermira aims to provide relief for atopic dermatitis. The company said in its Phase IIb dose-ranging study of lebrikizumab, all three doses of the treatment met the primary endpoint, demonstrating greater improvements in the Eczema Area and Severity Index (EASI) score compared to placebo. Based on the clinical profile of lebrikizumab observed in the Phase II study, CEO Tom Wiggins said the company believes the treatment “has the potential to be a best-in-disease therapy for atopic dermatitis.” The company anticipates it can begin Phase III development by the end of 2019.

Apple – Tech giant Apple and its wearable device product line is certainly part of the fabric of biotech in the Bay Area. A recent study presented at the American College of Cardiology used the Apple Watch as a means of accurately detecting issues with heart rhythm. The patients who participated in the large study wore the Apple Watch and were sent a notification if the smartwatch detected an irregular heartbeat. They were then followed up with an ECG for verification. The study raised concerns over a high number of false positives. As BioSpace noted in its coverage of the trial data, the study did not use Apple’s latest watch, which has a built-in electrocardiogram, which required clearance from the FDA. The study may continue using the newer devices.