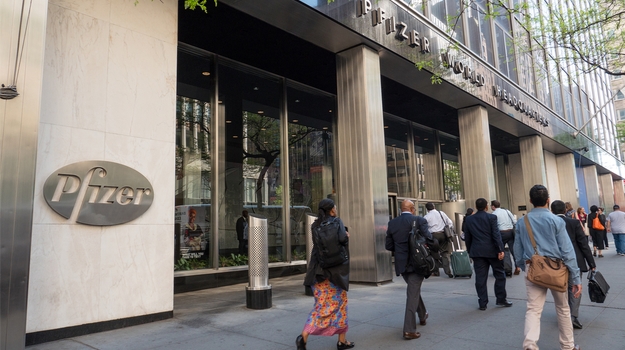 Biohaven and Pfizer are in partnership to market Nurtec migraine medicine. (pio3/Shutterstock)

Biohaven Pharmaceutical Holding Company and Pfizer have partnered to market the Connecticut-based company’s migraine drug Nurtec ODT (rimegepant) outside of the United States once approved by global regulatory organizations.

For Biohaven, the partnership with Pfizer is valued at up to $1.24 billion in combined upfront and milestone payments. Biohaven will also receive tiered double-digit royalties under the collaboration. Nurtec migraine medicine is currently under review by the European Medicines Agency and several additional regulatory authorities outside of the U.S.

Biohaven Chief Executive Officer Vlad Coric, M.D., said the marketing collaboration would help accelerate the potential reach for Nurtec migraine medicine outside of the United States. Coric noted that Pfizer has a massive distribution footprint in companies across the globe and that will benefit sales of Nurtec when other regulatory agencies approve the migraine drug.

“With this alliance, Biohaven Pharmaceutical and Pfizer believe there is an opportunity to change the paradigm in migraine treatment and potentially establish a new standard of care,” Coric said in a statement.

Migraine is one of the most common neurological disorders characterized by episodic headaches and other associated manifestations, such as nausea, vomiting, phonophobia, which is the fear of loud noises, and/or photophobia or light sensitivity. It is estimated that 12% to 14% of all people, more than a billion worldwide, are affected by migraine headaches. Of those, Biohaven estimates that the majority of migraine sufferers are women. There is a significant unmet need for new acute treatments as more than 90% of migraine sufferers are unable to work or function normally during an attack.

Nurtec ODT was approved by the U.S. Food and Drug Administration (FDA) in May prevent migraine. It was greenlit specifically for adult patients with episodic migraine, e.g., those who experience less than 15 headache days per month. It is also approved in the U.S. for the acute treatment of migraine with or without aura and the preventive treatment of episodic migraine in adults. One of Nurtec migraine medicine advantages is that the drug disperses almost instantly in a person’s mouth without the need for water.

As a gepant, Nurtec ODT method of action targets the receptors for the CGRP protein, which is associated with migraine. Gepants ease the pain and other symptoms by blocking the CGRP pathway. Calcitonin gene-related peptide (CGRP) is a popular target for the treatment of migraine and chronic headaches. Multiple companies have focused their attention on developing these treatments, including AbbVie, which acquired a robust migraine pipeline with its acquisition of Allergan. AbbVie recently won approval of Qulipta (atogepant), a CGRP receptor antagonist for treating episodic migraine headaches. AbbVie’s migraine pipeline also consists of the crown jewel of Botox and Ubrelvy (ubrogepant), another CGRP antagonist.

Nick Lagunowich, global president of Pfizer Internal Medicine, expressed his excitement about the partnership with Biohaven. Lagunowich said Pfizer’s legacy in pain treatments, as well as developing treatments for women’s health, will enable the maximization of Nurtec migraine medicine when it is approved globally. Lagunowich added the partnership has the potential to bring “a valuable new treatment option to patients living with migraine pain.”

Under the terms of the agreement, Pfizer made an upfront payment of $500 million to Biohaven. That includes $150 million in cash and a $350 million equity acquisition. Biohaven is also eligible to receive up to $740 million in milestones.

In addition to global rights for Nurtec migraine medicine, Pfizer will also gain rights to another CGRP antagonist under development by Biohaven, zavegepant. That asset is currently being studied in an intranasal delivery and a soft-gel formulation in Phase III clinical trials for migraine indications.