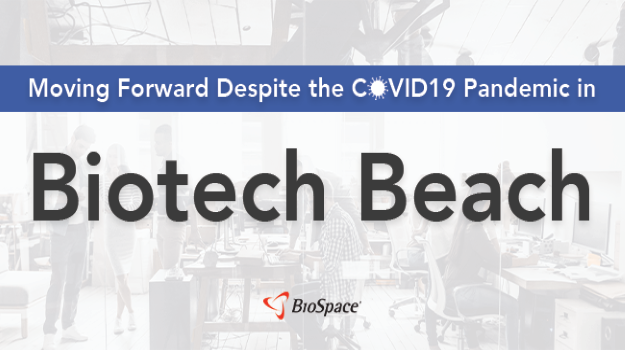 The COVID-19 battle dominates the news, but it doesn’t constitute all the news. Here’s what several Southern California Biotech Beach companies are doing that you might have missed.

San Diego-based Vividion Therapeutics is expanding the potential of small molecule drugs with a novel combination of proteomics and chemistry. Its platform makes the entire proteome druggable by small molecules. By discovering novel pockets on proteins, the company can identify and exploit small molecule ligands to specific targets.

This opens 90 to 95% of biologically relevant proteins, like transcription factors, to drugging by small molecules. The implications are significant. “Antibodies have been around for 30 years, but only about one billion of the world’s 7 billion population has access to them,” Dr. Miralles said.  Vividion’s approach, therefore, could benefit the remaining billions.

The company is built around technology that it industrialized to go after intractable targets – initially, in immunology and oncology.

There are promising leads. There are at least five programs in animal testing, but no programs are yet in human trials.

Up the coast in Carlsbad, CA, Greenwich Biosciences just announced that the Drug Enforcement Agency (DEA) no longer lists Epidiolex® (cannabidiol) as a controlled substance. Epidiolex is FDA-approved to treat seizures associated with Lennox-Gastaut syndrome and Dravet syndrome, two of the most debilitating forms of epilepsy.

All federal controlled-substance restrictions were removed immediately. Consequently, Greenwich is making the appropriate changes with each state and throughout its distribution network. After that process is completed, prescriptions for Epidiolex, like other non-controlled medicines, will be valid for one year and can be transferred easily between pharmacies. Physicians will be able to prescribe Epidiolex without the need for state prescription drug monitoring programs.

The company’s platform technology interjects non-native amino acids at sites in the natural proteins that are being made within the cells. The amino acids bear selectively linkable, biorthogonal chemical groups that enable precise, site-specific modification of therapeutic peptides, proteins, mAbs, and mAb fragments, thus adding functionality.

AveXis, a Novartis company with its R&D based in La Jolla, CA, is pressing forward on the heels of positive outcomes for Zolgensma®, its gene therapy for spinal muscular atrophy (SMA). Being the only gene therapy for this rare disease, the Committee for Medicinal Products for Human Use (CHMP) of the European Medicines Agency (EMA) recommended it for European Commission conditional approval for patients with Type 1 SMA, or those patients with up to three copies of the SMN2 gene. EMA approval is expected in June.

In March it received approval from the Japanese Ministry of Health, Labor and Welfare. The US approved the therapy in 2019.

Administered only once, Zolgensma provides a functional copy of the human SMN gene, which sustains SMN protein expression and thus halts disease progression. It has been administered to more than 400 patients and shows significant, clinically meaningful therapeutic benefit in presymptomatic and symptomatic patients. Results are sustained for at least five years after dosing.

The company is discussing the terms to enable “Day One Access” with multiple European countries. Options being discussed include:

AveXis is pursuing registration in nearly three dozen countries. Regulatory decisions are anticipated in Switzerland, Canada and Australia in late 2020 or early 2021.

In San Diego, Retrophin’s pipeline is focused around sparsentan, a single molecule designed to function as a dual endothelin receptor type A and an angiotensin II receptor type 1 antagonist. The goal is to reduce proteinuria levels in patients with serious kidney disease.

Two trials are in Phase III. In March, Retrophin announced the first 190 patients were enrolled in Phase III trials studying focal segmental glomerulosclerosis, a kidney disorder. The trial is still enrolling patients, with a goal of 300 enrollees. So far, 110 sites are involved. The other trial, for Berger’s disease, immunoglobulin A nephropathy (IgAN), is ongoing. There is no word on whether trials are proceeding on schedule or have slowed during the pandemic. Topline data for both trials is expected in 2022.

Bachem, with expertise in peptide chemistry and organic synthesis, in April reiterated its pledge to remain fully operative to ensure a “secure, uninterrupted API supply” for marketed therapeutics and clinical development. It has facilities around the world, including a site in Torrence, CA.